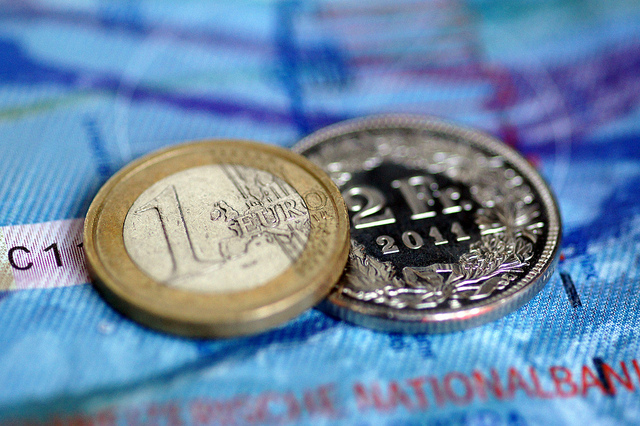 The Swiss franc soared by almost 30% in value against the euro today (15 January) after the Swiss National Bank (SNB) abandoned its three-year old cap at 1.20 Swiss francs per euro.

In a chaotic few minutes on markets after the SNB’s announcement, the franc broke past parity against the euro to trade at 0.8052 francs per euro before trimming those gains to stand at 1.0350 francs.

It also gained 25 percent against the dollar to trade at 0.8900 francs per dollar.

The SNB has been resisting heavy pressure in recent months on the cap it imposed in September 2011 on the stellar rise seen in the franc’s value due to investors seeking a haven from the eurozone’s economic and political troubles.

The prospect of outright money-printing by the European Central Bank as early as next week has added to the pressure, with the SNB seen by players in the market as buying euros consistently around 1.2009 francs per euro in recent days.

“It has taken the market by complete surprise,” said Jonathan Webb, head of FX strategy at Jefferies in London.

“The SNB probably expects the ECB to launch QE next week and along with the Greek elections coming up, it would make it pretty tough on the Swiss to keep bidding the euro. So they have abandoned the cap and cut rates deeper into negative territory. We expect euro/Swiss to trade around 0.90-1.00 francs after all the stop loss orders have been cleared.”