Tsipras and Merkel to meet at EU summit 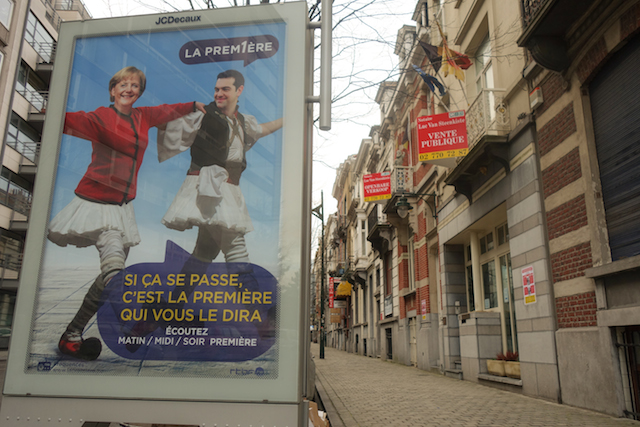 Prime Minister Alexis Tsipras will meet German Chancellor Angela Merkel on the sidelines of an EU summit in Brussels Thursday (23 April), the eve of a crucial meeting of eurozone finance ministers to assess progress made by Athens in its reform pledges.

Since taking power in January, Tsipras’s leftist government has been locked in talks with its EU/IMF lenders over a deal that will disburse further aid to the country, but risks running out of cash within weeks if the two sides fail to agree.

Germany is the European Union’s main paymaster with the strongest influence on how Greece’s crisis would be resolved.

On Tuesday, European Commission President Jean-Claude Juncker urged Greece to step up efforts to strike an agreement with its international creditors, warning that talks were not advanced enough to find a quick solution.

But Greek Finance Minister Yanis Varoufakis told reporters that there was convergence and expressed optimism that a pact would be reached although this may not happen in the 24 April meeting of eurozone finance ministers.

“There will be a deal,” Varoufakis told reporters in Athens. “There is clear convergence … But this does not mean that there will be an agreement at Friday’s Eurogroup.”

The head of the Eurogroup, Jeroen Dijsselbloem, said he expected Athens and its creditors to forge a new agreement in the coming weeks.

In a sign of how extreme the financial constraints on Tsipras have become, Athens on Monday ordered state entities, ranging from municipalities to a fund meant for future generations, to park idle cash at the central bank.

While Greece has already been tapping into the cash reserves of such entities through repo transactions, Monday’s decree angered labour unions, opposition parties and local government officials who threatened to take legal action.

“They had promised not to touch this money but yet they are taking it,” said Costantinos Agorastos, head of the Greek prefectures union. Agorastos said the cash reserves of local government bodies totalled about €1.5 billion.

“Don’t even think about it!” Greece’s largest labour union said in a strongly worded statement referring to the fund for future generations, which has cash reserves of about €3.5 billion.

Deputy Finance Minister Dimitris Mardas defended the decision on Tuesday as “necessary to raise the liquidity of the Greek state”.

Athens must repay the International Monetary Fund almost €1 billion next month and could soon be forced to choose between making wages and pension payments or meeting its debt payments.

Citing rising uncertainty due to the prolonged negotiations, the influential Athens-based IOBE think-tank revised its GDP growth forecast for the country this year down to 1.0% from 2.3%.

“Neither they (the lenders) nor we will miss the chance of reaching a deal which is clearly beneficial for all parties,” Varoufakis said. “No agreement would be destructive for all of us.”

0 responses to “Tsipras and Merkel to meet at EU summit”