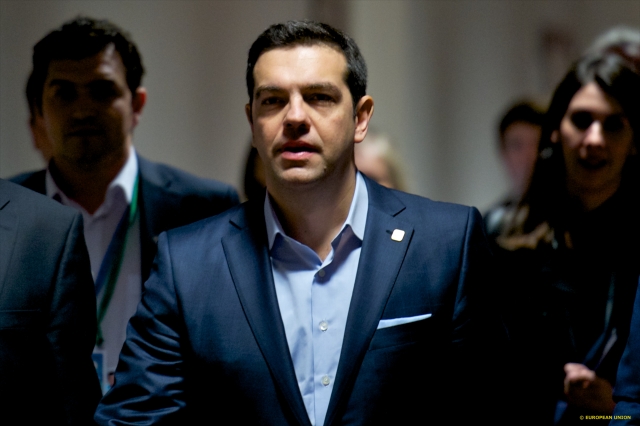 Greek Prime Minister Alexis Tsipras repeatedly said during an EU summit on Thursday (12 February) that the “Troika is over.” But he also agreed to a resumption of crisis talks with the three creditor institutions in the coming days, initiating what appears like a climb down.

Tsipras, a far-left politician who swept to power last month on a wave of anti-austerity protest, spoke at length about Greece’s sovereign debt problems following the summit yesterday evening.

Discussions were kept to a minimum amongst leaders however, since formal talks will resume at the Eurogroup meeting of finance ministers next Monday (16 February).

“Greece only played a small part in today’s summit,” German Chancellor Angela Merkel told journalists after the meeting, insisting that the issue was deferred for discussion to Monday.

Greece’s €240 billion bailout package expires on 28 February, but the new Greek government refuses to cooperate with the “Troika” of EU/ECB/IMF officials overseeing Greece’s finances. Instead, Athens is demanding a “haircut” on private bond holders that would reduce its huge debt pile.

In a packed room, Tsipras declared that “bailouts with devastating austerity measures… this is over.” He said his government had been crystal clear about concrete proposals on the next steps for the country. The Greek government wants a “bridge programme” that should entail reforms, but only ones that it can accept.

“The Troika is over,” Tsipras stated.

Troika comes back by the window

However, only a few hours earlier, Tsipras and Eurogroup president Jeroen Dijsselbloem sent out a statement agreeing to ask the Troika, referred to as “the institutions” in the message, to perform a “technical assessment” aimed a settling Greece’s debt problem.

“[We] agreed today to ask the institutions to engage with the Greek authorities to start work on a technical assessment of the common ground between the current programme and the Greek government’s plans,” tweeted Jeroen Dijsselbloem, the chairman of euro zone finance ministers.

The meeting will take place on Friday and should pave the way for crucial discussions between euro zone finance ministers on Monday (16 February).

It remained unclear whether the meetings would take place in Brussels or Athens and whether Greece would be represented at ministerial level or by lower-level officials.

Sensitivity surrounding Tsipras’s attitude towards the Troika was emphasised by EU officials who referred repeatedly, if ironically, to the meeting of “the institutions formerly known as the Troika”.

The Greek Prime Minister, for his part, preferred referring to a “political” discussion rather than a technocratic assessment involving the hated trio of Greece’s creditors.

“All these discussions and today’s developments signal the intention for a political agreement,” said the 40-year-old leftist leader.

Tsipras said his goal was a transition to a new financing programme and that reaching a technical agreement on Monday in Brussels would also mean a political agreement.

Meanwhile, Dijsselbloem said that reaching a deal on Greece’s emergency financing will be possible at the technical level but warned that a political agreement with the country’s new leftist government will be “very difficult”.

“I am optimistic that we will have an outcome on the technical process because I think that is a matter of simply comparing different measures and content of the programme [and Syriza’s programme],” Jeroen Dijsselbloem told reporters as he left the summit yesterday.

The procedural step forward came after the ECB’s Governing Council extended a cash lifeline for Greek banks for another week, authorising an extra €5 billion in emergency lending assistance (ELA) by the Greek central bank. The council decided in a telephone conference to review the programme on Wednesday (18 February).

In Wednesday night’s Eurogroup meeting, Greece and its international creditors failed to agree on a way forward for the bailout programme. Tsipras stated that the decision not to sign a joint statement was made collectively in his government.

The Greek premier said he did not feel isolated at the summit. He said he took the floor and expressed his opinions to the EU leaders as well as put forward Greece’s proposals. He added that the Spanish Prime Minister Mariano Rajoy “seemed a little bit nervous” when the Greek Prime Minister spoke. Tsipras suggested that this must have been due to Rajoy’s domestic problems, referring to the surge in the Spanish polls for the leftist party Podemos.

Tsipras’s relations with Brussels are seen as a test-bed for how any potential future dealings with a radical Podemos-controlled Spanish regime would work, if the Spanish radical party performs well in a general election scheduled for December.

Tsipras, attending his first Brussels summit as prime minister, said he was very confident that EU member states together could find a “mutually viable solution”. The far-left leader said this was necessary in order to heal the wounds of austerity, to tackle the humanitarian crisis across the EU and to bring Europe back to the road of growth and social cohesion.

Asked how cordial her meeting with Alexis Tsipras had been, Merkel stated, “We said hello,” leaving little doubt that the Greek premier was not a subject she wanted to discuss at length.

French President François Hollande steered a diplomatic path between the fiscal hawks and his Socialist Greek counterpart. “Tsipras has to fulfill the pledges he has made to his electors,” Hollande said, adding that a compromise could and should be sought and that Tsipras was capable of delivering that.

The Finnish Prime Minister Alexander Stubb appeared to be worried, on the other hand.

“Time is running out. I think the key is to find a continuation of the programme post-February but that entails structural reforms so in many ways we are in square one. I think that in the past five years we have done everything we possibly could to keep in the eurozone and we will continue to do that. Commitments are commitments and we must all stick to them,” Stubb said.

Philippe Lamberts, the Green Belgian MEP, also reflected some impatience with the Greek negotiating position. He welcomed the resumption of technical behind the scenes talks tomorrow between the institutions and the Greeks. “It is about time they started talking specifics because since the Greek election there has been no hard technical talks, just sound-bites.” Lamberts said that sooner or later, Tsipras has to test his arguments “in front of his creditors, not the cameras”.

For his part, Tsipras said that those who accused him of not fleshing out a detailed offer to Greece’s creditors should look to the other side. “Where are their proposals?”, he asked.