Tsipras meeting with Merkel and Hollande in doubt 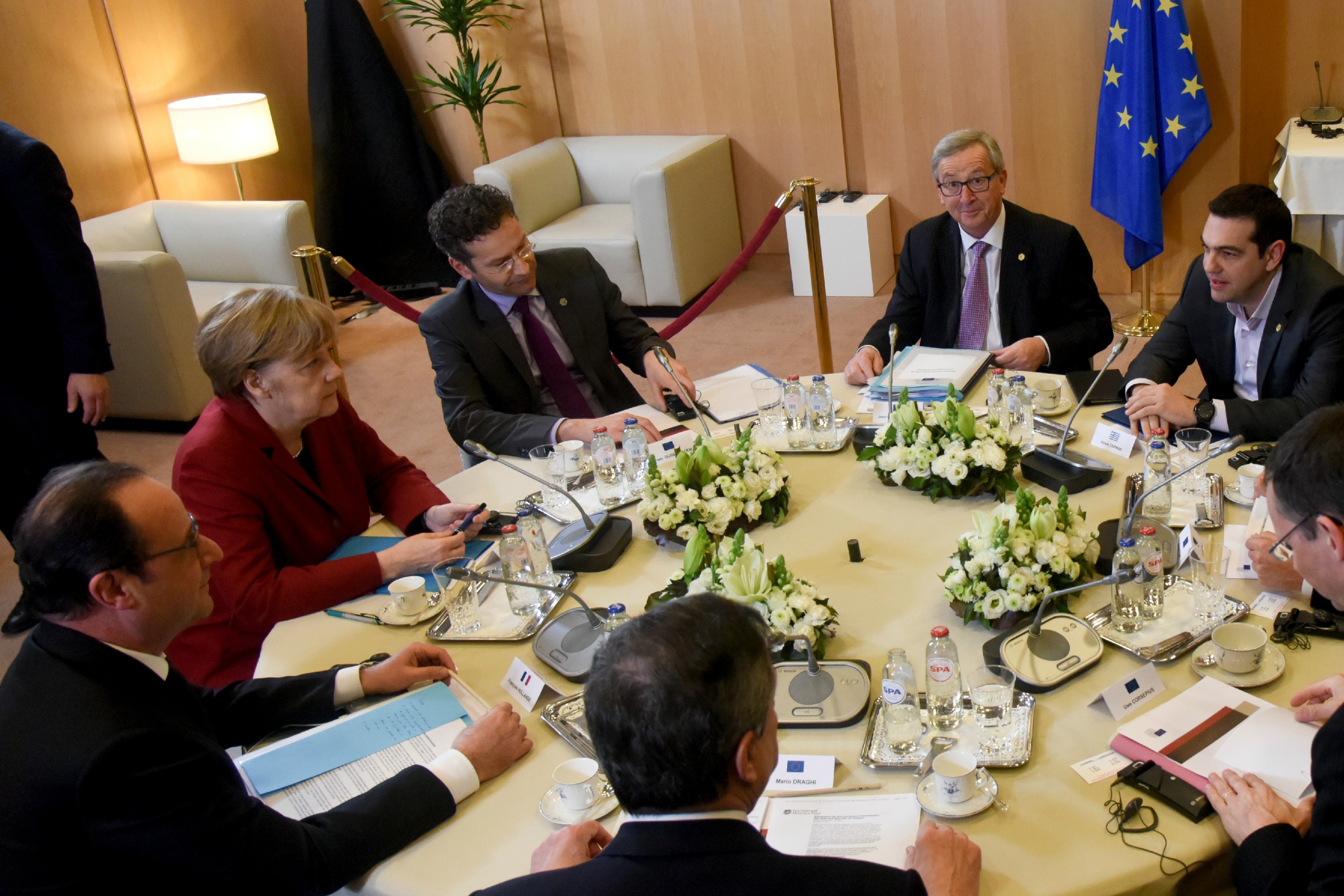 A planned meeting between the leaders of Germany, France, and Greece today (10 June) is in doubt after Greece’s reform proposals to unlock new funding to ward off a debt default fell well short, European Union officials said.

Chancellor Angela Merkel, President François Hollande and Prime Minister Alexis Tsipras were to have met to clinch a political agreement on technical proposals submitted earlier by Greece on the fringes of a summit of EU leaders and heads of state and government of Latin American countries in Brussels.

An agreement on a set of reforms that Greece would implement in exchange for new loans would save the country from bankruptcy and a possible exit from the euro.

But the meeting looked doubtful on Tuesday evening as new proposals presented by Greece to the institutions representing the creditors were seen as insufficient and no new talks with Greek representatives were scheduled for Tuesday.

European Commission chief Jean-Claude Juncker is unlikely to be present at today’s meeting, after his own head-to-head with Tsipras last week in Brussels disastrously ended with the Greek premier dismissing Juncker’s “absurd proposal”.

Juncker told fellow European commissioners on Tuesday that a new Tsipras meeting would be a “waste of time” and that it would be “better to meet with the Latin Americans”, an EU source said.

Tsipras and his finance minister Yanis Varoufakis have repeatedly made statements which the creditors took as offensive.

>> Read: Varoufakis: Greece’s creditors have turned negotiations into a war

Greece submitted late on Monday a proposal on fiscal targets but did not address in it how it would arrive at them. The primary surplus targets in the Greek paper were also marginally below those requested by the creditors, officials said.

Athens also sent in a document on debt restructuring, which the creditors dismissed as irrelevant now, because Greek debt sustainability could only be discussed once it implements reforms promised in exchange for aid it has already received.

Reforms that would ensure reaching the discussed fiscal goals have been the main point of negotiations between Greece and the European Commission, the International Monetary Fund and the European Central Bank which represent Athens’ creditors.

After a meeting between European Commission President Jean-Claude Juncker and Tsipras on 3 June, the Commission requested a revised proposal from Greece that would explain how it wanted to reach fiscal targets in an alternative way, given it rejected measures on pensions and Value Added Tax proposed by the lenders. Greece promised it by last Thursday.

But the proposal arrived only late on Monday night and the creditors said that it lacked answers to the concerns they expressed last week.

While more talks between Athens and the institutions could take place on Wednesday, the creditors say it is now impossible to disburse the reminder of the money available to Greece under the existing bailout – €7.2 billion – without a formal extension of the bailout beyond its 30 June expiry date.

Greece and its creditors were debating a possible extension of its current eurozone bailout programme until March 2016, when the IMF portion of its bailout expires, sources told AFP.

Beginning of the end

Meanwhile in Athens, Tsipras issued a dire warning that the fate of the eurozone, the central plank of a European project formed in the ashes of World War II, was at stake if the negotiations fail.

“I think that is evident. It would be the beginning of the end for the eurozone,” Tsipras told the Italian newspaper Corriere della Sera.

Yet Tsipras is also facing huge pressure at home from the hardline wing of his own Syriza party, which has vowed to resist any attempt to bow to the demands of Greece’s creditors.

He urged his party during a closed door meeting on Tuesday to “back the efforts of the government”, saying that they were at the most “crucial and substantial point in the negotiations”, according to the semi-official Ana news agency.

Any agreement will still require the approval of the eurozone’s finance ministers, the Eurogroup, who have grown impatient with the unwillingness of leftist-led Athens to deliver on reforms for cash.

Eurogroup head Jeroen Dijsselbloem warned Greece against any undue optimism with so much still left to be negotiated.

“It underestimates the complexity of what is being required from them, to bring the (Greek) budget back in line and get the economy back on track,” Dutch finance minister Dijsselbloem said in a weekly radio address.

Last week Greece bundled up a €300-million payment to the US-based IMF until the end of June, when a total of €1.6 billion will be due, making it the first country since Zambia in the 1980s to choose that option.

Sources said the new Greek offer also included a bid by Athens to delay huge repayments due to the ECB this summer by transferring that debt to the ESM, the crisis-fighting liquidity fund controlled by European governments.