The Greek head of state tried to rally French support for his cause yesterday, but France, like Germany, is keeping the new Prime Minister at arm’s length. EURACTIV France reports.

Rarely has a visit from a new head of state been the subject of such anticipation.

In the space of a few hours on 4 February, Alexis Tsipras visited Jean-Claude Juncker, Donald Tusk and Martin Schulz on his tour of Brussels.

He received a warm welcome from the Commission President, who took him firmly by the hand as the pair left the room. The gesture was widely reported on, including by EURACTIV, and if the assembled members of the press expressed their surprise, the Greek leader appeared to take it in his stride.

“We have our goal, which is to respect the people’s sovereignty in Greece and the clear mandate of our people, and at the same time we respect the rules of the EU,” Tsipras said. “We want to re-correct this framework, not to smash this framework. We believe we can find a common, viable solution for our peoples”.

The new Greek Prime Minister referred to his task ahead in the context of the political disagreements that periodically beset the EU. “The history of the European Union is a history of disagreements, but at the end of the day, also of compromises and agreements. We have to work in this direction, in order to find a mutually acceptable agreement and compromise for our common future,” the Syriza leader said. 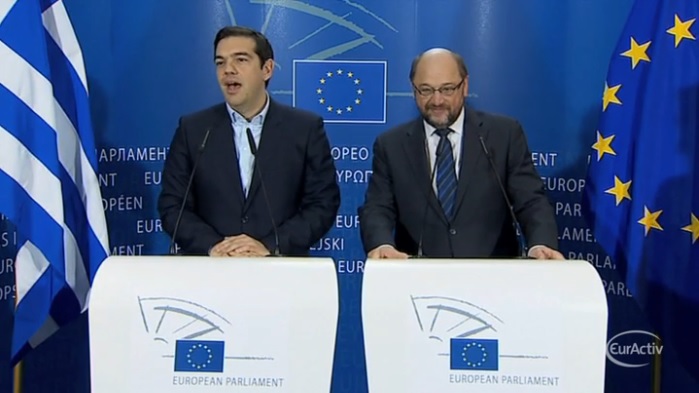 Received like a rock star by a crowd of photographers outside the French Presidential Palace, the open-collared head of state stepped his efforts up a gear to try to rally the hesitant French leadership to his cause.

After a meeting of over an hour with the French President, the two men delivered rather different assessments of the situation.

The same objectives, but…

“We share some common objectives: increasing solidarity in Europe, making the EU more political and more focused on economic growth,” François Hollande said. The French President added that “The Greek question has been on the table for four years, and it is time to find a long-term solution.”

Hollande said that it was important not only to respect the wishes of the Greek people, but also the European rules and the promises made by all the European states regarding national debt. Greek debt currently stands at €320 billion, a fraction of France’s €2000 billion debt.

This is the major problem of the “Greek question”: How to accommodate the demands of Alexis Tsipras’ government regarding the recalculation of his country’s debt, without passing the bill on to other states.

Alexis Tsipras delivered the most political speech of the day, in which he approached Brussels with caution and then called for a change of EU policy “for the return of growth”.

“We certainly need France playing a role of guarantor, a protagonist for this political change,” he said. Tsipras also noted the importance of respecting the rules of European cooperation.

“In the eurozone, there are not landlords and tenants, we are all flatmates,” he added, in reference to the hard line taken by Germany on the debt question, often perceived as the party responsible for the drastic austerity measures imposed on Greece.

According to a document revealed by Reuters, the German government plans to ask Greece to go back on the promises it made following its election victory, and hopes to maintain the Troika, which represents the Commission, the IMF and the ECB.

A high-ranking French source told EURACTIV that “the Tsipras roadshow was not all that convincing”. While the popularity of the young Prime Minister is welcome, the French appear to be just as sceptical as the Germans: they fear his waxing lyrical could cost them dearly.

“Tsipras has the Mélenchon style,” a French government source said; a less than flattering comment coming from a Socialist leader.

Since last summer, polls have shown that an early election would bring the Syriza party to power. The radical left wing party was Greece's biggest winner in the 2014 European elections.

In December, the Greek government decided to call an early general election, to be held on 25 January. The Syriza leader, Alexis Tsipras, won a convincing victory, with 36.5% of the vote. Syriza now holds 149 of the 300 seats in the Greek Parliament, and has formed a coalition government with the party of Independent Greeks.

This victory will bring in a period of difficult negotiations with other European leaders, as Tsipras promised the Greek electorate he would put an end to the period of austerity and renegotiate the national debt with the EU, the ECB and the IMF.