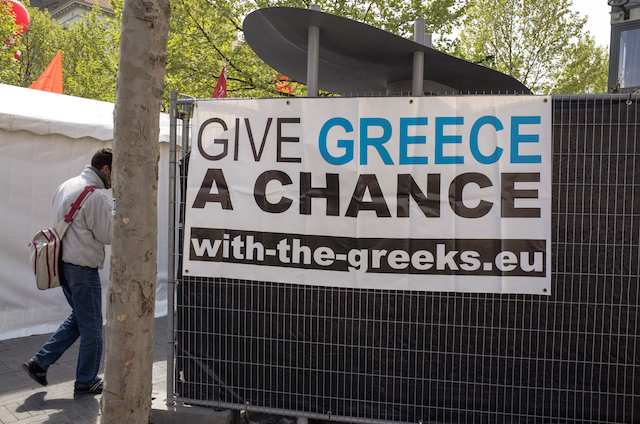 The Greek crisis is just the latest of one of more than 600 national debt crises worldwide since the 1950s, and makes a compelling argument for the creation of an international institution for the fair and orderly resolution of sovereign bankruptcy, writes Bodo Ellmers.

As the modern day Greek tragedy reaches its climax, the global debt justice movement has launched a major campaign calling for a resolution that would avoid disaster.

The call is for debt cancellation for Greece, but it goes much further, asking for a European debt conference and the creation of fair United Nations rules to solve future debt crises wherever they may occur. And this call has already been answered by more than 12,000 people in less than a week.

Many more Greeces could be coming

Greece is the most prominent debt crisis in Europe, but it is just one of more than 600 such crises globally since the 1950s. This is testament to the fact that there are no institutions for the speedy, fair and orderly solution of debt crises. The political dynamic created by Greece should spark a major overhaul of the way this is tackled.

Why did it go so wrong for Greece?

With a debt to GDP-ratio of almost 180%, there is little doubt that Greece is de facto insolvent, and it has been for a long time. Previous attempts to delay the filing of insolvency aggravated the problem. Actions since 2010 have simply changed the creditor structure, from private to public creditors, but never really reduced the debt burden.

The austerity policies implemented over the past five years strangled the economy. Today the annual output is three quarters of what it was in 2010. Greece is stuck in a downward spiral where the need to service high debts leads to fiscal cuts, which shrinks the economy, making the debt burden more severe.

No-one will invest in Greece as long as the debt crisis remains unresolved, so there will be no growth. Without growth the debt pile cannot be paid off. Developing countries were stuck with this situation since the 1980s, and remained stuck until major debt relief initiatives made a new growth cycle possible. The cancellation of a large share is proven to get a country and its economy back on its feet.

Why the banks should finance debt cancellation

Debt justice groups argue that it should not be the taxpayer that foots the bill, it should be banks.

Greece managed to accrue €160bn extra debt between 2000 and 2009, the lion’s share from foreign banks and other foreign creditors. This happened while the fiscal deficit was beyond 3%, and tax income went down. Driven by greed, private creditors lent irresponsibly.

When the crisis started, they were bailed out. Since May 2010, the Troika has lent €226.7bn to Greece. Only 10% of the loans funded the fiscal deficit of Greece, about 90% were used to pay off old loans.

European legislators acknowledged that banks should take responsibility for the risks they take when they passed the 2013 Bank Recovery and Resolution Directive (BRRD). In future, huge bank bailouts at the taxpayers’ cost should not happen, as responsibility to care for banks whose speculations failed should be transferred from the public sector to the financial sector.

But for now it is necessary to recover the money from those who profited from the bailout.

Why a European Debt Conference is needed

So how can a major debt cancellation operation succeed where repeated meetings of the Eurogroup, the IMF Executive Board and other bodies dealing with Greek debt have failed?

Good practice examples for the sustainable solution of debt crises exist. One is the London Debt Accord of 1953 that addressed Germany’s unsustainable debt problems after the Second World War. This conference convened the debtor and relevant creditors, and renegotiated the whole debt stock in one comprehensive process. (Under the current circumstances this is not possible. Greece would need to negotiate for years with a myriad of different creditors separately.)

The negotiations were also led by an independent arbiter who made a proposal to the different parties (which is missing at current debt forums).

Finally, the repayment plan did not strangle Germany’s economic growth, by making repayment of the remaining debts dependent on the generation of trade surpluses.

Why fair UN rules are needed

Most debt cases have affected developing countries. State insolvencies are a recurrent pattern in capitalist economies where financing conditions continuously change, and the path of change is largely unpredictable. Now, creditors and debt instruments are spread across the planet, and when debt needs to be restructured there are many different jurisdictions involved.

For corporate insolvencies, there are laws which ensure that insolvency procedures are orderly, fair and predictable. Insolvency courts which are independent from creditors and debtors make decisions based on clear criteria, and enforce them. For state insolvencies, no such framework exists.

This has been branded a ‘gaping hole in the financial architecture’, by IMF senior management. Several attempts to fill that gap have been made, but failed due to political blockades.

The latest and most promising is the UN effort to create a multilateral debt restructuring framework. Had such a framework existed back in 2010, the Greek crisis could be solved.

Work at the UN General Assembly to create this has strong support from the majority of member states. A minority – shamefully including many EU member states – are once again blocking this initiative.

The new petition launched by the debt justice movement protests against this blockade and pressures European governments to participate constructively in a regime-building process that is in its own interests.

As lessons are learned from the Greek crisis, now is surely the time for the EU to step up and back concrete change.