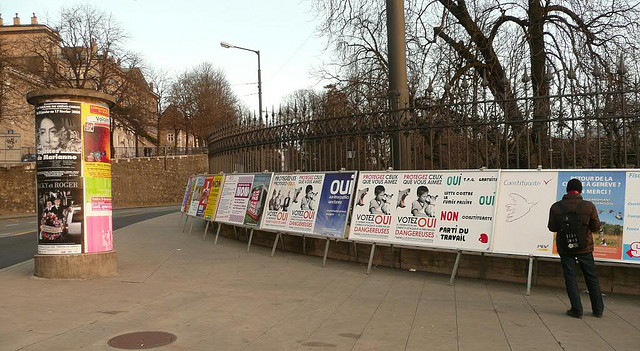 Guido Cozzi is Full Professor of Macroeconomics at the University of St. Gallen, Switzerland.

The Greek government’s decision to call its citizens to vote on whether to honour their sovereign debt could not be more disastrous in terms of the economic news. It has already spread panic in the financial and currency markets, even more than a similar, then aborted, referendum proposed by Greek Prime Minister George Papandreou in 2011.

Greece is currently swimming against the tide of enormous capital outflows, with the potential to drag down the euro and stronger currencies such as the Swiss Franc, which is appreciating to levels hard to sustain by Swiss exporters.

So, is direct democracy necessarily harmful for the economy? An unexpected answer can be found at the very opposite end of the current financial mayhem: in Switzerland, where even municipal public expenditure requires each citizen’s direct approval. The Swiss model of direct democracy has its residents going to the polls approximately four times a year for their approval of even municipal public expenditure. Such direct democracy has given mandate to spending cuts that would elsewhere be politically impossible. For example, in 2013 when the skiing lobby of Grisons Canton – host to St. Moritz and Davos – wished to propose the Canton’s candidacy for the Winter Olympics, it stumbled into an unexpected popular “No”. In a similar vein, in February 2014, the Swiss people voted down the introduction of public kindergardens, instead approving the expansion of national rail infrastructure.

Swiss direct democracy guarantees stability in public finances by seeking public approval for every significant piece of public finance legislation. This avoids a situation where powerful politicians, elected every four years based on their ideology, could impose expenditures or tax cuts which were not included in their manifesto and passing the inevitable bill to a future administration. In the more pragmatic Alpine country, politicians have very limited power over taxpayer’s money, and voters want to know exactly what they are going to pay for. As a result, the Swiss federation, despite years of stagnation and deflation, has government debt of just 35% of GDP.

Contrast this with Greece, whose debt/GDP ratio has exceeded 170% and whose government has not directly consulted its taxpayers on public finance issues – or indeed any legislation since the Republic referendum of 1974. This referendum is not about how much to spend, but whether the government can renege on cumulated sovereign obligations. This simply discredits direct democracy – in the very country that gave birth to the word “Democracy”, originally meaning “rule by the people”.

If Greece really wishes to use direct democracy in a way that does not delegitimise its government, it could emulate another Swiss example. In 2001, the Swiss voted “Yes” in a referendum about a “debt-brake” constitutional clause.

This clause does not require governments to always balance their budgets, but it forces them to do it more reasonably. The clause de facto mandates running a budget surplus during periods of economic growth to finance a deficit during periods of recession – effectively applying a public finance rule advocated by Keynes. Such a referendum would credibly commit this and future governments to stable fiscal management, this is especially beneficial to a politically turbulent country such as Greece.

Expectation is the bloodline of financial markets – such a hardwired guarantee that federal debt can never get out of control would send a reassuring sign to the markets, and would help mitigate an unfortunate yet likely after-default shock.