Ambassador: Ukraine succeeded to put security at the centre of Eastern Partnership 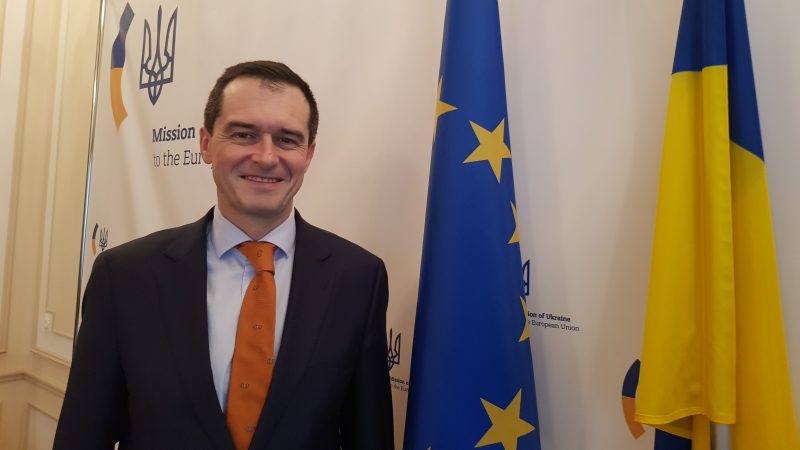 In an interview with EURACTIV, Vsevolod Chentsov, the Ambassador of Ukraine to the EU, discussed last week’s Eastern Partnership summit and EU summit, tensions with Russia, Nord Stream-2, NATO aspirations, and his country’s security strategies.

Vsevolod Chentsov is a career diplomat. Before being appointed Ambassador of Ukraine to the EU in August 2021, he was Ambassador to the Netherlands.

Mr Ambassador, we speak two days after the Eastern Partnership (EaP) summit and the day after the EU summit in which the situation around Ukraine was part of the agenda. Are you satisfied with the level of EU support your country obtained?

The participation of the President of Ukraine in the EaP summit and his bilateral meetings with the EU leadership helped frame this discussion and make the Ukrainian point of view quite clear. The threat is there, Russian troops are present at the Ukrainian border, Russian equipment is there, there is no withdrawal in spite of promises and announcements, and we need to work together with the EU, with NATO, with our main partners like the US, to build up a deterrent and to keep the situation under control. We don’t need to wait until the situation gets worse. The president made this point very clear, that pressure on Russia, including sanction pressure, should be used to get Russia engaged, to make them sit at the table and talk, and not just wait until the situation escalates, and only then think about eventual retaliation.

That was the point the Ukrainian president made. I would also like to highlight that this summit was special because the issue of security in the context of the EaP was dominant. We, the Ukrainian side, tried to push for this, and we succeeded. And it’s not only about Ukraine. Definitely, we delivered this point about referring to things the right way: this is the Russian war against Ukraine. Whatever broader geopolitical interest they have, they are waging war against Ukraine. We explained that the situation is serious, and it would be naïve if someone would think about developing trade, sectoral cooperation in this region without fixing security problems. The good thing is that we are not alone, a number of member states think alike and made it clear. And the general understanding in the EU at the level of member states is improving.

Other regional conflicts, Nagorno-Karabakh, the situation around Armenia and Azerbaijan, were also discussed, and in that regard, the summit was also special. For the first time, there was not just an exchange of accusations between the two countries, but real progress in terms of engagement of the EU, and personally of the President of the Council, trying to deliver concrete results, and there was well-guarded optimism expressed by Armenia and Azerbaijan. This is an example of how the EU can deliver.

Yes, definitely, it exists, and also post-conflict rehabilitation, the economic revival of the region is a natural sphere can really deliver. The point was made by the relevant parties about the construction of the railway line. I see real potential here.

It was the Armenian president who referred to this potential project which could unite the two countries and really give a boost to the development of the region. Once again, it’s about confidence-building measures, it’s about demining, it’s about exchange of prisoners, it’s all issues related to the security dossier. And then you can build on that and go beyond security and contribute to the development of institutional stability, trade and economic development. This kind of EU engagement made this summit quite special.

Is this symptomatic for a new EU role in areas where previously other institutions, such as the OSCE, were in charge?

They are still in charge, but I think the EU can play a role here. Not substituting somebody, but playing its own distinctive role.

Regarding the conflicts concerning Ukraine, conflicts which you called war, there is the so-called Normandy format, in which the EU is not a player, it’s a format in which Russia, Ukraine, France and Germany are participating. Now there is also a discussion about involving the US. But the bottom line is that this process has come to a standstill…

It’s not the fault of  Ukraine or the EU and the specific member states you mention. There was a very clear will and actions of the Russian Federation to slow it down and freeze it. Now we try to revitalise the process. President Zelenskiy met both leaders, the new leader of Germany and President Macron, and there was a discussion on how to get Russia engaged.

Do you think that the new German leadership could make a difference? Recent press reports suggest Merkel has twice vetoed the sale by the US of arms to your country through a NATO procurement scheme…

I cannot comment on actions or lack of actions of the previous German government. What we need to concentrate on now is building ties with the new government at all levels. What is positive is that there is a will to participate in this format, which was confirmed under the Normandy trilateral meeting. You said that in this format, Germany and France are actors, but I would consider this a European format. The French president made an appeal to the EU leaders to invest politically in this peace process, so we should rather say the EU is represented by France and Germany.

The new German government may also have a different view concerning Nord Stream 2, and putting or not the pipeline in action also appears to be powerful leverage. What is Ukraine’s view on that?

We need to distinguish a few things. We don’t consider this pipeline an economically feasible project or a European project. The European Commission never supported it as of common interest. That’s why it needs to be scrutinised according to EU rules. The bilateral US-German declaration that was adopted in July and the promise that energy should not be used as a weapon should be implemented also in the context of the future certification of the project.

Why is it important that the pipeline is also scrutinised by the European Commission? It is a way to make sure it will not be used as a weapon. If it is used as a pipeline, it’s one issue. If it’s used for the Kremlin to have more political influence in the EU, it’s something else. It’s important that our friends in the EU don’t deceive themselves.

Let’s call a spade a spade. Do you agree with this analysis: Nord Stream 2 and its southern version, TurkStream, were designed by Moscow to eliminate Ukraine from its role as gas transit country. Gas transit was for Ukraine a security guarantee that Russia would not do something foolish against it. Without transit, there is no security guarantee, and this is the real problem.

I agree with your analysis. I wish that the EU institutions and the member states would do the same. And if it was not clear for them a few years ago, when the development of this project started, it should be clear for them at least now. And they need to do whatever possible now, not to allow third parties to get more influence and monopolise the gas market, and indeed to create a new challenge to the security of supply and to political stability in the EU.

We had a preview a few weeks ago when energy prices started to climb with all possible consequences, including political consequences for the member states. It was a strong, good lesson and should have rang the bell for many here in the EU, including the beneficiaries of the new projects. We can admit that the industries in the member states have their own legitimate goals, but it’s for the governments, for the European institutions, to consider this situation in its all complexity. And also to explain to the industry the consequences of that type of deal with Gazprom.

Ukraine has changed a lot since Maidan. Do you think it is realistic that Ukraine would become a NATO member?

I can only repeat what President Zelenskiy said during the summit, that it is Russia pushing Ukraine towards NATO. If towards the beginning of this war, the support for NATO membership was 30%, and now it is 70%, this is a result of the Russian aggression.

Can I paraphrase your president: if Russia was less aggressive, Ukraine would not be tempted to join NATO?

It is difficult to imagine what could have happened. I wish the Kremlin never made this choice to annex Crimea and to create this war in the East of Ukraine. I hate to speculate here. But if the standards of our armed forces would reach those of NATO member states, we would be able to withstand the pressure.

Do you mean NATO membership is one thing, but reaching the NATO standards is equally important?

You are referring to the memorandum of 1994, according to which the West gave security guarantees to Ukraine in exchange for the withdrawal of Soviet nuclear weapons from its soil…

The EU is not uniform with respect to Ukraine. Some countries like Poland and the Baltics are very supportive, others like Italy or even France are less. How does this divided EU look to you?

It’s not an easy task to build consensus on the issue of foreign and security policy, but we definitely see substantial progress here. And this EaP summit was special in that regard, too, because many countries on the Southern flank, they called things by their proper name. And why is it happening – it’s because there is a better understanding of the situation around Ukraine, there is a better understanding of the origins of this conflict and the motives of the Kremlin, especially now, with this escalation of the situation at the border and the so-called Russian proposals regarding their security guarantees. So finally, they made it clear it’s not about Ukraine but repositioning themselves as a global power.

Is there a risk that during the next discussions between presidents Biden and Putin, they reach an agreement that will leave Ukraine in the Russian zone of control, that the US would accept that this country and others are a natural buffer for Russia?

To Yalta. And even if our neighbours to the East want to get us in this time machine and find themselves 70 years back, it’s not possible. The world has changed, other issues are now at stake. It’s not about moving borders and division of territories; it’s about trade, economic development, innovation, it’s about soft power. These days real-world powers influence the world from completely different means and instruments.