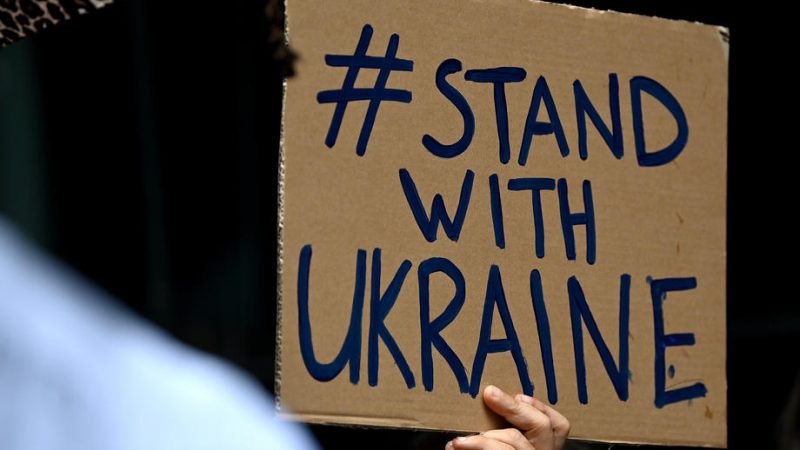 epa09783013 Protesters hold signs during a rally against the war in Ukraine. 25 February 2022. EPA-EFE/BIANCA DE MARCHI AUSTRALIA AND NEW ZEALAND OUT

“Full-scale Russian invasion of Ukraine changes history and is a threat to the whole continent. Europe is facing a period of instability and increased risk. Vladimir Putin is ready to destroy the European security order, which guaranteed sovereignty and security to small states. It is a great threat,” he said in the interview.

Šimečka praised the unity of European leaders in denouncing Russian aggression towards Ukraine and their intentions to implement far-reaching sanctions. “I don’t see many voices disrupting European unity, and that is good. Even politicians we considered pro-Russian, as Czech president Miloš Zeman, denounced the aggression and called for shutting Russia out of Swift,” he said.

This is in contrast to the statement of Ukrainian president Volodymyr Zelenskiy, who said he was disheartened after speaking to western leaders.

One of the measures which Zelenskiy called for was shutting Russia out of Swift – a global banking system with no alternative. Supposedly, it was, however, rejected by certain European member states.

“It is normal that member states prefer different measures in the final sanction package, but there is basic agreement that we are facing an unprecedented threat, which requires an unprecedented response,” Šimečka explained.

According to Šimečka, it makes sense to leave room for scaling-up sanctions. “I am, however, for the toughest sanctions possible. Even though they will hurt us as well,” he said

When asked whether it is still worth engaging in dialogue with Vladimir Putin, Šimečka said diplomacy always has a chance. But in the current situation, as Russian planes are bombing Ukraine and civilians are dying, he “can’t imagine a dialogue with the Russian president”.

What Europe can do

The European response in the form of sanctions and humanitarian aid to Ukraine is the bare minimum that the EU needs to do, and Šimečka called on member states to help Ukraine in terms of weapons and arms. Another crucial matter is the political signal that the EU and its institutions can send towards Ukraine and Russia.

“Right now, we can’t shut the doors of Ukraine’s accession to the EU. We can’t leave Ukraine behind, in the hands of Vladimir Putin. Ukraine is a democratic and sovereign state, which has a right to decide its own future,” Šimečka said.

Šimečka explained that European Parliament would hold a snap plenary session next Tuesday (1. of March) to prepare a resolution condemning Russian aggression and calling for severe sanctions.

In terms of defence, Šimečka stressed NATO’s unequivocal and irreplaceable role in Europe. However, Europe has to strengthen its defence capabilities and competence in this area in the long term.

“European security order is changing dramatically. We must respond, no matter how it all ends. In the long run, we can’t be dependent solely on NATO and the United States,” Šimečka continued.

The role of Slovakia and other countries bordering Ukraine will also be vital. “Slovakia must be ready. There is a realistic scenario that we will have borders with the Russian Federation and the Russian army behind it. I hope it does not come to this. The time that awaits will, however, be a new situation. We must invest in our security and be prepared,” he concluded.