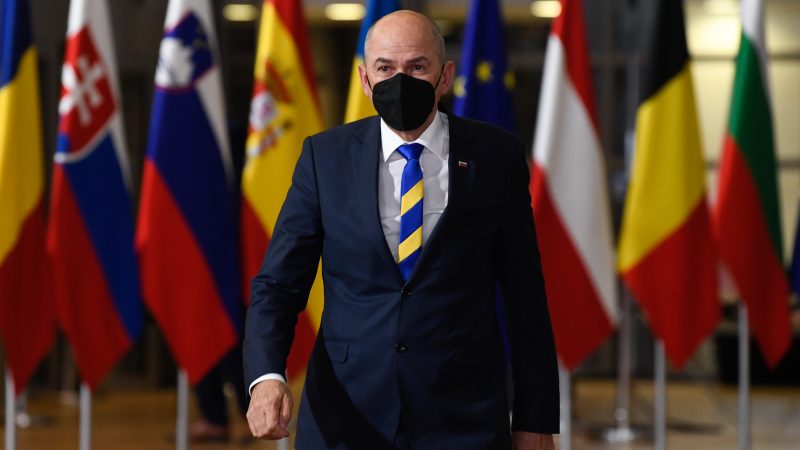 The donated rifles are Kalashnikovs that the Slovenian Armed Forces had used before receiving newer equipment and which have been set aside as a strategic reserve. [European Council]

The West must stop Russia’s President Vladimir Putin now because if Kyiv falls, it will have consequences for Europe’s whole East, Slovenia’s Prime Minister Janez Janša told EURACTIV in an exclusive interview.

“I am 100% convinced that if Russia is not stopped in Ukraine and Kyiv falls, then the next target is Moldova, Georgia, then troubles will be caused in the Western Balkans, then the Baltic States are the next target,” he said, echoing the words of the EU’s chief diplomat Josep Borrell.

Janša also warned of a ‘domino effect’ should Russia succeed with its invasion.

Slovenia’s prime minister said it is crucial that “Europe should learn something from its history”, referencing appeasement policy during World War II and the Yugoslav wars.

Comparing Russian President Vladimir Putin to nefarious figures from Europe’s recent history, he said, “there is no such formula to work with people thinking like Hitler or Stalin. We have to stop them at the beginning.”

He also explained that while there are some “bizarre similarities” between Putin and ex-Yugoslav leader Slobodan Milosevic, and Europe could expect “the same irrational moves when things are not going to plan,” Russia is not Yugoslavia and is a nuclear power.

Despite this, Janša was clear that it is essential to halt Russia in its tracks as soon as possible.

“It is costly, with the sanctions, the military aid, it is not without casualties – but the price at stopping him [Putin] now is a thousand times less than the price we would pay if we let him take Ukraine,” he said.

Asked whether those that have not joined sanctions (notably Serbia) and condemnation efforts will be judged by history, Janša said: “Everybody has to decide”.

“It’s something similar as to when Nazi Germany attacked Poland, and I don’t think we have should risk failing as the West failed at that moment,”

Earlier this week, Janša and his Polish counterpart Mateusz Morawiecki called on EU member states to take “quick and courageous decisions”, speaking out in favour of Ukraine joining the EU by 2030. Similar comments have been made by several Eastern European leaders and, most recently, the EU’s leadership.

The Slovenian prime minister said a half-an-hour discussion with Ukrainian President Volodymyr Zelenskiy “changed the mood favourably towards the European perspective of Ukraine, much more than thousands of meetings speaking about the same issue in the past”.

Zelenskiy had reportedly made a passionate plea to EU leaders for bloc membership on Thursday (28  February), telling them that “this might be the last time you see me alive.”

In what some have rated as the EU executive’s clearest commitments so far, European Commission chief Ursula von der Leyen stressed on Sunday (28 February) Ukraine belongs in the  EU, and the bloc wants the country to join.

“The moment to think about strategic changes that are on the table is now because the public opinion in Western Europe is changing,” Janša said.

“This has to be a strategic political answer of the EU to the current challenges. What was not possible one week ago is possible now,” he added.

With Kyiv’s growing ties to the West, a thorn in the side of Moscow, those remarks are likely to anger Putin, who has claimed a historical oneness between the Russian and Ukrainian peoples as one of his justifications for his unprovoked invasion of Ukraine.

“I am very glad that after sending this letter with Polish Prime Minister Morawiecki, we had quite a discussion in the European Council, and also some colleagues from the West joined into this,” Janša said.

But while Ukraine is not an official candidate for EU accession talks, calls for enlargement of the bloc have fallen on deaf ears in Brussels and across EU capitals.

“Those discussions about enlargement in the past decade were very out date: ‘They are not fulfilling the conditions’, ‘they’re not controlling their own territory’ and so on – this was the Russian narrative, this is why Russia started these frozen conflicts,” he said.

The US’ pre-emptive intelligence strikes and Russia’s staged TV moments were a part of the ‘battle of narratives’ since Russia decided to invade Ukraine.

Asked whether he believes whether public pressure is having an impact on Moscow’s actions, Janša said, “the Kremlin was not aware that everybody now can report, and that it’s not possible to fight with the same old Soviet-style propaganda.”

Comparing the situation to the Yugoslav wars, Janša said Western countries had not been prepared to address what eventually happened.

“But the media were prepared – and it’s the same in Ukraine now,” he said, adding: “Without the media attention, Ukraine would not have many chances.”

“When then people around the globe can see the suffering, consider the difference between those who are attacking and those who are defending themselves, the situation is changing,” he added.

The United Nations’ refugee agency (UNHCR) says it plans to deal with up to four million Ukrainian refugees if the situation worsens. Still, European Commissioner for Crisis Management Janez Lenarčič had said he estimates the figure could reach seven million.

“Slovenia is, of course, prepared to take its share; we had a similar situation after the Bosnian war,” Janša said when asked whether the country would commit to taking in Ukrainian refugees.

However, he stressed that those fleeing Ukraine “are not migrants, but refugees”, adding that the EU leaders had been “united in such an assessment” when discussing the matter last week.

Asked whether this would be the time to reopen the discussions about the EU’s stalled migration pact, Janša said the bloc should finish the debate that could not be completed in the past years.

“But it’s not possible to conclude the discussion on the difference between economic migrants and refugees, these are two different categories”, he added.