Situation ‘getting worse’ in Romania: 50,000 refugees in two days 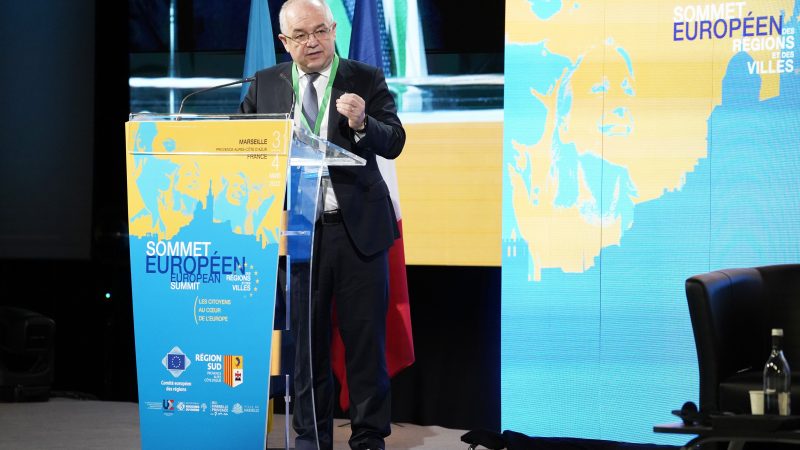 The refugee situation in the regions and cities bordering Ukraine is going to get worse, explains Emil Boc. [European Union / Fred Guerdin]

Emil Boc, the former prime minister of Romania, spoke with EURACTIV about the influx of Ukrainian refugees, the EU’s dependence on Russian gas and the EU’s unity on the sidelines of a summit of the regions and cities in Marseille.

Emil Boc is the mayor of Cluj-Napoca, president of the association of Romanian municipalities and the former prime minister of Romania.

Romania is at the very front lines of this Ukrainian refugee situation. Yesterday (2 March), you said there were 120,000 already in Romania. Has the situation changed as the situation in Ukraine gets worse?

But we expect the situation to worsen in the days to come, as the pressure on the regions not directly at the border is increasing. Now that the first regions around the border are complete, the other cities and regions that do not directly border Ukraine are getting involved. So it’s really a humanitarian crisis around, and there are a lot of problems in Ukraine, in Moldova.

At this very moment, we try to explain to everybody that this is not a sprint. It’s a marathon of support.

The Romanian People, the Polish people, the Hungarian, and Slovakian people have very strong solidarity with Ukraine. We are working excellently with civil society and the remaining actors.

Speaking of civil society, it took your government two or three days to formulate a proper response at the border, according to sources on the ground. Why did it take so long to react to this very fast developing situation?

I don’t know what stories you have heard, but the national authorities took all the decisions over there. Yet, many people who initially arrived in Romania didn’t want to be a refugee in the legal sense, but just to pass through the country to move to Western Europe. Like I said, out of 120,000 refugees until 3 March, 70,000 left Romania more or less immediately.

So the first wave was primarily refugees with cars, who moved on to a place in Western Europe. But the situation is getting worse now, as the people who had some money have already left Romania, or they’re still in quarters on their own money around the regions. Romanians were waiting for them with help, but they didn’t need it.

But the other people from Ukraine, the second group with fewer material resources coming from Ukraine now, there is solidarity with them.

That was the first week, but now the situation is getting worse, as I said, and things are becoming more dramatic in Ukraine and Moldova and the people who had some money to stay at hotels, they are running out and asking for support, which we are ready to give,

How much has this cost Romania so far, and how much do you expect it will cost?

It is not yet known how much this has a cost, but we are ready to offer as much as is needed. We have already applied for the European Mechanism for Refugees and Migration, so we will also get European money. But we do have money in our budget for emergencies to cover the present situation.

So the state did, from my point of view, the right legal decision to support the refugees, but you have to understand there are two kinds of refugees. There are people who do not want to have refugee status. They just want to leave the country and move on to France, Germany, the Netherlands, etc.

For these people, we provide them with transport, translation, and legal documents, which was our help, And for the others, they really need our support in terms of accommodation. That’s the situation right now.

So Romania has sufficient measures in place to deal with the situation?

We still have the situation under control. But we need international support to cope better because it is enormous humanitarian pressure.

As I said, 50,000 refugees crossed the border to Romania in just two days. Imagine Poland is four times bigger, so imagine the situation there.

But of course, I know the situation in Romania best, and I can imagine what will be important.

We need to collaborate, activate the European funds, and offer legal support to keep enthusiasm high. I think morale is more important now that Europe and the US are more united than ever.

As our democratic values, our Europe is at stake. We have a situation of great unity now.

The citizens that have come here to Marseille [where the summit of the regions and cities was held] from all over Europe are sympathising, helping, and showing their support and enthusiasm.

The time for reflection is over; it is now time for action. That’s my message. The time of reflection began after the annexation in Crimea in 2014. We have had enough.

If we do not take the proper measures now, our democracy will be in danger next time.

As the war in Ukraine becomes worse, where will Romania’s breaking point be?

We do not know yet. But we expect the situation to worsen, depending on how long the crisis in Ukraine will take. But as we had one million refugees in one week, there will be two million refugees in two weeks. Twenty to thirty percent of them might come to Romania.

So we’re preparing schools and education for them to study medical aid, legal translation, accommodation and food. That’s the next step, and last but not least, jobs. After 60 days of accommodations, we offer them jobs to decide and integrate into the Romanian and European markets.

A significant sticking point continues to be Europe’s dependence on Russian energy exports, particularly gas. What would you recommend?

I always said that Europe could not depend on Russian gas. We cannot be on the whims of dictatorship, which controls whether our prices are going up or down. An authoritarian regime like Russia cannot blackmail us.

So now, no matter the cost, we have to stop the Russian gas. There are alternatives. For example, in Romania, we import 20% of our gas from Russia. On the other hand, other countries are on a higher level of dependency.

But either way, as we have discussed here, we have to put a firm emphasis on alternative energy from renewable sources and another source of green energy, like nuclear energy. In my perspective, nuclear power is still green. It’s a good alternative.

We are preparing for worse in terms of gas, and we are ready to suffer now, short and painful, but to be safe. Postponing the issue will never be a solution.