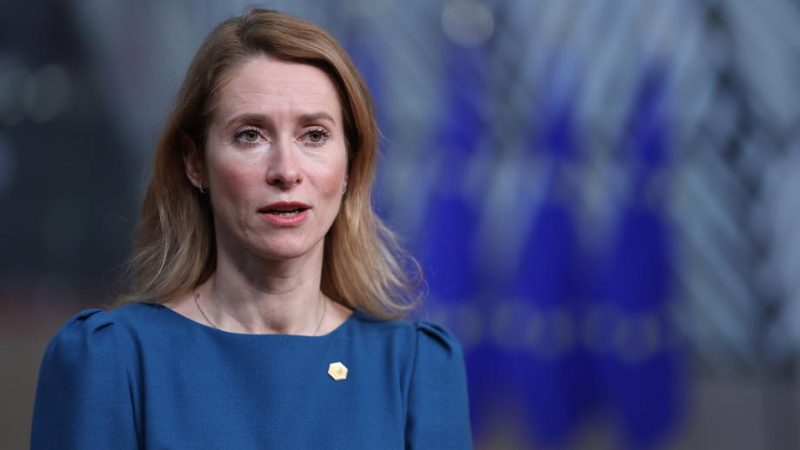 There is no point in talking to Vladimir Putin if we really want him to understand he is isolated, Estonia’s Prime Minister Kaja Kallas told EURACTIV in what can be seen as a thinly veiled criticism of largely unsuccessful phone diplomacy with Moscow.

“I feel that if everybody is constantly calling him, he doesn’t get the message that he’s isolated. So if we want to get the message through that actually ‘you are isolated’, don’t call him – there’s no point,” she repeated a message she had told an international audience at Lennart Meri Conference in Tallinn the same day.

“He feels that he’s the centre of attention because everybody wants to talk to him. But what do we get out of this? I don’t see any results, because after all these talks, Bucha happened, Irpin happened – we don’t see any signs of de-escalation,” she added.

French President Emmanuel Macron, who together with German Chancellor Olaf Scholz has been trying to negotiate a resolution to the conflict in Ukraine, said earlier this week that Russia and Ukraine would have to come to a negotiated truce and that peace efforts would not be served by Russia’s “humiliation”.

Asked if it would make sense to ‘keep diplomatic channels open’, Kallas told EURACTIV in an exclusive interview said she personally does not see “any point in talking to him”.

Over the past few months, France and Germany have faced increased criticism for being responsible for a failed Minsk peace process, which has sought to halt the war in Ukraine’s east that began when Russia-backed separatists seized swaths of territory following Russia’s 2014 annexation of the Crimean Peninsula.

But years on, there has been no full political settlement and Ukrainian officials have made the diplomatic efforts responsible for opening the door to Russia’s 24 February invasion.

Asked how to avoid a ‘Minsk III’-scenario, Kallas said that “peace cannot be the ultimate goal” of future peace negotiations after the war ends.

“We have made this mistake three times before in cases of Georgia, Donbas and Crimea, that we thought now we have a peace treaty, everybody stays where they are, and we go do a back to business as usual,” she said.

“Because those territories which are occupied, the atrocities will not stop if there will be peace,” she said, making a reference to Estonia’s experience after WWII.

Kallas said the narrative around peace talks would be also wrong, and should be up to Ukraine to decide what they are willing to put on the table.

“We ask: What could the West do to de-escalate? What could Ukraine de-escalate? I mean, they [the Ukrainians] haven’t done anything wrong, they defend their country that is under attack,” she added.

Asked whether she feels that in the aftermath of Russia’s invasion of Ukraine, believe inside Europe is shifting towards the East, Kallas said that “what has changed is that we [Eastern Europeans] are being more or less listened to, much more than we were before”.

“For those big European countries that have much better neighbours than we do, their main worry is migration, but they have to understand that if there is a weak peace, then the migration will continue because people will be afraid to live there,” she added.

Asked whether she believes that Putin can be held personally accountable for war crimes, Kallas said Europe should “do everything that to proceed and prosecute crimes”.

This would include not only those at the highest level, who has given the orders but those people who are actually committing the crimes on the ground.

“Why? Because aggression can’t pay off,” she said, adding that otherwise this “would give a clear sign to everybody that one can do this, but then it is a threat to international order.”

Asked about the current EU sanctions stalemate over the Hungarian veto and the punitive measures not having changed Putin’s behaviour so far, Kallas said “the EU is in this for the long-haul.”

Efforts to stop Putin’s war machine in Ukraine and to isolate Russia politically and militarily must continue, Kallas stressed.

“It is it was easier in the beginning because then it was clear that we put the sanctions that only hurt Russia,” she said, but acknowledged “we are in this phase where the sanctions also hurt us”.

“Gas might be expensive, but freedom is priceless,” Kallas said. “It’s very hard to explain to those countries and people who haven’t experienced losing their freedom.”

European Commission President Ursula von der Leyen has hinted she might support changes to EU treaties, should it be necessary to implement the recommendations of citizen panels from the Conference on the Future of Europe.

One in three member states, mostly from Northern, Eastern and Southeastern Europe, oppose launching a procedure to change the bloc’s treaties.

“In the middle of such instability like we have right now, it’s not the right time to open the treaty discussions,” Kallas said.

“The worry that we have, being a small member state, is always whether we are overrun in certain decisions,” she said

“But obviously, at the same time, we see also Hungary now blocking the big decisions like the Eu sanctions against Russia – it might be also in our interest that Europe functions more quickly,” Kallas added.

“We need to do more time to do our homework,” she added, seemingly leaving open whether for Estonia there would be room for consensus on the issue.

At the same time, France’s Macron addressed the European Parliament in Strasbourg earlier this month and pitched a proposal for a new “European Political Community”.

According to Macron, this would allow Ukraine and others currently outside of the EU framework to be more closely involved with the EU, seemingly proposing an alternative to enlargement.

Asked what she thinks of the French pitch, Kallas flatly said that Macron “will have some explaining to do before the idea can be discussed”.