Akif Çağatay Kılıç represents the ruling Justice and Development Party (AKP) and is the current Minister of Youth and Sports.

The EU needs Ankara to change its anti-terror laws if it is to grant visa liberalisation to its citizens. Will Turkey follow through on this?

We have to make it clear what we mean when we talk about anti-terror legislation. The PKK (Kurdistan Workers’ Party) is a terrorist organisation, it is classed as such by Germany and the EU. We are fighting a war on terror, so we have to stand together. It’s the EU that is going to have to move when it comes to defining the fight against terror.

When it comes to Daesh (the so-called Islamic State), anti-terrorism tops Europeans’ agendas, unlike the PKK. We all need to sit down together and agree on comparable standards on Daesh and PKK.

The EU has called for anti-terror legislation so that, among other things, unpopular journalists no longer face censure.

So an amendment will not be made to the anti-terror law?

It’s not on the agenda.

So, presumably, this means that there will not be visa liberalisation for Turkish citizens then.

We have done our homework. Visa liberalisation by October 2016 has been promised to us for a while now. We knew what was expected of us. But it is not fair to make additional conditions now.

They see things different in the European Parliament. Its President, Martin Schulz, said last week that it was explained from the beginning that Turkey would have to satisfy 72 criteria for visa liberalisation and that reforming the anti-terror law was one of them.

Mr Schulz should take a look out of his office window and ask: How is it that a terror group like the PKK can set up a tent in the middle of Brussels and spread propaganda, like they did in March?

We will wait and see whether visa liberalisation comes or not. Soon the German chancellor is going to be in Turkey and meet with President Erdoğan. I think that the refugee situation will certainly come up. Essentially, Turkey has fulfilled its humanitarian obligations to the refugees and we have received nearly 3 million.

These people want to return home. For five years, their homes have been destroyed by a tyrant and dictator. More than 400,000 people in Syria have been killed. Unfortunately, the world has looked the other way. But now we have to speak up. 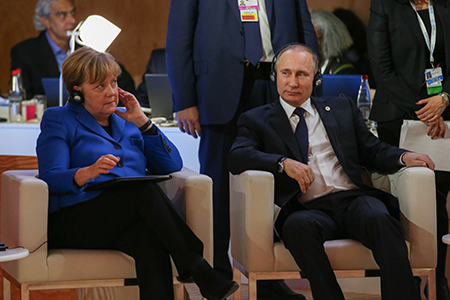 Germany steps up its flirting with Russia

No other country sends as many politicians or businessmen to Russia as Germany; not all of the visits are made public knowledge either. EURACTIV’s partner Der Tagesspiegel reports.

Is full Turkish membership of the EU really part of the debate going on in Ankara?

The EU and Turkey are equal partners. I believe that our European friends should ask themselves whether they have treated us fairly or not. Actually, the accession process should be further along, but talks have stalled because of political reasons forwarded by South Cyprus and France.

If the talks fail, then many Europeans fear that Turkey will fall into autocracy under President Erdoğan, given his plans for the presidential system.

The German parliament will vote on a resolution at the beginning of next month on the Armenian massacre and whether to recognise it as genocide. What are your thoughts on this?

How history should be judged should not lie in the hands of politicians. The so-called genocide is not a political, but a legal definition.

Turkey has long opposed the international recognition of the Armenian genocide and the German parliament’s plans to finally grant it could spell trouble for Berlin’s relations with Ankara. EURACTIV’s partner Der Tagesspiegel reports.

In the past, several parliaments have condemned the genocide, including the French National Assembly.

Germany has a special significance as it is home to nearly 3 million Turks. We hope that the mistake made in other parliaments will not be repeated in the Bundestag. It is up to Turkey and Armenia to deal with our shared history together. We have set up a joint committee that will work on the documents that are in the archives of both our countries. But a response from the Armenian side is still not forthcoming.