In a wide-ranging interview, the Ukrainian ambassador to the EU, Mykola Tochytskyi discussed the issues on the Ukraine-EU agenda ahead of a summit in Kyiv on 8 July.

Before taking his present post in Brussels in 2016, Mykola Tochytskyi, a career diplomat, was permanent representative of Ukraine to the Council of Europe (2010-2016), and head of the general service on international cooperation under the president of Ukraine.

What’s new on the Ukraine-EU agenda, especially since yours country has new President?

First of all, we are very happy that the first visit of our new elected President was to the European institutions, which is also a demonstration that the course doesn’t change, that it was confirmed during his visits to EU and NATO headquarters, where he reconfirmed that the Euro-Atlantic integration is the goal for Ukraine which we will follow.  Second, we have from the EU side, I mean from the 28 members, a reconfirmation of policy of non-recognition [of the annexation of Crimea], the roll-over of Crimean and sectoral sanctions against Russia, and the essential is the policy of EU to help with regional reconstruction in Donbas.

What I mean: after the Azov See – Kerch strait incidents, and the Russian aggression in Black Sea, the EU sent a fact-finding mission to Donbas, to Mariupol, and they developed new package of help to Ukraine in Mariupol, and they whole region till Zaporizhia, and we will have a presentation of such package of reform in this region during the summit [the EU-Ukraine summit in Kyiv on 8 July].

What I mean: first of all, infrastructure projects for the railway between Mariupol and Zaporizhia, a new EU office in Mariupol on the issue of decentralisation and anti-corruption. Also, some projects for Berdiansk and other cities on the Azov Sea on business development, etc. Two essential issues to be highlighted during the summit are, first, the reply from the EU on our demand to adapt to the new reality annex 27 to the Association Agreement on energy issues, which should lead to the full integration of energy markets of the EU and Ukraine. The EU replied positively, the new annex with amendment was ratified by Verchovna Rada, and we sent it to EU, the next step being for the EU to provide to us with a road map of what is needed to do to join the EU energy market in the future.

Second, we have a first reply on our other initiative on the digital economy, we just received yesterday [2 July] the first signal from EU, that Ukraine can also, after a few assessments, join the digital market of EU, and the first step is that EU say that it’s possible. Now we will have in July a mission from the EU where they will study our legislation in the digital field,  and let’s hope that in the next few months we will discuss joining the digital  market of EU.

I am familiar with your country’s ambition to join the EU main policy areas: Customs Union, Energy Union, Single Digital Market, Schengen, which you tabled during the Bulgarian Presidency. So you keep following this path…

Exactly, nothing has changed on our mind to go to that direction, because we consider it is essential to join the EU market, even if we are not member, we are still partner and want to join. First step, when the previous government proposed to EU to have such road map and such strategy, the first reaction, I remember very well, because I was asked to go to the European Commission, and there was a very tough discussion, and some high ranked people told me it will be never. It was exactly one year ago. But now we have positive reply and already a decision on annex 27 on energy, we have a first reaction on digital, this is annex 17/3, and in a few months we will have positive steps in this direction. The next, the biggest issue for Ukraine, is the question of our cooperation in justice and internal affairs,  and especially the customs reform from our side, and the necessity to have a common supervision of our borders, which is the biggest problem, because not much was archived in the previous few years, but we hope that EU will join our proposal to move ahead, and we will discuss what kind of texts we need to adopt in the future.  Of course, we are very happy to discuss with our colleagues the issue of future security dimension, like PESCO, where we can also propose our achievements, and we have already an MOU with the European defence agency in four fields, where we have some success in training our people, exchanging the information, participating in different exercises, etc. I hope that in a few months, and during this summit, and after that in a few months, we will have larger proposals from EU.

Maybe one aspect is Ukrainian experience in countering hybrid threats from Russia?

Absolutely. We have contacts on this, with EAST-STRATCOM, with people from the office of Commissioner Gabriel, etc., and the first reaction was positive. Although we are not a member, the EU considered that such contacts are important, and we are ready to share our experience, because we were the first to suffer from such bad experience, and in any case it’s something we can cooperate with EU. I can tell you that we were resilient during the last Presidential elections, we were able to protect enough our systems from external intervention. The issue of fake news is also of interest for both of us. And we hope that it would be strong signal from EU side on the Hamburg tribunal decision on our three boats and 24 sailors arrested by Russian federation, and of course we would like to ask our friends to push on Russia on cooperation on MH17, because we have already results, and we think that it’s time for Russian federation to recognize they involved in such the issues, stop develop the stories that it was Ukrainian… It is also good time to look, because in 2021 we have the right to amend our association agreement and DCFTA.

Yes, I remember the arguments by yours official representatives about the need to update the association agreement and DCFTA… 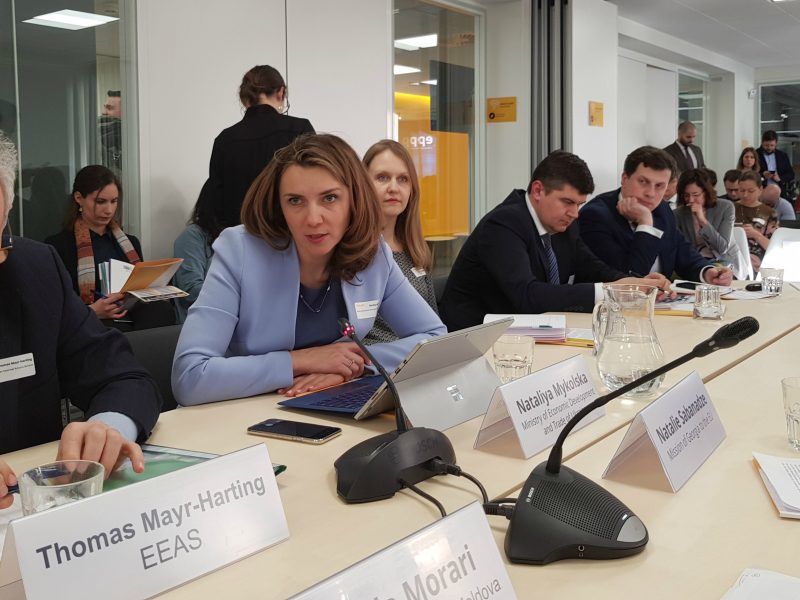 In reality it is good time for all of us, EU and Ukraine, to look closely to the agreement, to assess, and to propose already during the next a few months to the European Commission  what we would like to update.

Do you want to do it with this Commission?

No, of course, we will do it with the new Commission, but during the summit it will be necessary to send the messages, the Commissioners, the old one will propose some kind of political letters what to do with partner country like Ukraine, and I think it will be right to ask Mogherini or Hahn, or Juncker not to forget Ukraine on his letter to his successor, and this is something we would like to discuss.

In the new European Parliament there are several pro-Russia forces. Even Silvio Berlusconi, who is EPP, wants to bring Russia close to the EU, and wants to lift the EU sanctions. How do you interpret this?

During the last five years the European Parliament was a strong supporter of Ukraine’s independence, sovereignty. As an example, the Azov conflict was immediately discussed in the EP. Of course we realise the difference in composition of the new European Parliament. But according to our preliminary estimates, there is still a majority of supporters to Ukraine. Unfortunately Dariusz Rosati (EPP, Poland, member of the Delegation to the EU-Ukraine Parliamentary Association Committee) was not re-elected, but we have other friendly MEPs from central European countries, from the Baltic countries, not only from EPP, but also from the conservatives (ECR) which are likely to constitute a good team to support Ukraine.

And the process also depends on how pro-active is Ukraine.  At the end, the success of Ukraine is also the success of the EU. If we continue reforming our economy, our army, if we are successful in joining the different policies of the EU, I think it will be difficult to forget about Ukraine in the EU agenda. At the moment we have 41% of our trade with the EU. And we have a proposal of the EU to join ACCA [the agreement on conformity assessment and acceptance for industrial goods]. We are happy that our trade is not only in agricultural goods, it’s also industrial, services, IT etc.

Would you prefer institutionally that in the next Commission there would be a Commissioner dealing with the Eastern Partnership, instead of having as now Commissioner Hahn responsible also with EU enlargement and the Southern neighbourhood?

In your question there is already a reply. Of course, it was a very large portfolio for Commissioner Hahn. Of course, we would like a Commissioner dealing only with the East. Having said this, I cannot say that Commissioner Hahn wasn’t dedicated to Ukrainian issues. The special Support Group for Ukraine (SGUA) led by Peter Wagner, under Commissioner Hahn, continues to be very useful. But we will need more support, more focused, and maybe a Commissioner from our region, who knows better what kind of reforms we need, what kind of problems we have, coming from the ex-Soviet space. So a candidate from the Central and Eastern part of Europe would be welcomed by us. But this is for the Commission President to decide.

We were very happy having Vice President Dombrovskis dealing with the financial and macro-economic issues, and we would like a similarly qualified person as Dombrovskis to deal with Ukraine. He not only had a positive attitude, but he was very good in explaining, while being tough. Which is also a demonstration of his genuine will to help. Yes, we would like to have a Commissioner more oriented to the three of us which clearly said we want to join one day the EU: Ukraine, Georgia and Moldova.