Ukrainian analyst: The EU cares less about values than the USA 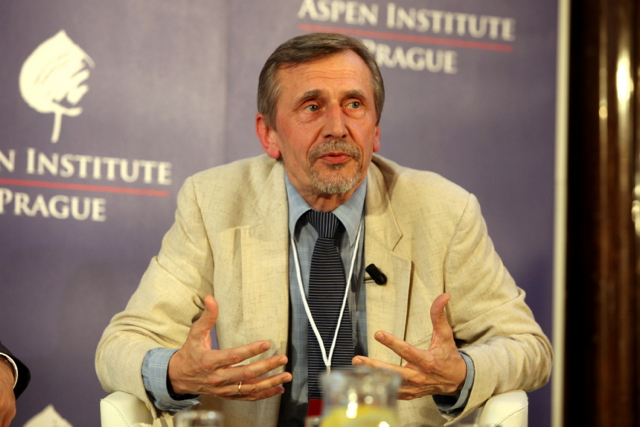 The United States is a country much more committed to values of human rights, of liberty and democracy than the EU, which is more pragmatic or even cynical in this regard, Ukrainian political analyst and journalist Mykola Riabchuk told EURACTIV Slovakia in an interview.

Mykola Riabchuk is a senior research fellow at the Ukrainian Center for Cultural Studies, in Kyiv, and co-founder and member of the editorial board of Krytyka, a leading Ukrainian intellectual magazine. He spoke to EURACTIV Slovakia’s Jakub Šimkovi?. The interview was made at the Aspen Annual Conference 2014, in Prague.

Do you see any shift in relations between Ukraine and Russia after recent presidential elections?

I feel that Russia is in a difficult position because it created a situation, and it would be difficult to find a way out. Russia’s propaganda created a false image of coup d’état and a fascist government in Kiev. Now they have to find a way to explain propagandistic lies.

On the other hand, they have to do something, because their plans for mass rebellion in Ukraine had failed.

They managed to create some unrest in Donbas, because of the mercenaries and heavy weapons sent there. But it’s still not a national rebellion. It is not a civil war, as they expected.

I believe this was their master plan. Suddenly they discovered that Ukrainians, despite their propaganda, do not dream about joining Russia.

The majority of people, even in Donbas, are not going to join Russia. So it is a big disappointment for Putin.

The Russian leadership was poisoned by its own propaganda, which is typical of closed societies, where they neutralize alternatives. They’ve begun to believe in what they say.

I predict that they would be looking for some diplomatic solution, but at the same time the Russians will try to force Ukraine to make some significant concessions.

Putin’s main idea is to force the Ukrainian government do federalise the country, to create some sort of loose federation like Bosnia, which is a failed state.

It is a Russian dream to make Ukraine a failed state; a country, which can only live like Bosnia under international supervision. In case of Ukraine, it would be definitely require Russian supervision and, of course, this is unacceptable for Ukraine.

So I feel that some sort of compromise can be found under international mediation.

What the government can offer is a removal of Russian mercenaries from Ukraine. They are ready to let them go, to create sort of corridor and move them away, to give amnesty to all other people, who are not involved in fighting.

Are these points a part of a plan that President Petro Poroshenko was talking about on 11 June, when he announced that Ukraine would be ready to hold talks with opponents in eastern Ukraine if pro-Russian insurgents there agreed to lay down their weapons?

Such a plan has not materialised. It is difficult to comment on something that’s not clear.

But what is clear to me is that Ukrainian government couldn’t negotiate with the terrorists, because they do not represent Ukrainian citizens as such. It would be stupid to negotiate with people who came from Russia with Kalashnikovs and pretend to represent the people of Donbas.

Let them move on and carry out normal elections in Donbas under international supervision, and negotiate with people who are elected by the people of Donbas, Donetsk, Luhansk and so on.

I believe it is a legitimate and reasonable solution. The government is ready to decentralise powers. It’s really a very good idea.

So there would be a constitutional change in this way?

No, I don’t think it should be a constitutional change. It takes an administrative reform, which, for example, occurred in Poland at the end of 1990s, and was very efficient.

It is true that all communist states were hypercentralised. It was typical for the communist system. Ukraine never adopted a decentralised system, even though the Orange government intended do so, but failed.

And it does not necessarily involve a constitutional change. It’s just a matter of giving more powers to regions.

The change of constitution is a complicated process. It requires 3/4 of the vote, and it cannot be passed within six months.

I believe that it would be done and that most people in the Ukrainian regions would be satisfied, not only in Donbas, but everywhere. Everybody suffers from this hypercentralisation.

And maybe as long as the Russian government completely controls the mass media, they can sell any story to the people. They can easily persuade Russian TV viewers, that they have won the war. We’ve forced them to decentralise.

So I hope that some compromise would be found. This war doesn’t lead Russia to victory.

Poroshenko is not a newcomer in politics. Is he a more acceptable political figure for Kremlin?

Frankly speaking, I don’t believe that any figure in Ukraine would be really acceptable for them, not only in Ukraine, but in all of these neighbouring countries. The Kremlin does not need good relations with these countries. They need full obedience.

So the only good leader for Putin might be somebody like [Ramzan] Kadyrov in Chechnya, who is absolutely subservient. All the others are not good enough. Even [Alexander] Lukashenko in Belarus is not good enough.

Russians will never be satisfied until they completely control the region and its politics. But this will never happen in the case of Ukraine.  We have developed our relations as it was possible, but do not expect too much.

So Ukraine has no illusions?

Of course Russia would be looking for some opportunity to provoke. We should be prepared. But on the other hand, it was a very good experience because now everybody in Ukraine understands, and it was emphasized by the president in his inaugural speech, that we need a good army. The best way to maintain peace is to be prepared for war.

Should the United States be more involved in helping Ukraine? This might be viewed as another case of provocation by Russians…

I think this depends on Russia’s behaviour. Of course any training is welcome. It’s a Ukrainian internal affair and not Russia’s problem. As to the arms, NATO countries are not going to sell any.

If Russia decides to escalate aggression, I cannot exclude such development and even NATO countries can´t exclude that. Actually Rasmussen said that they can consider such an option, but it largely depends on how Russia is going to move. So far, as I see it from the media, it’s not an issue.

It seems lately that the weight of the European Union in this crisis is slightly decreasing. As if the whole situation is narrowing down to the rivalry between USA and Russia…

There is a significant difference between the United States and the European Union. The United States is a country, which I believe is much more committed to declared values of human rights, of liberty and democracy than the EU.

The EU is much more pragmatic, or I would say cynical in this regard. It prefers to care more about interests than about values. The second problem is that the EU cannot operate as one entity, as the Americans can do. There are many members who are trying to submerge the unified policy.

We know the story of Gerhard Schröder, who was corrupted by Russians. But I can easily imagine that there are many small “Schröders” are everywhere in each country, silently lobbing on behalf of Russian interests.

It is much more difficult to achieve some unanimity here. On the other hand, I am absolutely 100 % sure that the European Union should unify more.

Integration is needed in at least three areas: security politics, international politics and energy. I believe that the European Union would greatly benefit if it would operate as one entity.

Russia uses energy as weapons; you simply cannot appeal to the free market. In my mind, the main obstacle are the corporate interests of the people like Schröder, to sabotage it.

0 responses to “Ukrainian analyst: The EU cares less about values than the USA”