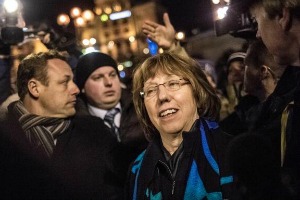 As protestors in Kyiv continue to defy police, EU’s foreign affairs chief Catherine Ashton clearly said yesterday (11 December) that the people of Ukraine deserve better than their current situation, while an US envoy spoke for the first time of possible sanctions against Yanukovich’s regime.

At the end of a two-day visit to Kyiv during which she met twice with President Viktor Yanukovich, Ashton pleaded for dialogue between the ruling party and the opposition, clearly indicating that the EU had abandoned its neutral position.

“More than anything, the message that I've been giving over these last days has been the importance of dialogue and the importance of listening to what people are saying. I think the people of this great country deserve better,” Ashton said.

The EU foreign affairs chief was shocked by the crackdown by anti-riot forces took of Maidan, the central square of Kyiv where protestors had been voicing pro-European sentiment since Yanukovich made a geopolitical U-turn towards Russia (see background).

The crackdown took place on Tuesday night, only hours after Ashton had visited Maidan, where she was reportedly received “as a rock star” according to eyewitnesses who posted reactions on Twitter.

Ashton met with Yanukovich for a second time yesterday, while protestors stood their ground and returned to Maidan, defying the power and the special forces.

After his meetings with Ashton and US Assistant Secretary of State Victoria Nuland, Yanukovich asked his opponents to meet him to negotiate a way out of the impasse.

"I invite representatives of all political parties, priests, representatives of civil society to national talks," he said in a statement that also called on the opposition not to "go down the road of confrontation and ultimatums".

Ashton called for greater inclusiveness in Ukrainian decision-making in her final statement before she left Kyiv.

The EU maintains its position that the door remains open for Ukraine to sign the Association Agreement, but only on the condition that the opposition is included in the talks, that arrested protesters are released and that the acts of violence are investigated.

TV footage showing Nuland's meeting with Yanukovich indicated that her tone may have been icier.

Brussels could soon adopt a similar tone if Yanukovich does not deliver on his promise to free detainees, investigate police violence and engage in a meaningful dialogue to find a way out of the political crisis.

Jen Psaki, a spokesperson for the State Department said the US was weighing all possible options, including sanctions.

“Sanctions are included but I am not going to outline specifics," Psaki said.

Reportedly, Yanukovich and his family possess a huge fortune, and Western countries knew precisely how to affect his personal interest through targeted sanction.

According to political experts from the Gorshenin Institute in Kyiv, there is a confrontation going on between a “party of peace” and a “party of war” inside Ukraine.

The political analysts painted a gloomy scenario under which the “party of war” wins the internal struggle for power and cracks down on fundamental freedoms, leading to the “Belarusisation” of Ukraine.

Such reforms would include the introduction of an emergency state, the forced dispersal of protesters in Kyiv’s Maidan square and elsewhere, the restriction of civil freedoms, the introduction of repression on the opposition, the prevention of Ukraine from EU integration and, possibly, a substantial transformation or cancellation of the presidential election in 2015.

On the other side, the “party of peace” within the current government is interested in achieving a compromise with the protesters, which implies changing key government figures such as interior minister, relaunching negotiations with the EU and getting the IMF loan. The representatives of the “party of peace” are also in favour of the election in 2015.

In addition, the Gorshenin Institute experts stress that there are similar polarised attitudes among the opposition and the protesters.

At the same time, it gave a new impulse to mobilise society and the protest. The implementation of the forced development has not succeeded. Now, the balance could tilt on the opposite side, which could hopefully boost the positions of the “party of peace”, the experts say.

The sources also said it was impossible to predict which party would gain the upper hand and control of the country, and that the current was likely to lead to exhaustion on both sides. In such a confrontation, the party will win that has its base better protected, the Gorsehnin experts said.