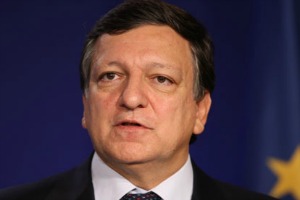 Concerned about the alarming, violent crackdown on the pro-European protests in Kyiv, Commission President José Manuel Barroso said today (22 January) said the EU would consider possible “actions," which diplomats explained was an euphemism for sanctions.

As development in Kyiv increasingly look like the beginning of a civil war, Barroso issued a stern warning to Ukraine’s authorities, departing from earlier statements which used to say that the EU door for Ukraine to sign an Association Agreement remained open.

At least two people have died since last night from gunshot wounds, according to a statement by Ukraine's general prosecutor.

Fifty people were detained overnight and 29 of them were officially charged with taking part in mass unrest, police said. A total of 167 police have been injured. There was no immediate number of injured civilians.

Barroso appeared in front of the Brussels press, saying that he was “shocked” to hear the latest news from Ukraine about death of protestors.

“We deplore in the strongest possible terms the use of force and violence and call on all sides to refrain from it and start taking steps to help deescalate the situation,” he said.

Barroso added that the overall environment in Ukraine had been worsening for some time and stressed the responsibility of the Ukrainian authorities to stop the escalation of the crisis and to engage in genuine dialogue with the opposition and civil society, with the aim of overcoming it.

He also said that the EU was following with great concern the recent restriction on fundamental freedoms, including freedom of expression and freedom of the media.

“We are generally concerned about these developments in Ukraine and will continue to follow them closely, as well as assessing possible actions by the EU and consequences for our relations with that country.”

Diplomats told EURACTIV that although Barroso did not use the term 'sanctions', the EU and the United States had agreed that immediate sanctions should be introduced against Yanukovich and leading oligarchs, in the case of a crackdown on the protests on Maidan square [more].

Washington imposed today sanctions against a number of Ukrainian citizens.

"In response to actions taken against protestors on the Maidan in November and December of last year, the US Embassy has revoked the visas of several Ukrainians who were linked to the violence," the US embassy in Ukraine said in a statement posted on its website.

However, the embassy said that "because visa records are confidential under U.S. law, we cannot comment on individual cases".

Any EU sanctions on Ukraine may take a while to come as the bloc's decision-making process for such actions takes some time.

Following the news that Yanukovich failed to sign the AA at the Vilnius summit on 28-29 November, hundreds of thousands of Ukrainians took to the streets, demanding his resignation [read more]. The protests, called EuroMaidan, have lasted ever since.