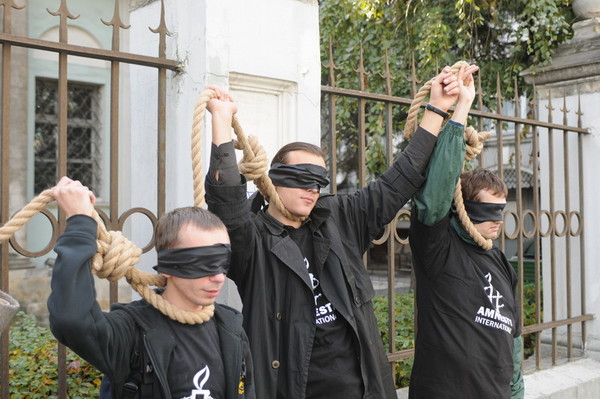 Belarus, recent host of the Minsk Ceasefire summit, was the only country in Europe and Central Asia to execute prisoners last year. But, after reintroducing capital punishment in territory they hold, pro-Russian Ukrainian rebels have sentenced at least one man to death since September 2014.

Belarus executed three people by shooting in 2014 after a 24 month break in state killings, Amnesty International told EURACTIV. It is the only European and Central Asian country which uses the death penalty.

The executions were secret with lawyers and family only being told after the prisoners were dead, Amnesty, which today (1 April) published its annual Death Penalty Report, said.

Ukraine abolished the death penalty in 2000. In August last year, pro-Russian rebels in the so-called Donetsk People Republic, in eastern Ukraine, introduced a criminal code in August, reserving the death penalty for the “gravest crimes”. The same session approved the setting up of military “courts” in the territories they control.

The Luhansk People’s Republic has also re-introduced the death penalty. On 26 September, rules were introduced that homosexual rape could be punished by death.

In October, a YouTube video surfaced which appeared to show a “people’s court” of about 300, judging two alleged rapists of women. After gunpoint confessions and a vote by the kangaroo court, one was sent to the frontline.

The other was sentenced to death by firing squad, with only his mother speaking out for mercy. Amnesty International have not been able to confirm if he was shot, but the sentence did not appear to be carried out immediately.

While there have been numerous reports of summary executions in Ukraine, they were not committed within the pseudo-legal framework of the criminal code.

The European Union does not recognise either the Luhansk or Donetsk republics, branding November elections held in the territories “illegal and illegitimate”. It has called for the rule of law and order to be reestablished, so that human rights violations can be prevented and investigated.

“Capital punishment cannot be justified under any circumstances. The death penalty is a cruel and inhuman punishment, which fails to act as a deterrent and represents an unacceptable denial of human dignity and integrity,” an EU official said.

Every EU member state has abolished the death penalty in law or practice. The last country to do so was Latvia, which banned capital punishment in wartime in 2012. The absolute ban on the death penalty is enshrined in the Charter of Fundamental Rights of the European Union.

Lukashenko, described as leading “Europe’s last dictatorship”, was able to play the international statesman at Minsk, shoring up his position at home, campaigners told EURACTIV.

?But there was little choice in the location for the summit if EU leaders wanted to stop the fighting. The EU can leverage hardly any influence over the police state, which is heavily backed by Russia.

A lack of interest from the west, hastened by the Ukraine crisis, have also ruled out any Maiden-style revolution in Belarus, according to analysis by Belarus Digest, published in The Guardian. Lukashenko has been in power since 1994.

The EU has urged Belarus to join a global moratorium on the death penalty as a step towards its universal abolition. Despite repeated EU condemnations, Belarus continues to execute by shooting, and to sentence prisoners to death.

In April 2014 Belarus secretly executed Pavel Selyun, sentenced in June 2013 for a 2012 double murder. The UN Human Rights Committee had requested a stay in execution, which was ignored.

Such requests are legally binding on state parties to the First Optional Protocol to the International Covenant on Civil and Political Rights, which Belarus agreed to in 1992.

In May, the Mogilev Regional Court in Belarus confirmed that Rygor Yuzepchuk had been executed. He was sentenced to death in 2013 for a 2012 murder. The authorities have not made public the date of his execution or the location of his grave.

Alyaksandr Haryunou was executed in October. He was sentenced to death in 2013 for a murder committed in 2012. Haryunou appealed to the UN Human Rights Committee in April, arguing that his trial had been unfair.

The Committee asked the Belarusian authorities to stay his execution until it had considered the case. They ignored the legally binding request. Neither his relatives nor lawyer were given the chance to have a final meeting with Haryunou.

In March 2015, Siarhei Ivanou was sentenced to death by the Homyel Regional Court of the Republic of Belarus. The EU’s foreign policy bureau called for his right to appeal to be guaranteed, while expressing sympathy to the family of the victim.

Worldwide, there was a sharp spike in the handing down of death sentences in 2014, up more than 500 on the previous year to at least 2,466. This was due to more governments in countries such as Saudi Arabia, Egypt and Pakistan using sentences handed down on trumped up terror charges to quell dissent, Amnesty International said.

Writing exclusively in EURACTIV today, it warned that “mainstreaming counter-terrorism” into EU foreign policy in the guise of “international cooperation” could undermine its principled stance on the death penalty.

“In the wake of the sharp spike in death sentences, and closer security cooperation with many state perpetrators, the burning question the EU needs to answer is whether and how it is making sure partners stop using the death penalty,” she said.

>>Read: Principles in the firing line? The EU and the death penalty

Russia and the Council of Europe

Ironically, Belarus’ sponsors Russia has had a moratorium on the death penalty since 2009. All 47 member states of the Council of Europe, including Russia, have stopped using capital punishment due to commitments under the European Convention on Human Rights.

Becoming a member of the international organisation for cooperation, human rights and rule of law, would mean Belarus would have to give up the death penalty. It would also be open to legal challenges over its dismal human rights record.

Council spokesman Andrew Cutting stated, “The Council of Europe is firmly opposed to the death penalty in all circumstances. The Committee of Ministers has repeatedly called upon non-member countries including Belarus, the United States and Japan to cease using the death penalty and move towards abolition.”

Japan (three executions last year) and the United States have observer status at the Council. Executions in the US dropped from 39 in 2013 to 35 in 2014, Amnesty International said.

China again carried out more executions than the rest of the world put together. Amnesty International believes thousands are executed and sentenced to death there every year, but with numbers kept a state secret the true figure is impossible to determine.

Without China, there were 602 executions in 22 countries in 2014. The world’s top five executioners apart from China in 2014 were Iran (289 officially announced and at least 454 more that were not acknowledged by the authorities), Saudi Arabia (at least 90), Iraq (at least 61) and the USA.

Every EU member state has abolished the death penalty in law or practice. The last country to do so was Latvia, which banned capital punishment in war time in 2012. The absolute ban on the death penalty is enshrined in the Charter of Fundamental Rights of the European Union.

Amnesty International publish an annual report on the use of the death penalty worldwide.