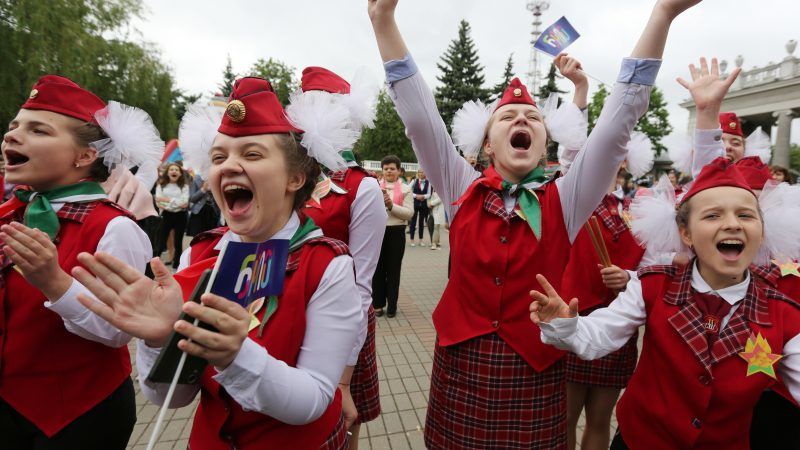 Members of the Belarussian Pioneers Youth Organisation shout during a pioneer festival 'Look at us in a new way' in Minsk, Belarus,19 May 2018. [EPA-EFE/TATYANA ZENKOVICH]

Belarus on Tuesday (22 May) appointed its first ambassador to Sweden for almost six years, resolving a bitter diplomatic spat over a pro-democracy stunt involving teddy bears.

The move ended hostile relations dating back to July 2012 when a group of Swedish activists parachuted teddy bears carrying pro-democracy messages into the ex-Soviet country.

Belarussian President Alexander Lukashenko has sacked his foreign minister following after a diplomatic row with Sweden and the European Union over a pro-democracy stunt in which hundreds of teddy bears were airdropped over the country.

Mironchik told Belarusian state television that “now we can say the Ice Age in relations between Belarus and Sweden has officially ended”.

Lukashenko was furious after activists managed to fly a small plane into Belarusian air space from Lithuania and drop some 800 toys, attached to little parachutes and holding signs calling for freedom of speech and human rights.

The Belarusian strongman, who has been in power since 1994, reacted by expelling Swedish diplomats and recalling Belarusian diplomats, although Belarus and Sweden never severed diplomatic ties.

Lukashenko also fired the foreign minister, the country’s top border control official and the air force commander. A border guard was jailed for failing to report the plane.

The European Union in 2016 lifted sanctions against Belarus for an improved human rights record, including the release of political prisoners.

Sweden in 2015 appointed an ambassador to Belarus.

The Belarusian move comes as the Swedish government on Monday presented a pamphlet on what households should do to prepare for possible war amid soaring tensions with Russia.

Belarus: Tensions with Sweden but no break with EU

Tensions between Belarus and the European Union are not new and follow a trend of increasing Belarussian alienation from the West. Although the dispute between Belarus and Sweden is the first these countries have had at such a high level, tensions are unlikely to grow since the West does not want to further isolate Belarus, argues Stratfor.