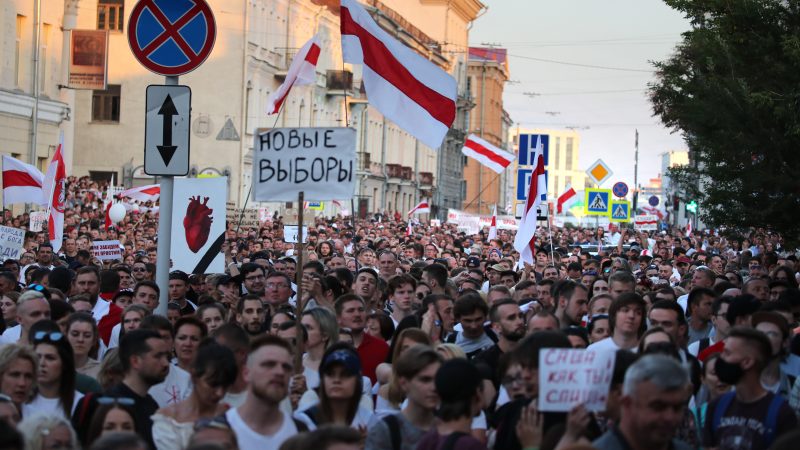 Several thousand protesters gathered at Independence Square in central Minsk, waving the red-and-white flag of the opposition, chanting “Leave” and calling on the ex-Soviet country’s authoritarian leader to resign.

Demonstrators also marched to detention centres demanding the release of opposition leaders and protesters arrested during rallies against the results of a presidential election on August 9 that Lukashenko claims to have won with 80 percent of the vote.

Employees at several factories and state television earlier walked off the job after the biggest opposition rallies in Lukashenko’s 26 years in power on Sunday.

More than 100,000 people took part in a “March for Freedom” following calls for continued demonstrations from Svetlana Tikhanovskaya, a political novice who stood against Lukashenko on August 9 and claims she won the election.

While European Union leaders are to hold an emergency video summit on Belarus on Wednesday, President Donald Trump said the United States was following events “very closely”, describing it as a “terrible situation”.

However, Russia, the most powerful ally of Lukashenko, has said it is ready to step in if necessary.

‘Fighting their own people’

A police crackdown that has seen thousands arrested and widespread allegations of brutality appears to have turned even Lukashenko’s support base at state-owned industries against him.

In footage widely shared on social media, workers at the Minsk Wheel Tractor Plant (MZKT) interrupted Lukashenko with shouts of “Leave!” as he tried to give a speech on Monday.

An angry Lukashenko, who had earlier told the workers he would not give in to calls for new elections, walked off the stage, saying: “Thank you, I have said everything. You can shout ‘Leave’.”

In a video recording of the speech, Lukashenko can be heard saying: “Until you kill me, there will be no elections.”

Yet later he suggested that he may be willing to hand over power following a referendum on the constitution.

“You should get it approved in a referendum and then, using that new constitution, if you want, hold both parliamentary or presidential elections,” he said.

The Organization for Security and Co-operation in Europe (OSCE) on Monday voiced its “concerns about the conduct” of the Belarus election… and the disproportionate use of force against peaceful protesters, widespread detentions and alleged torture and mistreatment by the security forces”.

The OSCE said in a statement it made “a formal offer” to the Belarus government to facilitate dialogue between both sides.

“An open and constructive dialogue is needed to find a way forward in Belarus,” the statement said.

“A formal offer has therefore been submitted to the government of Belarus for a visit by the OSCE Chairperson-in-Office” Albanian Prime Minister Edi Rama “to meet with the government and representatives of the opposition,” the group added.

In his statement, he also called “for a thorough investigation to be conducted through” the OSCE.

Meanwhile demonstrators also gathered outside the Minsk headquarters of state television, where local media reported that 600 people joined the strike.

Maria Kolesnikova, a senior opposition leader, joined the protesters, saying: “I know how scared you are, because we are all scared. Thank you for overcoming your fear and joining the majority.”

Potash, used to make fertiliser, is a major source of income for Belarus, which is one of the largest producers in the world.

Lukashenko has defied calls to stand down after the election that saw him imprison his closest rivals, shun independent observers and unleash a brutal crackdown on peaceful protesters.

The opposition called for a general strike after hundreds of workers at state-run factories first downed tools last week.

In a video posted online on Monday, Tikhanovskaya — now in exile in Lithuania — said that although she never planned to enter politics she was prepared to temporarily take over the leadership.

“Fate decreed that I’d find myself on the frontline of a confrontation against arbitrary rule and injustice,” said Tikhanovskaya, a 37-year-old political novice who ran for president only after other potential candidates including her husband were jailed.

“I am ready to take responsibility and act as a national leader during this period.”

Tikhanovskaya, who says she will organise new elections if Lukashenko steps down, has demanded the release of all detainees and criminal cases be opened against those who ordered the crackdown.

More than 6,700 people arrested, hundreds wounded and two people have died in the crackdown.

Detainees have gradually been released, many emerging with horrific accounts of beatings and torture.