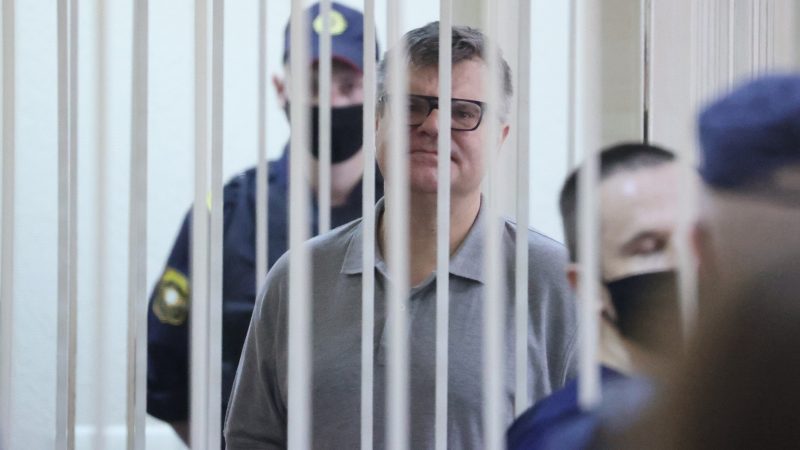 A handout photo made available by Belta shows former chairman of Belgazprombank, Viktor Babariko in the defendant's cage prior the proclamation of his sentence at a court in Minsk, Belarus, 6 July 2021. [Handout photo/EPA/EFE]

A court in Belarus jailed former presidential contender Viktor Babariko for 14 years on Tuesday (6 July) after convicting him on corruption charges he denied, sparking condemnation from the West and the embattled opposition-in-exile.

In power since 1994, Lukashenko claimed a landslide election victory and a new term as president, sparking the biggest protests in the modern history of the Moscow-backed ex-Soviet republic of 9.7 million. He denied electoral fraud.

Ahead of Tuesday’s ruling, allies of Babariko, the former head of Belgazprombank, said the charges against him had been fabricated to thwart his political ambitions.

“It’s an insane term for a man who decided to go into politics and became one of the leaders who woke the country from a long sleep,” said Sviatlana Tsikhanouskaya, a protest leader who fled Belarus amid a post-election crackdown. “…The regime is doing everything to kill off any thought that even remotely resembles faith and hope. But for Viktor – as for thousands of innocent people in prison – what matters most is the hope in our hearts,” she said.

The US embassy in Minsk criticised the ruling. “The cruel sham of the Belarus court system is on display today…showing the Lukashenka regime will stop at nothing to keep power,” the embassy said on Twitter.

Council President Charles Michel who is in Vilnius where he met with Tsikhanouskaya denounced the ruling and called the trial “a political move”.

The #EU stands firmly with the people of #Belarus and will continue to do so.

The legitimate call for a democratic future and respect for fundamental freedoms and human rights must finally be heeded. pic.twitter.com/DyTB6iBfUw

After Babariko was barred from running and detained, Maria Kolesnikova, one of his allies, joined forces with two other women – Tsikhanouskaya and Veronika Tsepkalo – to lead the opposition campaign.

Kolesnikova is now in jail, Tsepkalo has fled abroad, and Tsikhanouskaya, who ran against Lukashenko and has since emerged as the opposition’s most prominent figure at liberty, is trying to undermine Lukashenko from neighbouring Lithuania.

The UN Special Rapporteur told Belarus on Monday to immediately free some 530 jailed people whom rights groups consider “political prisoners” as Washington’s envoy hinted at the possibility of further economic sanctions against Minsk.

UN Special Rapporteur Anaïs Marin said more than 35,000 people had been arbitrarily detained over the past year and that the fear of repression has caused tens of thousands of Belarusians to flee to seek refuge abroad