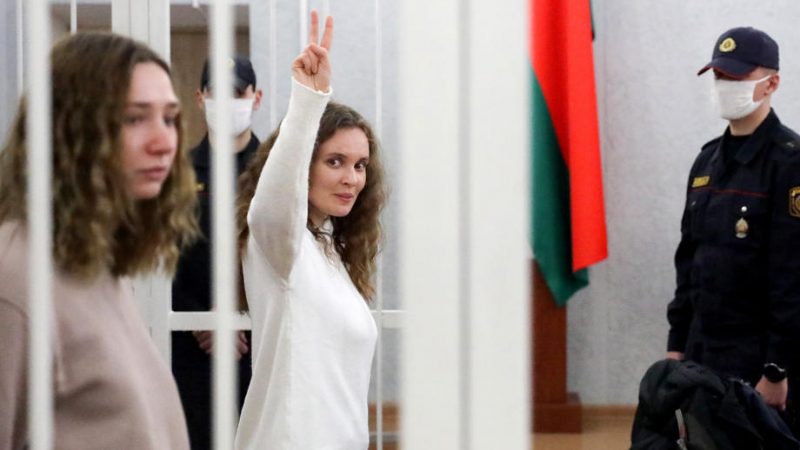 epa08998119 Belsat journalists Katerina Bakhvalova (Andreeva) (C) shows the victory sign standing next to Daria Chultsova (L) inside a cage before the start of a trial in Minsk, Belarus, 09 February 2021. Both journalists were detained in November 2020, when they were reporting on anti-government protests. They face up to three years in prison on charges of organizing and preparing actions that grossly violate public order. EPA-EFE/STRINGER

“Wearing a journalist vest in Belarus doesn’t protect you, it makes you a target,” Belarusian opposition leader Svetlana Tsikhanouskaya told EU officials and diplomats during a virtual meeting on Monday (8 March).

The meeting, organised by Poland’s ambassador to the EU, Andrzej Sadoś, was attended by ambassadors of the EU27 countries, as well as Canada, the United States, and Great Britain, and representatives of the European Commission, and was meant to raise awareness of the situation of journalists in Belarus.

“Belarussian reporters are taking risks every day to provide the audience with objective information, thanks to them the world knows the truth about what’s happened in our country,” Tsikhanouskaya said, according to a recording made available to EURACTIV, and urged the international community to express solidarity with Belarusian media.

Sadoś said there have been “scandalous trials in recent weeks in which Belarusian journalists have been sentenced to prison for carrying out their duties – the repression of the media in Belarus is unacceptable to the EU”.

The Belarusian Association of Journalists said in a recent report that 481 journalists were detained in 2020, twice the number of detentions over the previous six years combined.

At least 10 journalists have faced criminal charges and currently remain in custody.

In one of the more prominent cases, two female journalists in Belarus were found guilty in February of violating public order and sentenced to two years in prison after they covered a protest against authoritarian President Alexander Lukashenko.

Katsiaryna Bakhvalava (27), and Daria Chultsova (23), both of the Poland-based Belsat TV channel, were arrested in November after police broke down the door of a Minsk apartment where they were doing a live stream of a demonstration in the Belarusian capital.

Belsat, which made its first broadcast in December 2007, is the first and only independent satellite television channel for Belarus, broadcasting news, current affairs, and cultural programmes from Poland, whose government is one of the most active supporters of the democratic opposition in Belarus.

The Belarusian Association of Journalists has deemed the sentence “politically motivated”, designed to scare journalists and prevent accurate reporting of socially significant events.

The EU condemned in February what it said was a “shameful crackdown on media” in Belarus and called for a reversal of the two journalists’ verdicts.

Speaking to EURACTIV on the sidelines of Monday’s event, Agnieszka Romaszewska-Guzy, founder and head of the Belsat TV, said the press freedom situation in Belarus has deteriorated over the past year.

“If you are trying to work and you go to the street, you never know whether you will return or not, whether you return the same day or maybe the next day, or maybe in 15 days or 15 weeks – that’s an impossible situation to work in,” she said, adding that some of their journalists can get up to three fines a day and their electronic equipment is often confiscated.

She called upon EU policymakers to think about ways to channel support to Belarussian media and stressed she would “expect more extensive sanctions against the repression apparatus in Belarus, the current list is disproportional”.

“Every judge and every prosecutor who works on a political case, every police or militia officer, they should know that they are not going to have the freedom to do what they currently do or leave Belarus,” Romaszewska-Guzy added.

At the same time, there is an increased amount of disinformation about Belarus, disseminated through the channels that have already been active in spreading pro-Kremlin propaganda.

“Disinformation in Belarus is coming not only from the side of Belarussian state media, but also Russian media, which have a wide significance, so we’re encountering two kinds of propaganda,” she said.

“It’s not easy to fight against them because they have enormously bigger means than we do,” Romaszewska-Guzy said, adding that Belsat’s yearly budget “covers 10 days of broadcasting of Russia Today”.

However, Romaszewska-Guzy also recalled that 2019 surveys showed that around 80% of viewers trust her channel.

Asked about women being the driver of the protests but also active in all aspects of civil society, Romaszewska-Guzy admitted that “this is something new, also something new in the Belarusian history, as women have also become the last resort of the country.”