Belarus’s leader Alexander Lukashenko defended his isolated country’s human rights during a visit to Austria Tuesday (12 November), as he seeks closer ties with the European Union amid tensions with Russia.

Often described by its critics in the West as “Europe’s last dictatorship”, Belarus has been the target of Western sanctions over its poor rights record and lack of fair elections. The 65-year-old Lukashenko has rarely travelled to other European countries.

However in recent years the West and Belarus have sought to improve ties as the Kremlin has pushed for a closer relationship between Moscow and Minsk.

Lukashenko said his country was “wedged in like in a pair of pliers” between East and West.

“Despite this we are doing sometimes very well,” Lukashenko told reporters during a joint press conference with Van der Bellen.

Asked about his country’s human rights record, he said: “It is a country where one can relax in peace and security.”

“To survive we have used various methods, but no one can say that these were not democratic or hurt the people of Belarus,” he added.

Reporters Without Borders ranks Belarus 153rd out of 180 countries in its world press freedom index, and it is still not part of the Council of Europe, the continent’s leading rights body.

Van der Bellen, who visited Belarus last year, said the two men had discussed many issues, including the Ukraine crisis, hoping to “deepen” their relationship.

Austria had also recommended that Belarus — the only European country that still uses capital punishment — should at least put a moratorium on the death penalty.

Lukashenko said the death penalty could only be scrapped with a referendum, and one held in 1996 rejected ending the practice. He added that opinions had not changed since, making it unnecessary to hold another referendum.

International observers have criticised Belarus for not holding free and fair votes. Parliamentary elections will take place this Sunday.

For Lukashenko, being hosted by an EU member represents a “diplomatic success” ahead of the elections, political analyst Artyom Shraibman said.

Van der Bellen, whose country is not a NATO member and often portrays itself as a neutral intermediary between world powers, said he saw a “certain rapprochement” between Belarus and the EU.

Belarus has resisted Russian pressure to recognise the annexation of Crimea.

Lukashenko said the EU was “becoming an important political and business partner for us”.

Russia is Belarus’s closest ally and the two have formed a nominal “union”, with close trade and military cooperation.

However in recent months Moscow has been pressuring Minsk into even closer integration. While Lukashenko has welcomed closer ties with Moscow, he has pushed back at the idea of outright unification.

Moscow has denied that this is what it wants. Kremlin spokesman Dmitry Peskov has said it was “normal” for Minsk to have contacts with other countries. 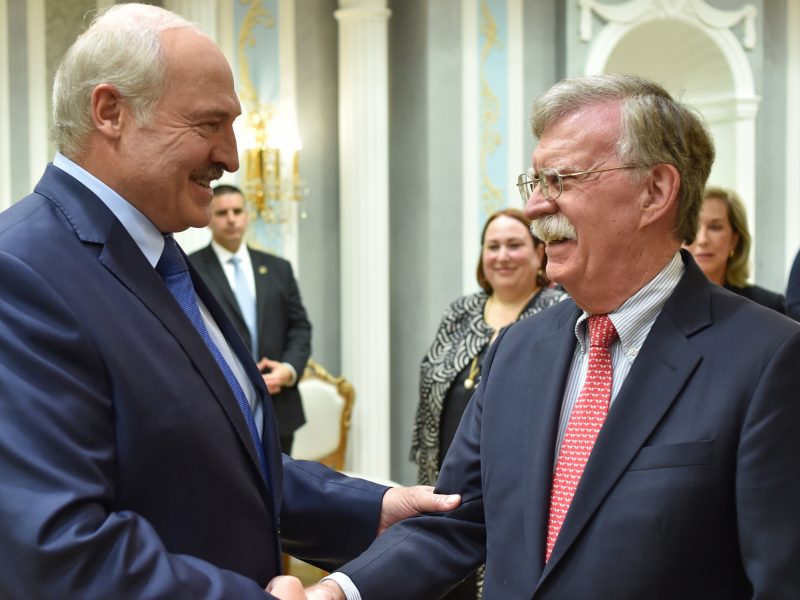 Russia fumes over Belarus's refusal to host air base

Russia said on Thursday (26 September) that Belarus’s refusal to host a military air base backed by President Vladimir Putin had been an “unpleasant episode”, a rare public display of disagreement between the close allies.

Lukashenko said in September he also wanted to improve ties with Washington as he welcomed then White House national security advisor John Bolton for rare talks in Minsk.

“The U.S. and EU, worried about Russian influence, want to keep President Aleksander Lukashenko of #Belarus close—but not too close.” ⁦@WSJ⁩ https://t.co/zoldkhp8fW

The Soviet-era collective farm chief became Belarus’s first post-independence president in 1994 and has dominated the country ever since.

In 2016, Lukashenko visited Italy and the Vatican after the European Union lifted most of the sanctions it had imposed in recent years against him and other Belarusians in a move to encourage progress on human rights.

Lukashenko has repeatedly been invited to visit Europe since 2016, but had declined until now.

After Russia, Austria is one of Belarus’s biggest sources of foreign direct investment. Belarus media labelled it “the most loyal” of EU members to Minsk.

Lukashenko has visited Austria privately, skiing with his family in 2002.

In March this year, then chancellor Kurz visited Belarus and presented Lukashenko with a pair of hand-made wooden skis.

Kurz is trying to form another government after his party’s coalition with the far-right collapsed in May.