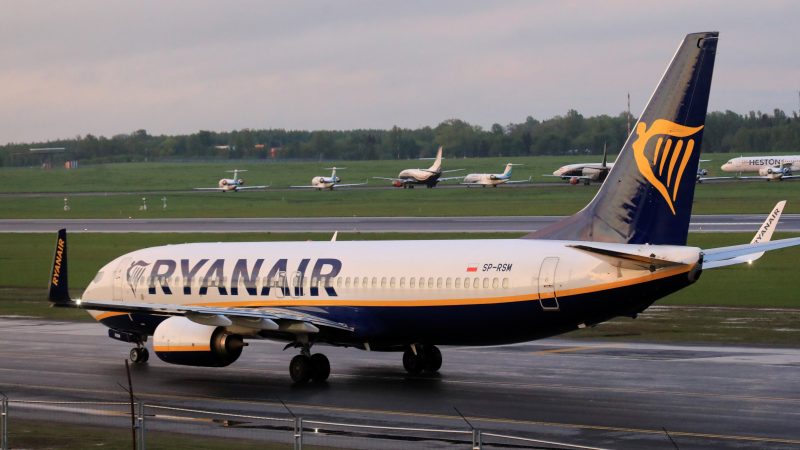 A Ryanair Boeing 737-800 lands in the Vilnius International Airport, in Vilnius, Lithuania, 23 May 2021. As Ryanair spokeswoman said, 'the aircraft carrying scores of passengers from Athens to Vilnius was diverted to the Belarusian capital under the escort of a Mig-29 fighter jet after its crew was notified by authorities in Minsk of a 'potential security threat on board'. A Ryanair flight from Athens, Greece to Vilnius, Lithuania, with Belarus' opposition journalist Roman Protasevich onboard, has been diverted and forced to land in Minsk on 23 May 2021, after alleged bomb threat. [Stringer/EPA/EFE]

Belarus forced a passenger plane carrying a wanted opposition activist to divert and land in its capital, provoking a furious outcry from world leaders who described it as an “act of state terrorism” ahead of an EU summit Monday (24 May) expected to toughen sanctions on Minsk.

Dissident journalist Roman Protasevich was detained on Sunday after Ryanair flight FR4978 was pulled from its Athens-to-Vilnius route and — accompanied by a Belarusian fighter jet — diverted to the capital city, state television reported.

Shocking and alarming news from #Belarus on the arrest of journalist Roman Protasevich. European Air Space cannot be hostage of a dictator. The EU must react urgently.
This act of terrorism must have unambiguous consequences. https://t.co/YVLZjogf6r

Passengers described seeing the 26-year-old, who had been living in Poland, looking nervous as the flight was diverted to Minsk.

“He just turned to people and said he was facing the death penalty,” Monika Simkiene, a 40-year-old Lithuanian, told AFP in Vilnius after landing — without Protasevich — several hours later.

Edvinas Dimsa, 37, said: “He was not screaming, but it was clear that he was very much afraid. It looked like if the window had been open, he would have jumped out of it.”

The incident comes as the European Union is set to discuss toughening its existing sanctions against Belarus, imposed over the crackdown by the regime of President Alexander Lukashenko on opposition protesters, at a pre-planned summit on Monday.

“The outrageous and illegal behaviour of the regime in Belarus will have consequences,” EU chief Ursula von der Leyen tweeted, calling for Protasevich’s release, and adding those responsible “must be sanctioned”.

The outrageous and illegal behaviour of the regime in Belarus will have consequences.

Those responsible for the #Ryanair hijacking must be sanctioned.

Lithuania and Latvia have called for international flights not to use Belarusian airspace.

The International Civil Aviation Organization — the UN’s civil aviation agency — said the forced landing “could be in contravention of the Chicago Convention”, which protects nations’ airspace sovereignty.

Minsk’s airport had released a statement earlier saying the plane had to make an emergency landing there at 1215 GMT following a bomb scare.

“The plane was checked, no bomb was found and all passengers were sent for another security search,” said Nexta, a Belarus opposition channel on the Telegram messaging app, which Protasevich previously edited.

Lukashenko’s press service said on its own Telegram channel the president had given the order to divert the flight and had ordered a MiG-29 fighter jet to accompany the plane.

It comes as Belarus authorities intensify their crackdown on the opposition following historic protests that gripped the ex-Soviet country after last year’s disputed presidential election.

“This shocking act perpetrated by the Lukashenka regime endangered the lives of more than 120 passengers, including US citizens,” he said in a statement, using an alternative spelling of the Belarusian leader’s name.

He added on Twitter: “We demand an international investigation and are coordinating with our partners on next steps.”

European leaders reacted with fury. In Athens, Prime Minister Kyriakos Mitsotakis tweeted: “The forced landing of a commercial plane to detain a journalist is an unprecedented, shocking act.” The statement was retweeted by the US ambassador in Athens, Geoffrey R. Pyatt.

The forced landing of a commercial plane to detain a journalist is an unprecedented, shocking act. We demand all passengers’ immediate release. Tomorrow’s #EUCO must address the need to step up pressure on Belarus. Enough is enough.

Lithuanian President Gitanas Nauseda described Belarus’s actions as “abhorrent” and prosecutors said they had opened a criminal investigation for the hijacking of a plane.

🇪🇺 leaders will discuss a state-sponsored terror act in #Minsk tomorrow at #EUCO. My suggestions: airspace over 🇧🇾 shall be recognized unsafe, 🇧🇾 aircrafts shall not be accepted in 🇪🇺 airports, immediate investigation by @icao & serious sanctions against the regime.

The government in Ireland, where Ryanair is headquartered, described the incident as “absolutely unacceptable”, while NATO called it “dangerous” and demanded an international investigation.

Since last August’s disputed election, Belarusians have taken to the streets demanding the resignation of Lukashenko, who has ruled for over two decades.

The two — both now based in Poland — were accused of causing mass unrest, an offence punishable by up to 15 years in jail.

Belarus also labelled the Nexta Telegram channels and its logo “extremist” and ordered them blocked.

With close to two million subscribers on Telegram, Nexta Live and its sister channel Nexta are prominent opposition channels and helped mobilise protesters.

“It is absolutely obvious that this is an operation of secret services to capture the plane in order to detain activist and blogger Roman Protasevich,” exiled opposition leader Sviatlana Tsikhanouskaya said on Telegram.

The opposition says that Tsikhanouskaya, who fled to neighbouring Lithuania after the election, was the true winner of last year’s presidential vote.

A member of the Nexta team, Tadeusz Giczan, tweeted that representatives of the Belarusian security agency had been on Protasevich’s flight.

“Then when the plane had entered Belarus airspace, the KGB officers initiated a fight with the Ryanair crew insisting there’s an IED onboard,” he said.

A spokeswoman for state company Lithuanian Airports, Lina Beisine, told AFP that Minsk airport had said the flight was redirected “due to a conflict between a member of the crew and the passengers”.

In a statement — that did not mention Protasevich — Ryanair said the flight’s crew had been notified by Belarus air traffic control of “a potential security threat on board” and were instructed to divert to Minsk, the “nearest” airport.

The EU and the United States have sanctioned Lukashenko and dozens of officials and businessmen tied to his regime with asset freezes and visa bans.

Belarus: coercive act by 🇧🇾 regime against @Ryanair flight jeopardised all on board. International investigation must be carried out to ascertain any breach of international aviation rules.
🇪🇺 will consider the consequences of this action https://t.co/aHTFrpn8GS