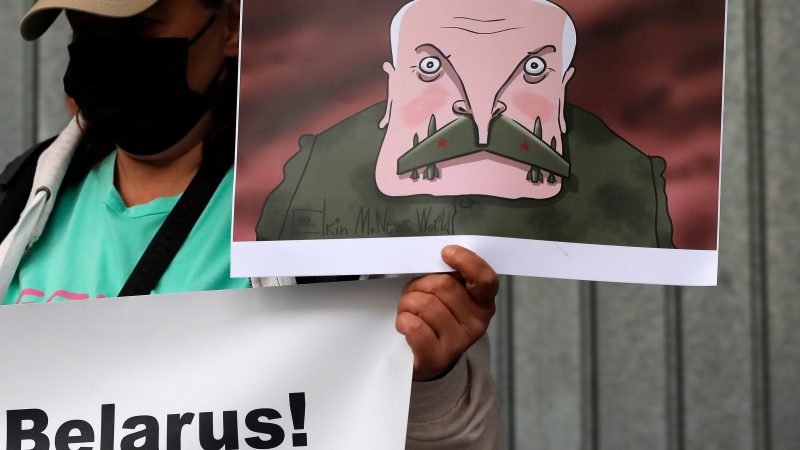 A Romanian civil rights activist holds a cartoon-placard depicting Belarusian President Aleksandr Lukashenko, while protesting in front of the Embassy of the Republic of Belarus in Bucharest, Romania, 30 May 2021. [EPA-EFE/ROBERT GHEMENT]

The measures come into force amid an unprecedented legal sweep of government critics and civil society in the ex-Soviet country following the presidential vote last year that sparked huge demonstrations.

The laws mean anyone who has been charged with taking part in two unauthorised protests may be jailed for three years over a repeat offence, according to government documents published online.

“Extremist activity” — or promoting it — is punishable by up to six years. Financing it carries a maximum term of five years, the documents show.

The independent Tut.by news website, which was recently raided by authorities, said it was difficult to determine what activities could be deemed extremist under the new laws.

Several protesters were recently handed lengthy terms on these charges related to the rallies that erupted following Lukashenko’s claim to a sixth presidential term in August.

A new article — carrying a maximum five-year penalty — was also added to the criminal code penalising publication of personal information of police and their family members.

During the protests, the opposition repeatedly published identities of law enforcement, who wore balaclavas at violently dispersed rallies that sometimes drew more than 100,000 people.

The unprecedented demonstrations saw thousands arrested and left several dead. They have since subsided, but activists and journalists are still receiving jail terms.

The United States and the European Union slapped sanctions and asset freezes on regime officials and Lukashenko, who has been in power for over two decades.

His government was hit with fresh penalties in May after Lukashenko forced a Ryanair flight with an opposition activist on board to land in Minsk and arrested him and his girlfriend.

A delegation from the European Union, the United States, the United Kingdom, Switzerland and Japan met with Belarus’s Foreign Minister Vladimir Makei on Tuesday and called for an end to the “inhumane treatment” of activists and independent journalists.