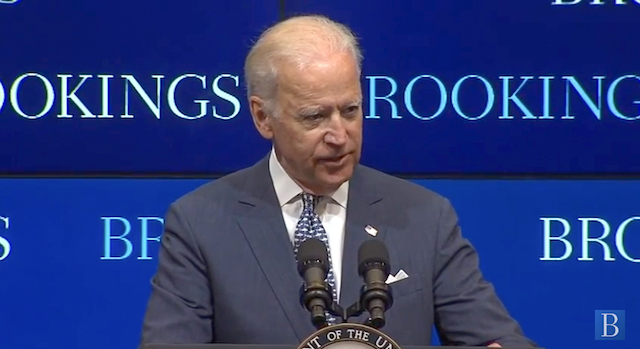 Ukraine’s government needs to investigate and prosecute corruption at all levels and implement difficult political reforms to retain the support of the United States, US Vice President Joe Biden said yesterday (27 May).

The White House has given Kyiv $470 million in economic assistance and signed two loan guarantees, each worth $1 billion, since pro-Western parties took office in Ukraine more than a year ago. Another $1 billion US loan guarantee has been promised by the end of the year, but is contingent on reforms, Biden said in a speech at the Brookings Institution.

“Ukraine needs to use all the tools at its disposal to limit the ability of the oligarchs to abuse their market position or exert pressure on government officials,” Biden said.

“So long as Ukrainian leaders keep faith with the project of reform, the United States will continue to stand with them,” said Biden.

Biden’s speech comes as President Barack Obama prepares to discuss the situation in Ukraine with his European counterparts at the G7 summit in Bavaria, Germany next weekend.

The response to Russian actions has broad implications for international order, Biden said.

“China and many other nations are watching very closely how the world responds,” he said.

The conflict, which has killed more than 6,100 people, has tested the unity of the West and NATO, Biden said. He said Russian President Vladimir Putin has tried to co-opt support by “funding both right-wing and left-wing anti-systemic parties throughout Europe” as he wagers he can outlast the Ukrainian government and scare off its allies.

“President Putin sees such political forces as useful tools to be manipulated, to create cracks in the European body politic which he can then exploit,” Biden said.

European Union leaders agreed in March to keep economic sanctions on Russia in place until the Minsk peace deal is implemented, a milestone that is not expected to be reached until the end of the year.

The sanctions are set to expire in July, and EU leaders must make a formal decision on extending them at the EU summit in June.

“It is my hope and expectation that when European leaders meet again at the end of June, they will renew existing sanctions until Minsk is fully implemented,” Biden said.