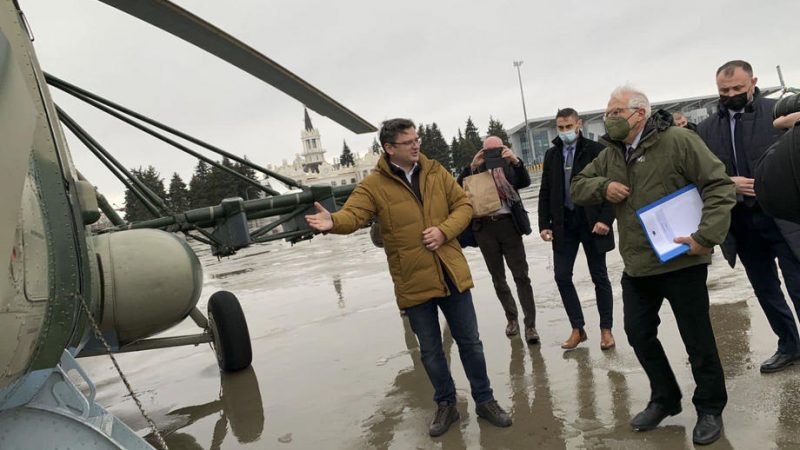 EU’s chief diplomat Josep Borrell vowed the bloc’s full support for Ukraine Wednesday (5 January) as he visited the country’s war-torn east just ahead of a flurry of talks between Western and Russian officials on the crisis, in which the EU had been largely left out.

Borrell’s visit was the first-ever visit by an EU foreign policy chief to eastern Ukraine since war broke out nearly eight years ago.

“Any military aggression against Ukraine will have messy consequences and severe costs,” he said in the village of Stanytsya Luganska in the Lugansk region.

“And we are coordinating with the US, with NATO and other like-minded partners in order to work for de-escalation,” he added.

Kuleba said Ukraine and the EU had a common goal, “to de-escalate the situation through diplomatic means, so Moscow reduces tensions and abandons its aggressive intentions”.

Borrell said the timing was right because “the geopolitical landscape is changing very quickly, and the conflict on the borders of Ukraine is on the verge of getting deeper.”

He also met soldiers and civilians in the east before flying back to Kyiv, where he will hold talks with President Volodymyr Zelenskiy on Thursday.

Over the past weeks, EU diplomats have voiced fears it is being sidelined as the US, NATO, and Russia will discuss Europe’s security architecture in several meetings in the coming days.

In preparation for next week’s diplomacy, NATO foreign ministers will hold a video conference on Friday, the alliance said in a statement.

It will be followed by talks between US and Russian officials in Geneva on 9-10 January, a meeting of the NATO-Russia Council on 12 January and discussions under the framework of the Organisation for Security and Cooperation in Europe (OSCE).

Russia’s demands include guarantees that Ukraine and other former Soviet countries will not join NATO and a rollback of the alliance’s military deployments in Central and Eastern Europe.

The EU “cannot be a neutral spectator in the negotiations,” Borrell stated on Tuesday as he started his three-day visit to Ukraine.

“There is no security in Europe without the security of Ukraine. And it is clear that any discussion on European security must involve the EU and Ukraine,” Borrell repeated on Wednesday.

Germany and France, meanwhile, have stepped up diplomatic efforts to mediate in the stand-off between Kyiv and Moscow, seeking bilateral contacts with Moscow.

Adviser talks in the Normandy Four format – Germany, France, Ukraine and Russia – are scheduled for Thursday.

European security is also likely to take centre stage next week when EU foreign and defence ministers meet for an informal gathering in Brest, organised under the helm of the French presidency of the EU Council.