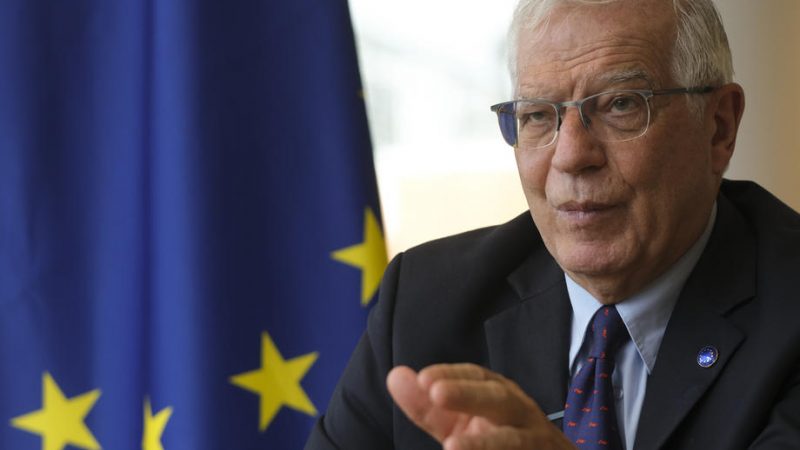 The EU is intent on making Belarusian President Alexander Lukashenko pay a high price for the forced landing of a European airliner to arrest regime opponents, the bloc’s foreign policy chief Josep Borrell told AFP in an interview.

“The heads of state and government asked us on Monday (at a summit) to propose sectoral economic sanctions, something that we are not used to doing in the EU, and there are some that immediately come to mind,” Borrell said in an interview Wednesday (26 May) in Lisbon on the eve of an informal meeting of foreign ministers.

“Belarus is a big exporter of potash: $2.5 billion. Everything goes through the Baltic countries. It’s easy to control it, if you really want to,” he said.

“One can also imagine that the gas which arrives in Europe via Belarus could come to Europe via another pipeline, and Belarus would lose the transit fees, which is not negligible,” he added.

EU leaders hit back at Minsk, agreeing to ban Belarusian airlines from the bloc and urging EU-based carriers not to fly over its airspace.

The leaders also tasked Borrell with coming up with further “targeted economic sanctions” against the Belarusian authorities to add to the 88 regime figures and seven companies already on a blacklist over a crackdown on the opposition.

“Hijacking a plane to stop a passenger, that required a strong reaction. We made decisions on the spot Monday for air transport and they will hurt. But the European leaders have asked for more. If we did not now employ the language of power, that would have been proof that we did not want to do it,” Borrell said.

“Europeans are still hesitant about economic sanctions, but this time, we really have to take measures that Lukashenko will feel,” he stressed.

“I don’t think it will take a long time to decide. If we want to do it, we can do it quickly,” he insisted.

EU foreign ministers meeting in Portugal on Thursday were set to begin discussions on the Belarus sanctions – but no decision was expected immediately, Borrell said.

While the forced landing of the plane in Minsk has thrust Belarus to the top of the EU’s agenda, Borrell warned that in the longer-term, the bloc faces more problems working out how to deal with Lukashenko’s key backer Russia.

“Everything cannot be achieved through sanctions. With the dynamic ‘I sanction you, you sanction me’, we are entering a spiral,” he said.

EU leaders “asked us to present in June a report in which we analyse where we are with Russia and what we can do. But I insist: we have not been asked for sanctions,” he said.

“Relations with Russia are very bad and we are now at a point where we have to decide what will be next.”

Borrell said that President Vladimir Putin had opted for “confrontation” with the EU and “is becoming more and more authoritarian” at home.

“But we have to be careful. Facing Russia, we need the unity of the EU to succeed in stopping it when it violates international law, but we must also be able to talk to it,” he said.

“Unfortunately the EU does not always manage to find unity. Each member state has its interests and the temptation of some is to go it alone with the feeling that they will do better.”

Borrell pointed to the relationship with the United States as one where the EU is also split as some in the bloc push for Europe to act more independently on the world stage.

“Here too we are very divided. There are countries which will always align themselves with the American positions and others which have a more autonomous vision,” he said,

“Every time I say the words ‘strategic autonomy’, there are member states who say you want us to distance ourselves from the United States, you want to weaken NATO. But that has nothing to do with it,” he insisted.

“Sometimes I have the feeling that some people feel much more reassured by a state of dependence in the partnership with the United States,” he comments.

“There is no alternative to NATO for the territorial defence of Europe. But there are problems for which we Europeans should be able to provide a solution, pan-European, because neither NATO nor the United States will deal with it,” he insisted.

The EU’s top diplomat highlighted the challenge of a rising China and the US decision to withdraw from Afghanistan as examples of the need to be able to act independently.

“If Europe wants to be a global player, it must be able to defend its economic interests with China without having to need the sponsorship of the United States,” he said.

On Afghanistan, Borrell said he was “not very optimistic about what will happen” once US and NATO troops pull out.

“For us Europeans the question arises of how to manage our presence. We must ensure a hospital and an airport that work if we want to maintain a minimum presence, but not with a military presence,” he said.