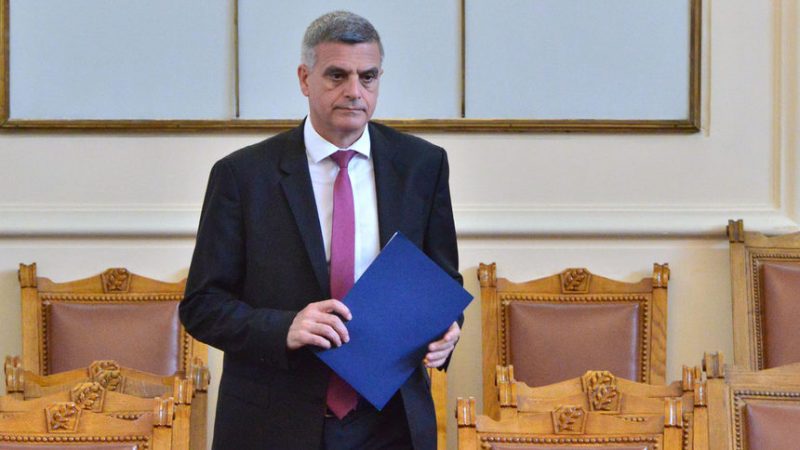 This article was updated with the name of the new defence minister.

Bulgarian Defence Minister Stefan Yanev has been asked to resign by Prime Minister Kiril Petkov on Monday (28 February) after he caused outrage in the government by stating that the Russian invasion of Ukraine should not be called “war”.

Petkov said he has the support of all coalition partners, including his party, “We continue the change”, the Bulgarian Socialist Party (BSP), Savi Trifovov’s “There is such a people”, and Democratic Bulgaria, led by Hristo Ivanov.

“My military minister cannot use the word “operation” instead of “war”, he said.

After the matter was discussed by politicians on Sunday evening, an extraordinary session of parliament will be convened to vote on the resignation and the name of Yanev’s successor will be announced on Monday afternoon.

Asides from his comments on how to refer to the war, he wrote on Facebook on Sunday that calls for his resignation “put at risk national security”.

Yanev explained that the attacks had the goal of replacing him with someone who would be more cooperative in promoting foreign interests in Bulgaria. This, he added, would have “dangerous” consequences for the country, and he remained adamant he would not step down.

“Don’t expect me to resign in this geopolitical situation”, Yanev wrote.

Yanev, a former army general, was the chief of cabinet of President Rumen Radev, who made him a  caretaker minister, a post he occupied from May to December 2021. Petkov then served as economy minister in Yanev’s first caretaker cabinet (May-September 2021).

“It is not in Bulgaria’s interest to bow our heads”, Petkov said, alluding to a popular saying in Bulgarian that “a sword does not cut a bowed head”.

The policy of “bowing our heads” has characterised Bulgarian politics vis-à-vis world powers since communism.

“It is in Bulgaria’s interest to strongly condemn the policies and actions of even the great powers”, Petkov continued. He pointed out that the European Union has never been more united.

Petkov explained that he had worked successfully in the first Yanev cabinet last year. “But no minister in this government has the right to his foreign policy, especially on Facebook. Second, no minister can tell the government that his stay is a function of government stability. This government will not pursue stability; it will pursue the right actions and the principled positions.”

Yanev entered the government from the quota of “We continue the change”, and consequently, his successor is expected to be nominated by the same force.

We will propose as minster of defense Todor Tagarev, said the Prime minister following consultations on Monday.

Prof. Todor Tagarev is a military expert and longtime lecturer at the Bulgarian Air Force School and the Military Academy in Sofia. He was acting Minister of Defense in Marin Raykov’s government in the spring of 2013 and is known for his pro-Western positions. From 2005 to 2008, Tagarev was a member of the NATO Research and Technology Board.

However, on Tuesday it became clear that the coalition partners couldn’t endorse Tagarev and the Prime Minister put forward the name of Bulgaria’s ambassador to NATO, Dragomir Zakov.