Speaking to the press hours ahead of the publication of the ECA report on EU assistance to Ukraine, Szabolcs Fazakas, who led the audit, admitted that the EU had no chance to analyse the spending.

In his words, there was “urgency to save Ukraine” which made scrupulous budget spending verification procedures a secondary objective.

When the money goes for budget support, “we can only control that the transfer took place”, Fazakas said.

The crisis in Ukraine erupted after its former president Viktor Yanukovich cancelled plans to sign trade and political pacts with the EU in November 2013 and instead sought closer ties with Russia, triggering protests that turned bloody and drove him from power.

Russia promised Yanukovich a $15-billion (€11 billion) bailout for Ukraine, a move seen as a reward for Yanukovich’s decision to reject the signing of the Association Agreement in favour of closer ties with Moscow. Yanukovich’s Prime Minister, Mykola Azarov, then asked the EU for €20 billion in aid to offset the signature of the Association Agreement. Both Yanukovich and Azarov were ousted with the  February 2014 Ukrainian revolution. 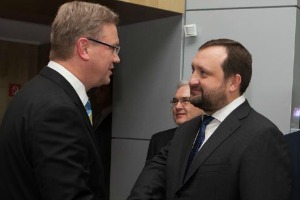 Thousands of anti-government protesters gathered in central Kiev, rebuilding barricades torn down by police yesterday (12 December) as the European Union held out a promise of increased aid for Ukraine if it signed an Association Agreement (AA).

According to the ECA report, the financial needs of Ukraine increased after the Revolution of Dignity, and because of the conflict with Russia. In early 2014, the Ukrainian government identified their foreign aid needs to be at around $35 billion over the period 2014-2015.

In particular, the deficit of the state-owned gas company Naftogaz was an increasing drain on the state’s finances, rising from 1.9% of GDP in 2013 to 5.7% of GDP in 2014, when it was higher than the overall government deficit of 4.6%.

In March 2014, the Commission announced an indicative Ukraine support package of €11.2 billion, including up to €8 billion in loans from the European Investment Bank (EIB) and the European Bank for Reconstruction and Development (EBRD) to support the reform process in the 2014-2020 period.

Fazakas said the Commission was “generous enough” in 2014 to answer Ukraine’s needs and provide budget support as the quickest way to rescue its finances. But he explained that budget support did not allow for the control of how the money is spent and how programs financed with such funds are implemented.

“There was an urgency on paying [budget support], in cooperation with IMF, to save Ukraine”, Fazakas said, adding that once the money was paid it was “very hard to ask for a right implementation of the programme”.

The report says the results of EU assistance to Ukraine so far are “fragile” and the risks posed by the former and new oligarchs remain high. Over most of the period audited, the unstable political, legislative and administrative context limited the effectiveness of EU assistance, the auditors say.

“Management changes jeopardised the reforms and low salaries created openings for corruption. Further steps are needed to meet objectives”, said Fazakas, in an allusion to the resignations of reformist ministers in the previous government.

In the gas sector, the EU-Ukraine dialogue on gas was affected by Ukraine’s wavering commitment and by diverging views among EU stakeholders, the report says.

It adds that the design of EU assistance to improve governance and security of supply, under the so-called trilateral gas deals, included conditions that were vague and difficult to assess. A third attempt to strike a trilateral gas deal securing the Winter Package for Ukraine and the security of gas supply to Europe is underway.

Fazakas said that as a former energy minister, he was urging politicians to find a “special strategy” for the “winter packages”.