The EU vowed three weeks ago to impose sanctions on Belarus for alleged election fraud and human rights abuses, but the consensus-driven union has been prevented from fulfilling that promise by one of its smallest members, Cyprus.

Cyprus will not agree to the Belarusian sanctions unless the EU also puts sanctions on its neighbour, Turkey, in a separate row that has raised tensions in the Eastern Mediterranean. 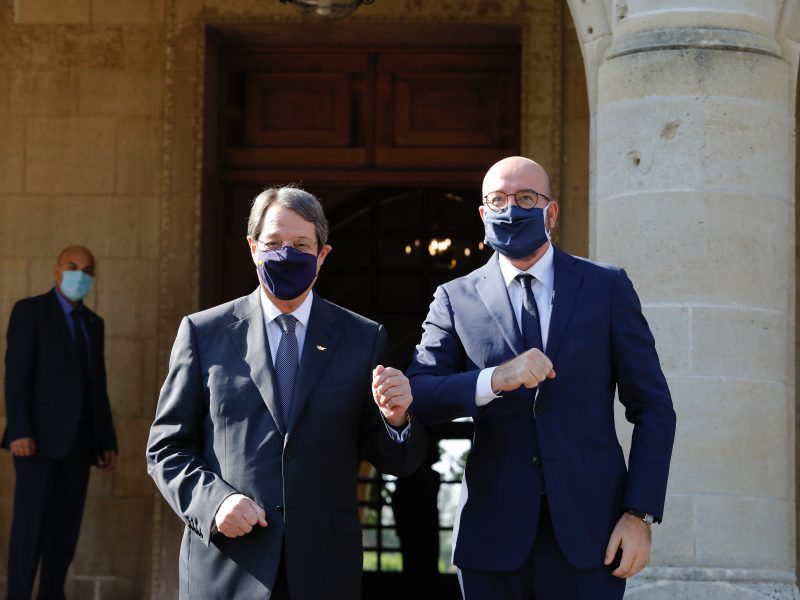 European Council chief Charles Michel pledged Wednesday (16 September) that the bloc will defend the rights of member state Cyprus in its standoff with Turkey over maritime and energy rights.

EU envoys sought in a meeting on Wednesday to break the impasse, but the discussions failed, even as the bloc’s chief executive, Ursula von der Leyen, bemoaned in her State of the Union speech that EU diplomacy was too often paralysed by a system that gives one country veto power over the other 26.

“The EU is at risk of irrelevance, it is a threat to our credibility,” said an EU official. “We need to move to qualified majority voting on specific issues, human rights, sanctions.”

The deadlock over Belarus sanctions, which are meant to demonstrate Europe’s commitment to democracy and human rights, comes a week before a summit of EU leaders that now risks being bogged down over whether to take a hard line with Turkey.

Cyprus says it cannot support sanctions against Belarus officials on a list that was drawn up after the contested 9 August election unless action is taken in parallel against Turkey.

“We have no alternative but to act the way we are acting,” said a Cypriot diplomat. “We have no issues with imposing sanctions on Belarus but we consider that we had a political understanding for both processes to go forward in parallel.”

Cyprus wants the EU to impose further sanctions against companies and individuals in Turkey due to a dispute over energy resources in the Eastern Mediterranean Sea.

Turkey began drilling for oil and gas near Cyprus last year despite warnings from Brussels, and fears of a military escalation in the Eastern Mediterranean have mounted after NATO allies Greece and Turkey held naval drills in the area.

Cyprus has been frustrated that some EU countries, including Germany, are reluctant to antagonise Turkey and lean towards dialogue, trade and visa links to calm the situation.

The dispute has brought to a head other tensions, from Turkey’s involvement in Syria and Libya to what the EU says is growing authoritarianism under President Recep Tayyip Erdoğan.

EU foreign ministers meeting next Monday will try to find a way through what one senior EU diplomat called “the single most worrying issue for the EU in the coming days”.

Another diplomat said Cyprus had sought a compromise, suggesting the highest-ranking Turk be taken off a list of individuals proposed for sanctions, although he said that was unlikely to fly and the dispute may drag on to the 24-25 September summit.

The Cypriot diplomat said he had low expectations for any agreement by the leaders on how to deal with Turkey.

“I have serious doubts about having this summit,” the Cypriot diplomat said. “I think it will show the Turks our divisions rather than show them that we are serious about it.”