‘Dozens’ of refugees, including women and children, killed by rocket fire in Ukraine 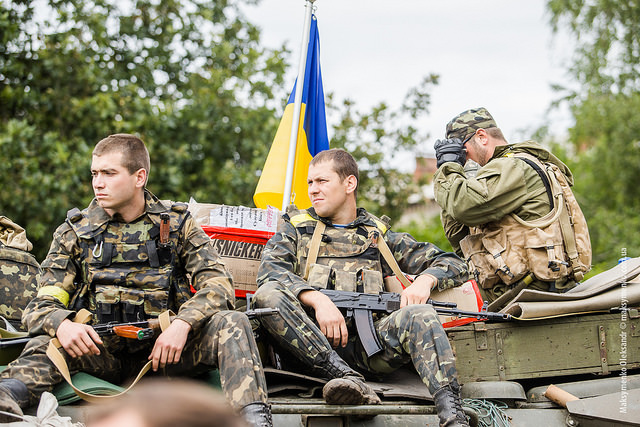 Government forces near Slovansk in July. The Ukrainian military blamed rebels for the deaths of dozens of refugees after a rocket attack on a convoy of buses near Khrashchuvatye in Ukraine. [Sasha Maksymenko/Flickr]

Dozens of people, including women and children, were killed as they fled fighting in eastern Ukraine yesterday (18 August) when their convoy of buses was hit by rocket fire, military spokesmen said.

Ukraine accused pro-Russian rebels of targeting the convoy, which it said was bearing white flags when it was hit near the eastern city of Luhansk. The separatists denied responsibility for the attack and one rebel leader suggested the incident might never have taken place.

“The rebels were expecting the convoy and destroyed it entirely,” military spokesman Andriy Lysenko told journalists. “We haven’t been able to count the number of victims […] dozens [were killed].”

The convoy had been in an area of fierce fighting between government forces and the separatists when it came under fire from rebel Grad and mortar launchers, the spokesmen said.

“A powerful artillery strike hit a refugee convoy near the area of Khryashchuvatye and Novosvitlivka. The force of the blow on the convoy was so strong that people were burned alive in the vehicles – they weren’t able to get themselves out,” military spokesman Anatoly Proshin told Ukrainian news channel 112.ua.

Describing the attack as a “bloody crime,” Lysenko said: “A lot of people have been killed including women and children. The number of the dead is being established.”

A rebel leader denied his forces had the military capability to conduct such an assault, and accused Kyiv forces of regularly attacking the area and also using Russian-made Grad missiles.

“The Ukrainians themselves have bombed the road constantly with airplanes and Grads. It seems they’ve now killed more civilians like they’ve been doing for months now. We don’t have the ability to send Grads into that territory,” said Andrei Purgin, deputy prime minister of the self-proclaimed Donetsk People’s Republic.

Another rebel spokesman denied any civilian convoy had been struck, challenging the Kyiv authorities to produce evidence.

“As far as I understand, there was no column of refugees in Luhansk region that fell under fire. We […] did not shoot any convoys [of refugees] with Grads and moreover we did not shoot with any Grads from Russia,” said Alexander Zakharchenko, the main rebel leader in Donetsk.

In Kyiv, a military spokesman, asked about visual evidence of the attack, said there was video footage on the Internet, although this could not immediately be traced.

“My press officer was on the spot. There is no telephone link with him now but he was there and confirmed that the convoy was travelling under white flags and the terrorists were warned that a convoy with peaceful citizens would be passing,” Oleksiy Dmytrashkivsky told Reuters.

He said the press officer had confirmed that many bodies of victims were burned beyond recognition.

The U.S. State Department condemned the shelling of the convoy but said it could not confirm who was responsible.

“We strongly condemn the shelling and rocketing of a convoy that was bearing internally displaced persons in Luhansk … Sadly, they were trying to get away from the fighting and instead became victims of it,” State Department spokeswoman Marie Harf told a news briefing in Washington.

The Kyiv military reported new successes overnight, building on a weekend breakthrough when troops raised the national flag in Luhansk, a city held by pro-Russian separatists since fighting began in April.

Troops blockaded or recaptured rebel-held positions after international talks in Berlin failed to reach agreement on a ceasefire. Nine soldiers were killed.

Western sanctions against Moscow have failed to stem what NATO says is a steady supply of military equipment and men sent from Russia to help the rebels. Russia denies sending support, saying the rebels have seized equipment from the Ukrainians.

President Petro Poroshenko called on his top security advisers on Monday to address claims by the rebels to have received new stocks of heavy Russian military equipment and 1,200 trained Russian fighters.

Referring to the heavy loss in life among government forces, he said: “Today we need to regroup our forces to defend our territory and continue offensive actions by the army.”

Russian Foreign Minister Sergei Lavrov said all issues around a humanitarian convoy sent by Moscow to relieve needy areas of eastern Ukraine had been resolved, but no progress had been made in his talks in Berlin on Sunday with the Ukrainian, German and French foreign ministers on a ceasefire or a political solution.

Russia says it would like a ceasefire to allow aid to get to people trapped by the fighting. A 280-truck convoy sent by Russia and carrying tonnes of humanitarian aid has been stalled at the Ukrainian border since last week, as Kyiv has insisted on formalities so it can be properly distributed by the Red Cross.

Ukrainian Foreign Minister Pavlo Klimkin, who was at the Berlin talks, said in comments posted by the ministry on Twitter: “Russia must close the border and stop shelling. If you have mercenaries and weaponry coming through the border from the Russian federation, how can you reach a ceasefire?”

Problems in the ranks

In a further sign that the rebel leadership may be facing deep problems in its ranks, it said it was setting up military tribunals and bringing in the death penalty for a string of offences including desertion, espionage, attempts on the lives of the leadership and sabotage.

“Introducing the death penalty is not revenge, it is the highest degree of social protection,” the rebels’ website quoted a senior rebel leader, Vladimir Antyufeyev, as saying.

The possibility the rebels might be facing a rout presents Russian President Vladimir Putin, who boosted their ambitions by speaking of the creation of a “New Russia” in eastern Ukraine, with a difficult choice.

If he allows their defeat, he risks losing face before the “hawks” at home and the Russian people who largely applauded Moscow’s annexation of Crimea in March. But maintaining pressure on Kyiv’s pro-Western leaders through further support for the rebels risks wider economic sanctions from the United States and European Union.

Western sanctions have targeted Russia’s financial and energy sectors as well as dozens of people close to Putin, and Russia has retaliated by banning a wide range of U.S. and EU food imports.

Moscow has struggled to control subsequent price rises and said on Monday it would allow imports from former Soviet Belarus and Kazakhstan of food made from Western raw materials which fall under the embargo.

Vedomosti daily newspaper said Moscow might ban imports of cars, among other things, if the United States and the EU take additional action against it.

The separatist conflict erupted after Russia seized the Crimean peninsula in March, following the ousting of a Moscow-backed Ukrainian president. Separatists occupied key buildings in towns across the Russian-speaking east, declaring “people’s republics” and saying they wanted to join Russia.

The United Nations said this month that an estimated 2,086 people, including civilians and combatants, had been killed in the conflict. The death toll has nearly doubled since the end of July, when Ukrainian forces stepped up their offensive as they gained more ground against the rebels.

A military spokesman in Kyiv said government forces had pressed the separatists in overnight fighting, encircling the rebel-held town of Horlivka between Luhansk and Donetsk, and taking control of smaller settlements in eastern Ukraine.

The military said it suspected the rebels had used a powerful Russian-made Uragan missile system for the first time southeast of Donetsk near the village of Novokaterinivka.

Ukrainian President Petro Poroshenko confirmed that 1,200 fighters and heavy military equipment has been sent to Ukraine “from the side of the Eastern neighbour”.

On 16 August, the so-called Prime Minister of the “People’s Republic of Donetsk”, Alexandr Zaharchenko, said in a video statement that militants of his group received reinforcements from Russia. According to him, this reinforcement consisted of 1,200 fighters who took a four-month training course in Russia, as well as 30 tanks and 120 armored vehicles.

"Today we have to do regrouping, which will protect our territory and to continue the offensive action of the army," Poroshenko is quoted as saying by the Ukrainian press.
Poroshenko stressed that today the task was to cut the system which supplies the “terrorists “with mercenaries, new weapons, ammunition, because in his words through the uncontrolled border areas such supplies continued. According to the President, the tactic now was to "cut the territories controlled by the terrorists, in zones, to narrow them, and not give opportunities for the supply of arms and ammunition".