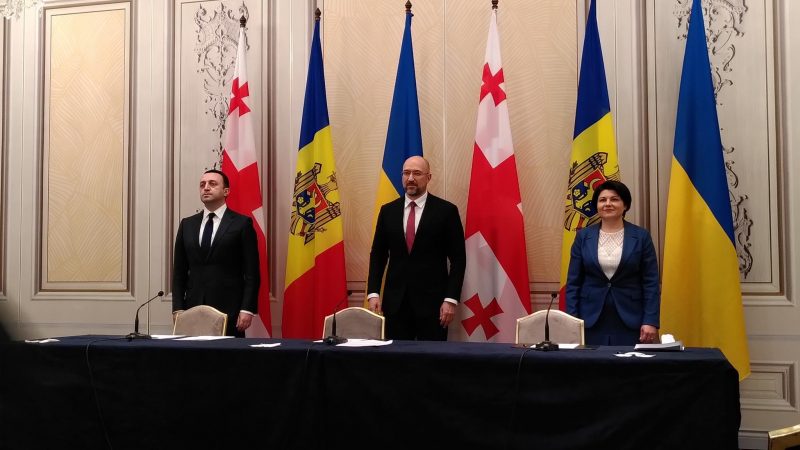 Prime ministers of the self-designated trio of the EU’s Eastern neighbours hoping to one day join the bloc came to Brussels on Tuesday (30 November) in an effort to chart a way forward for their cooperation.

The visit comes ahead of the EU leaders’ summit on 15 December with their counterparts from Armenia, Azerbaijan, Georgia, and Moldova and Ukraine, grouped together under the bloc’s Eastern Partnership (EaP) policy.

Georgia, Moldova, Ukraine, all of whom have EU membership aspirations, have recently banded together to speed up their integration into the bloc after having signed association agreements that deepen their trade and political ties with the EU in exchange for reforms.

“This commitment holds stronger than ever”, Georgian prime minister Irakli Garibashvili told journalists after the heads of governments met with the presidents of the European Commission, Council and Parliament.

So far the initiative, self-described as the “Associated Trio”, has received little support from the Commission, which has barely been able to publicly utter the term up until last summer.

In an apparent nod to assuage fears that the format would leave Armenia and Azerbaijan out in the cold, Ukrainian Prime Minister Denys Shmyhal said the three country’s cooperation “will be complementary to the Eastern Partnership instrument and will not aim at replacing the existing issues”.

According to him, Kyiv is in particular looking for more ties on the green and digital fronts, connectivity, energy security, justice and home affairs, strategic communication and health.

However, the prerequisite for more EU perks will be intensifying the fight against corruption, a persistent issue in the region that was conspicuously absent from the statements of the Ukrainian and Georgian prime ministers.

Moldova’s Natalia Gavrilița, the only one to focus on graft in the press event where journalists could not ask questions, said her country was focusing on “long overdue reforms” that included justice and fighting corruption.

That will be key, as EU officials are usually quick to point out that graft undermines Brussels’ investment, an issue made more acute with the upcoming €2.3 billion EU investment package for the region.

The fight against corruption has “an implication that, if need be, we need to enforce more and more strictly conditionalities”, Luc Devigne, a high-ranking official at the EU’s foreign service (EEAS) responsible for EaP, told civil society representatives at an event on Tuesday (30 November).

“It’s been done in the past that we have frozen — we had to freeze — our assistance due to lack of reforms or backtracking on certain democratic indicators,” he said.

“I think that we see in the EU more and more application of this principle of conditionality because we have seen that sometimes, I would say, it is the only recipe that works,” he added.

Tackling graft will also be necessary for deeper sectoral integration across a wide range of policies sought by the Trio.

A case in point is Ukraine, where last Friday (26 November), Ukrainian president Volodymyr Zelensky accused oligarch Rinat Akhmetov of being involved in a future planned coup attempt, albeit, according to the head of state, that the businessman was being “set up” and “dragged into a war against” Ukraine. Akhmetov rejected the allegations.

Meanwhile, DTEK, Ukraine’s largest energy group owned by Akhmetov, has promised to go to court over what it says are some €97.7 million (UAH 3 billion) that was not repaid as part of the debt settlement transfer by the state to renewable energy producers.

So far, there have been no official statement by the authorities why DTEK has not received payments the company says it is owed.

EURACTIV understands the firm’s representatives will have meetings in the coming days with EU energy chief Kadri Simson’s cabinet as well as other officials from the EU’s diplomatic service.

The issue of greening is high on the EU’s agenda, so issues in the renewable energy market are likely to raise eyebrows in Brussels, which itself advocates for reforms of the energy sector of its neighbourhoods.

For example, two out of ten top EaP targets until 2025 are green, including a goal of 250,000 households in the region that are expected to reduce energy consumption by at least 20% thanks to energy efficiency gains via EU investment.

Out of the €17 billion Brussels hopes its €2.3 billion investment in the coming period into the region will generate, €3.4 billion alone is envisioned for promoting sustainable energy, according to a recent study.

“We truly believe that such a situation does not comply with transparency, equality, and proportionality principles”, CEO of DTEK Renewables Maris Kunickis told EURACTIV.

In his view, the move “gives negative signals regarding huge risks related to investing in Ukraine’s economy, and it will be hard for Ukraine to restore the trust of international investors“.

In Kunickis’s view, “the current scandal in the Ukrainian RES market will negatively impact the further development of the renewables sector as one of the milestones of the decarbonisation course for Ukraine.“