EU and Eastern Partnership (EaP) heads of state and governments as well as European institution leaders met on Thursday  (18 June) to discuss the COVID-19 crisis as well as reaffirm the strategic partnership and discuss its future.

However, the talks with the six partner countries — Armenia, Azerbaijan, Belarus, Georgia, Moldova and Ukraine, — produced few tangible outcomes beyond the announcement that the next physical summit, which will take in Brussel in March 2021.

Council President Charles Michel told reporters following the videoconference that the summit will be an opportunity to consolidate and reinforce the partnership, which is essential for geopolitical reasons.

The leaders agreed that the economy, empowerment though good governance and rule of law, digitalisation, sustainability, and a focus on tangible results for citizens will be the future priority areas.

“If you look at the polls today, the EU is the most trusted foreign institution in all six countries,” Commission President Ursula von der Leyen said.

The three EaP countries that have signed association and deep and comprehensive free trade agreements with the EU  – Georgia, Moldova and Ukraine – are calling for a special format adequate to their ambition to join one day the bloc.

“We say, at first it is important to implement fully the agreements we do have,” Von der Leyen told reporters when pressed on what the EU could offer to the associated partners.

“To really take the full scope of what is possible with in the agreements that have been signed by both sides, this is at the moment being important.”

“The current agreements offer a huge potential because … they represent 70% of the EU acquis”, Michel added.

In what appeared to be a comment on the issue, Ukrainian President Volodymyr Zelensky, who is spearheading the effort for deeper integration of the three associated countries took to Twitter to say that the “Eastern Partnership shouldn’t limit the ambitions of its partners.”

#EasternPartnership shouldn't limit the ambitions of its partners. For some, political dialogue or strategic partnership with @EU is enough, some seek integration with the common market on the basis of 4 freedoms, but #Ukraine seeks full membership of the EU

“For some, political dialogue or strategic partnership with the EU is enough, some seek integration with the common market on the basis of four freedoms, but Ukraine seeks full membership of the EU.”

Noting that Georgia aspires for a full-fledged integration into the EU, the country’s Prime Minister Giorgi Gakharia said he hoped “the EU will support our gradual integration to a single EU market, which will be a key benchmark for the EaP”.

“We expect that an approach based on interests and progress of partners will be maintained. It may involve interaction with countries in a new format by facilitating a sector dialogue, supporting the essential connectivity with a specific focus on the potential of the Black Sea. It should be one of the benchmarks for stimulating the economic welfare and for meeting the connectivity goals of the EU and Asia”, Gakharia said.

With Belarus, leaders raised the issue of the Ostrovets nuclear power plant, which is nearing completion close to the EU border and Lithuania’s capital, Vilnius.

“Today, Belarus said that they are ready to have a peer review on the stress test and in fall, a high level conference should take place on this subject,” von der Leyen said, highlighting the importance of nuclear safety.

“This is a step forward, certainly not the end of the discussions and we’re not at the point where we want to be.”

Avoiding a question on whether the EU is ready to reimpose sanctions on Belarus in light of a series of recent arrests of activists and contenders in the presidential elections to be held in August, the European executive president said “all arbitrarily detained activists must be immediately released. The rule of law must be respected. The Belarusian people are asking for democratic elections.” 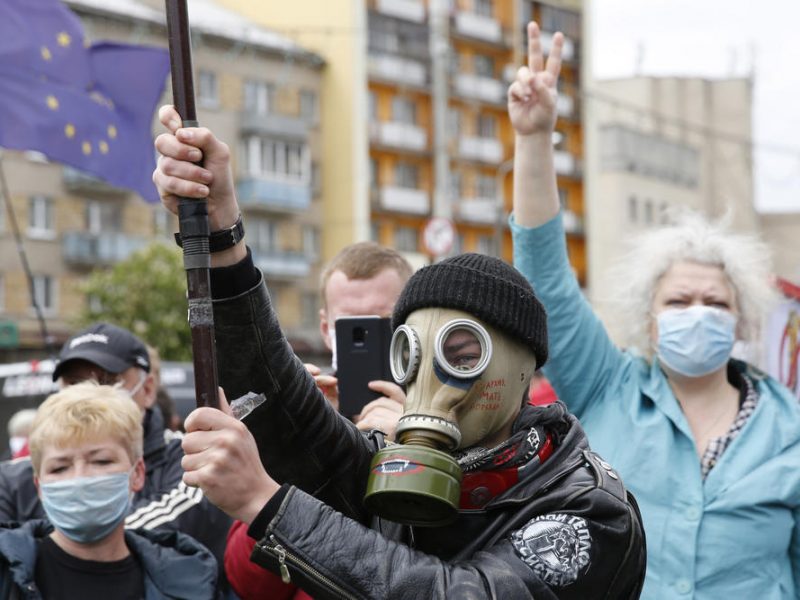 The EU has called for the release of a vlogger arrested in Belarus in May, as the challenges to the more than 25 year-long rule of the country’s strongman Alexander Lukashenko mount in the run-up to the presidential election in …

Belarusian authorities on Thursday detained President Alexander Lukashenko’s rival ahead of August’s election as Minsk intensified a crackdown on the opposition.