Eastern Ukraine drifts away from Kyiv in controversial referendum 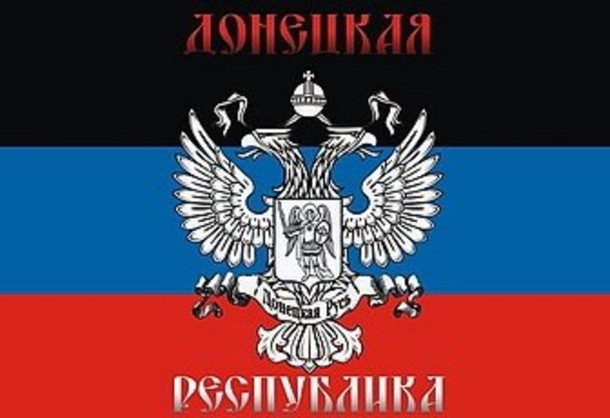 Flag of the so-called Donetsk Republic

Pro-Moscow rebels declared a resounding victory in a referendum on self-rule for eastern Ukraine held Sunday (11 May), with some saying that meant independence and others eventual union with Russia, as fighting flared in a conflict increasingly out of control.

Organizers in the main region holding the makeshift vote said nearly 90% had voted in favor.

Well before polls closed, one separatist leader said the region would form its own state bodies and military after the referendum, formalizing a split that began with the armed takeover of state buildings in a dozen eastern towns last month.

Another said the vote simply showed that the East wanted to decide its own fate, whether in Ukraine, on its own, or as part of Russia.

“Eighty-nine percent, that’s it,” the head of the separatist electoral commission in Donetsk, Roman Lyagin, said by telephone when asked for the result of a vote that the pro-Western Ukrainian government in Kiev has condemned as illegal.

A festive atmosphere at makeshift polling stations in some areas belied the potentially grave implications of the event. In others, clashes broke out between separatists and troops over ballot papers and control of a television tower.

Zhenya Denyesh, a 20-year-old student voting early at a university building in the rebel stronghold of Slaviansk, said: “We all want to live in our own country”. But asked what he thought would follow, he replied: “It will still be war.”

In the southeastern port of Mariupol, scene of fierce fighting last week, there were only eight polling centers for a population of half a million. Queues grew to hundreds of meters in bright sunshine, with spirits high as one center overflowed and ballot boxes were brought onto the street.

On the eastern outskirts, a little over an hour after polls opened, soldiers from Kiev seized what they said were falsified ballot papers, marked with Yes votes, and detained two men.

They refused to hand the men over to policemen who came to take them away, saying they did not trust them. Instead they waited for state security officers to interview and arrest them.

On the edge of Slaviansk, fighting broke out around a television tower shortly before people began making their way through barricades of felled trees, tires and machinery for a vote the West says is being orchestrated by Moscow. The Ukrainian Defense Ministry said one serviceman was wounded.

A man was later reported killed in a clash in the eastern town of Krasnoarmeisk, Interfax-Ukraine news agency said, adding to a toll so far in the dozens but creeping higher by the day.

Western leaders, faced with Russian assertiveness not seen since the Cold War, have threatened more sanctions in the key areas of energy, financial services and engineering if Moscow disrupts a presidential election planned in Ukraine on 25 May.

The European Union also declared the vote illegal on Sunday and may announce some modest measures as soon as Monday, limited by the bloc’s reluctance to upset trade ties with Russia.

Moscow denies any role in the fighting or any ambitions to absorb the mainly Russian-speaking east, an industrial hub, into the Russian Federation following its annexation of the Black Sea peninsula of Crimea after a referendum in March.

But, in a sign it may have set its sights beyond Crimea, Russian Deputy Prime Minister Dmitry Rogozin said he had brought a petition by residents of Moldova’s Russian-speaking breakaway region of Transnistria backing union with Russia.

Ukraine’s Interior Ministry called the eastern referendum a criminal farce, its ballot papers “soaked in blood”. One official said two thirds of the territory had not participated.

Ballot papers in the referendum in the regions of Donetsk, which has declared itself a “People’s Republic”, and the much smaller Luhansk, were printed without security provision, voter registration was patchy and there was confusion over what the vote was for. Separatists in Luhansk said only 5% had voted against.

A man who identified himself as a 33-year-old engineer with the first name of Sergei, voting in the industrial center of Mariupol, said he would answer “Yes” to the question printed in Russian and Ukrainian on the ballot: “Do you support the act of state self-rule of the Donetsk People’s Republic?”

“We’re all for the independence of the Donetsk republic,” he said. “It means leaving behind that fascist, pro-American government [in Kyiv], which brought no one any good.”

But in the same queue of voters, 54-year-old Irina saw a “Yes” vote as endorsement of autonomy within Ukraine.

“I want Donetsk to have its own powers, some kind of autonomy, separate from Kiev. I’m not against a united Ukraine, but not under those people we did not choose, who seized power and are going to ruin the country,” she said.

Others see the vote as a nod to absorption by Russia.

Annexation is favored by the more prominent rebels, but the ambiguity may reflect their fears of an explicit call for full “independence” might not have garnered the support they seek and could leave them in an exposed position towards Kiev.

The present government came to power when President Viktor Yanukovich was toppled in February after mass protests in Kiev.

Pro-Western activists were angered by his decision to discard a cooperation accord with the European Union in favor of closer ties with Moscow. They also accused him of corruption penetrating all areas of the Ukrainian state.

After voting ended in the hastily arranged referendum in 53 locations, the rebels hoped to have the ballots counted by Monday afternoon, although its outcome will not be widely recognized internationally or by Kyiv.

With several hours of polling to go, Russian news agencies were already reporting a turnout of more than 75%, although a separatist spokesman in Luhansk said troops had prevented the movement of ballot papers in several areas.

One way or another it is likely to show a large “yes” vote, and one leading separatist said Ukrainian troops would be declared illegal occupiers once results were announced.

“It is necessary to form state bodies and military authorities as soon as possible,” Denis Pushilin, a leader of the self-styled Donetsk republic said, according to Interfax news agency.

Lyagin, head of the rebel central electoral commission in Donetsk, also took a strong position on the results.

“That can be considered the final and official result,” he said, reporting exact figures of 89.07% for and 10.19% against. “We demand the right to self-determination, and we will get it.”

He said that the result meant Ukraine’s 25 May presidential election would not take place in the Donetsk region.

Speaking to reporters earlier, he had appeared to have a less radical position.

“With the announcement of the results the status of the Donetsk region does not change in absolute terms. We do not cease to be a part of Ukraine, we do not become a part of Russia,” he said, although he left those options open.

Moscow has massed troops on the border and Kyiv fears they may be called in as peacekeepers. Serhiy Pashinsky, head of the Ukrainian presidential administration, said a column of armored vehicles on the Russian side of the border bore the colors of UN peacekeeping forces. He offered no evidence or detail.

Ukrainian leader Oleksander Turchinov has urged eastern political leaders to join a “Round Table” discussion on devolution of powers in Ukraine. But he says he would not negotiate with “terrorists”, a formulation meant to exclude most of the more prominent rebel leaders.

Pashinsky said Ukrainian forces had “destroyed” a separatist base and checkpoints in a broad operation around Slaviansk and nearby Kramatorsk in retaliation for attacks on their posts.

“This is not a referendum. This is a desultory attempt by killers and terrorists to cover their activity,” he said.

Sponsored by the Russian Federation eastern Ukraine’s illegal referendum blatantly violates key principles of democratic voting, stated the Ministry of Internal Affairs of Ukraine. Eyewitnesses and international journalists report of the scarcity of voting cabins, circulation of pre-voted plebiscite ballots, gun threats to local civilians, and blatant negligence of identity and document checks during the voting in the cities of Eastern Ukraine.

“The referendum, scheduled for 11 May in Eastern Ukraine is illegitimate, according to the law of Ukraine. It is aimed only on separating and raising the overall chaos in the country,” commented Jen Psaki, spokesperson for the United States Department of State.

Additionally, the US government called on Russia to withdraw all its troops from Ukraine’s eastern border, which only provoke the military confrontation between the two neighboring states.

Guy Verhofstadt, President of the ALDE Group in the EP and candidate for the Presidency of the Commission said:

'Such so-called referendums have no value and serve no purpose beyond further exacerbating an already tense situation. The so-called referendums not only lack all legitimacy but are also entirely fraudulent in their organisation. They can only be seen as a tool of the pro-Russian separatists. The referendums are nothing more than a provocation and do not seek to provide lasting solutions."

'The only popular consultation that counts will be on 25 May when the citizens of all Ukraine will be able to freely and legitimately decide on their new president. From this moment onwards, the Ukrainian citizens will then be able to discuss the way forwards for the country without any external intervention".

·  2 May: EU ministers to decide on new sanctions;

·  25 May: Presidential elections in Ukraine;