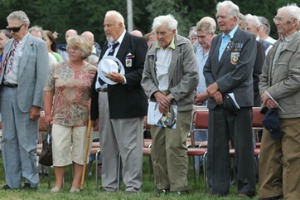 Russia has reacted angrily to a recent gathering in Estonia of World War II veterans attended by the defence minister, saying Estonia was "glorifying" Nazi Waffen SS veterans. Talinn insisted that the event had “nothing in common with recognising Nazism”.

Russia said that the gathering last weekend in Saaremaa was “aimed at glorification of former SS-men and local collaborationists”. According to Moscow, the event could be interpreted in “no other way than intentional propagation of pro-Nazi attitude in Estonian society”.

In a statement, a spokesperson of the Russian Foreign Ministry also called the gathering “undisguised jeering at the memory of those who saved the world from ‘brown plague’ at the expense of their own lives.”

Estonian Defence Minister Urmas Reinsalu denied in a written statement to EURACTIV that the event was a glorification of fascism. A European Commission official said the EU executive would study the situation before reacting.

Russia seems particularly that the Reinsalu delivered a speech at the veterans’ event.

“His expression of gratitude to fascism vassals for ‘saving the honour of Estonian people’ is evidence of ‘mythopoetry’ of the official Tallinn in relation to World War II events,” the Russian spokesperson stated.

Russian media report that among those present were the veterans of the 20th Waffen SS division and other Estonians who fought on the Nazi side in WWII against Soviet occupation of the country.

The Estonian Anti-Fascist Committee, an NGO, accused Reinsalu of “demonstrating to the whole world that Nazi ideology can be justified and those who followed Hitler’s orders can become national heroes”.

“The reason for such negligence to the norms of law and morals is based on only one thing – the higher echelons of power in the European Union are turning a blind eye to neo-Nazi sentiments and refuse to pay attention to the falsification of history and the making of Nazi criminals in Europe into heroes,” the Anti-Fascist Committee stated, quoted by the Russian TV channel RT.

Asked by EURACTIV to comment on the accusations, Reinsalu said in a written answer that the Estonian Parliament recognised “the merits of those who fought in the name of Estonia’s independence”.

On the other hand, he insisted that the Parliament had “unequivocally” condemned the crimes against humanity perpetrated during the Soviet and National Socialist German occupations, “regardless of the citizenship of the perpetrator or where the crimes were carried out”.

The minister further wrote that “the gathering of the Association of Estonian Freedom Fighters held in Saaremaa last week was a civic initiative event to commemorate those who fought for Estonia’s freedom as well as the victims of the occupation regimes. Accusations that depict events held to commemorate the victims of totalitarian regimes as manifestations of neo-Nazism are erroneous and deeply offensive.”

He insisted that his country consistently condemned the crimes of all the totalitarian regimes that occupied Estonia – Nazism and Stalinism – and denounced “all attempts to distort this message”.

In 1939, the Soviet Union and Nazi Germany concluded the Molotov-Ribbentrop Pact, the secret protocols of which divided Central and Eastern Europe into respective spheres of influence.

The same year, Germany launched the Second World War with its attack on Poland and the Soviet Union started to fulfil its role by invading Poland from the east, at the same time concentrating large forces on the borders of the three Baltic States and Finland.

The Soviet Union occupied Estonia along with Latvia and Lithuania in 1940. The Soviet occupation was followed by Estonia’s occupation by Nazi Germany in July 1941. In September 1944 Estonia was again occupied by the Soviet Union. Estonia regained its independence in 1991.

For the most part Estonians were mobilised by force by the totalitarian regimes that occupied Estonia what is against international law.

0 responses to “Estonia fends off Russian accusations of ‘Nazi glorification’”