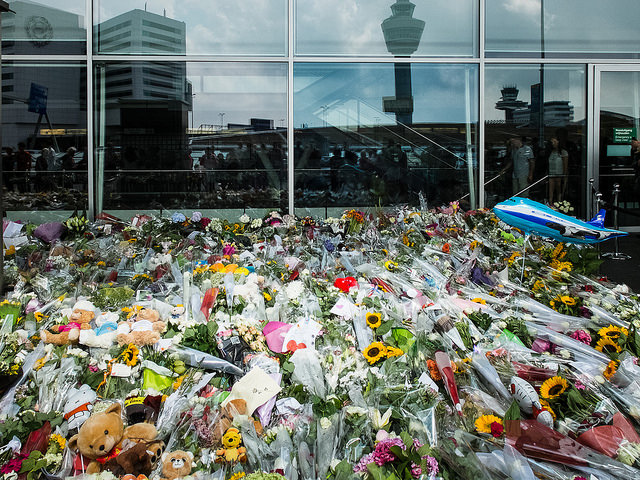 Flowers laid out at Amsterdam's Schiphol airport in memory of the victims of the MH17 tragedy. July 26 2014. [Marco Nedermeijer/Flickr]

The EU had previously agreed sanctions against Russia for destabilizing Ukraine but it was spurred to further, broader action after the July 17 downing of the MH17 Malaysia Airlines flight by pro-Russian rebels.All 298 passengers, including 194 Dutch citizens, died in the tragedy, which saw relations with Moscow plummet to their worst since the Cold War.

The sanctions will last a year but be reviewed in three months. The deal does not require an EU Summit to be approved. Further details are due to come later with the sanctions finalized on Wednesday before being published in the EU Official Journal.

The sanctions include restrictions on access to capital markets for Russian state-owned banks and development finance institutions, diplomats said. Russia is highly dependent on EU capital markets, according to a leaked non-paper, seen by EURACTIV, that diplomats used as the basis for the deal.

By targeting banks with more than 50% state ownership, the EU can increase the cost of raising funds and stop them financing the Russian economy. It will also contribute to a climate of market uncertainty, upping the pressure on Russian President Vladimir Putin.

Restrictions on the export of sensitive technology, including in energy and steel production, were mooted in the talks. Russian gas, on which Europe is dependent, is not part of the sanctions.

A restriction on the exports of dual use technologies – that can be used for both military and civilian purposes – was also agreed by diplomats.

An arms embargo will, if finally agreed by a Council of Ministers decision, only apply to future contracts, meaning France would not be stopped from supplying Russia with two battleships.

But there are fears that the sanctions could cut both ways and affect the eurozone’s sluggish recovery from the financial crisis.

Ambassadors also signed off on a list of Putin’s associates and companies that will face asset freezes under previous measures.

US Secretary of State John Kerry reiterated Tuesday that further US sanctions could come against Russia, amid a climate of increasing pressure on the country (read more below).

Wednesday: Sanctions to be finalised