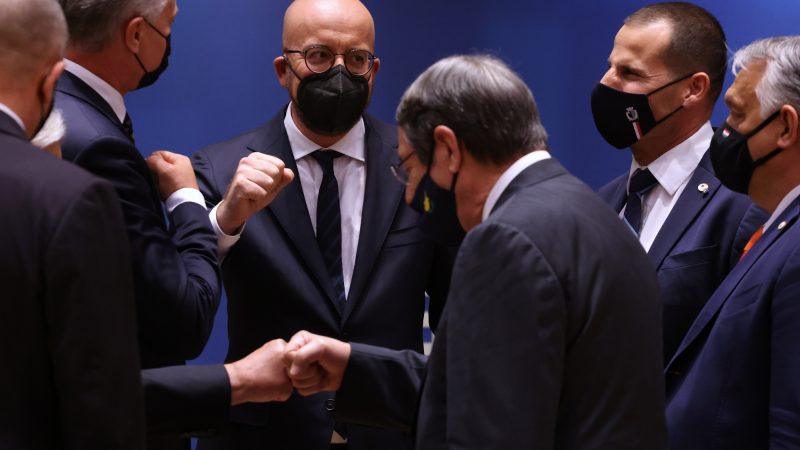 EU member states on Thursday (7 April) green-lighted an embargo on Russian coal and the closing of the bloc’s ports to Russian vessels over Moscow’s war in Ukraine, but attention has already shifted to who may stand in the way of possible future energy sanctions.

An official from the French presidency of the European Council said the latest decision spearheads a “very substantial” fifth round of sanctions against Moscow.

As proposed by the European Commission on Tuesday (5 April), the fifth sanctions package will introduce an embargo on coal from Russia with a four-month grace period to allow for the possibility of current contracts to expire.

It is the first time Europe has targeted the energy sector, on which they are heavily dependent, importing 45% of their coal from Russia at a value of €4 billion a year.

But the embargo will come into force at the beginning of August, 120 days after the publication of the new package in the EU’s official journal, a date that has been a moving target during the discussions.

It was the subject of heated disputes, with especially Poland seeking to shorten this transition period, though unsuccessfully.

The list of Russian products banned from the EU is also being extended to include certain “critical raw materials and equipment” worth an estimated €5.5 billion a year to stop the financing of Moscow’s war effort in Ukraine.

Russian and Belarusian road hauliers are also now banned from operating in the EU.

The sanctions package also includes a €10 billion ban on exports to Russia, including high-tech goods, the freezing of several Russian banks’ assets as well as blacklisting both of Russian President Vladimir Putin’s adult daughters and prominent oligarch Oleg Deripaska, who so far managed to avoid inclusion on the sanction list.

In addition to the sanctions, EU member states also backed a proposal to boost its funding of arms supplies to Ukraine under the European Peace Facility (EPF) by €500 million, the third top-up taking it to a total of €1.5 billion.

European Council President Charles Michel said the package would be “swiftly approved”, which is likely to be this Friday (8 April).

Will oil be next?

“We are working on additional sanctions, including on oil imports, and we are reflecting on some ideas presented by the member states, such as taxes or specific payment channels such as an escrow account,” Von der Leyen said when announcing the fifth package proposal.

Until last week, Germany and Austria had firmly opposed targeting oil or gas.

Berlin, which has spoken about almost complete independence from Russian gas by mid-2024, argued that an immediate and complete embargo would have worse economic and political consequences for the EU than for Russia.

But some EU diplomats say they have seen a ‘growing acceptance’ in Berlin to move on an oil embargo.

Behind closed doors, several EU ambassadors in the discussion had raised the need for such a step this week.

Meanwhile, on Thursday, an overwhelming majority of EU lawmakers demanded an “immediate full embargo” on Russian oil, gas and coal.

European leaders in Brussels, as well as France, Italy, Poland and the Baltics, are all on board to go further in sanctioning Russian energy.

On Thursday, French Economic Minister Bruno Le Maire called for a stop to imports of Russian oil “in a few weeks.”

Italian Prime Minister Mario Draghi on Wednesday had also pushed for further measures, asking Italians: “Do you prefer peace or the air conditioner on? This is the question we have to ask ourselves.”

However, when it comes to Hungary, it has become clear that Budapest could emerge as the single biggest opponent of EU sanctions on Russian oil.

Hungary’s newly re-elected Prime Minister Viktor Orbán has stated publicly he would block sanctions on oil and gas, as it would present a “red line” since cutting off Russian energy imports would “kill Hungary.”

However, some EU diplomats say that considering the country is more dependent on Russian gas than oil, there could be leeway to replace it with other suppliers.

For now, many in Brussels believe that Orban, despite public attacks on Ukraine’s President Volodymyr Zelenskyy and Putin-friendly rhetoric, will not try to veto future EU sanctions on its own.

EU sanctions must be unanimous, but EURACTIV understands that some EU officials have been looking into legal options on how to bypass potential blockages.

One such option includes EU member states, apart from the single objector, imposing the proposed sanctions bilaterally on Moscow.

However, EU officials say such an option would have to be the ‘last resort’, since it would provide a blow to the EU unity the bloc wants to project vis a vis Moscow.

Another consideration would relate to Article 31(2) of the EU Treaty, which under some circumstances allows for qualified majority voting on Common Foreign and Security Policy (CFSP) decisions if it concerns the “Union strategic interests”.

Asked whether it could be applicable also in the case of sanctions, an EU official working on the matter, however, said it would be ‘legally difficult’ as it would ‘depend on under which sanctions regime, and it’s related criteria’ this would fall.

If member states should be willing to move on further energy sanctions, EURACTIV understands the decision would likely be left to EU leaders.