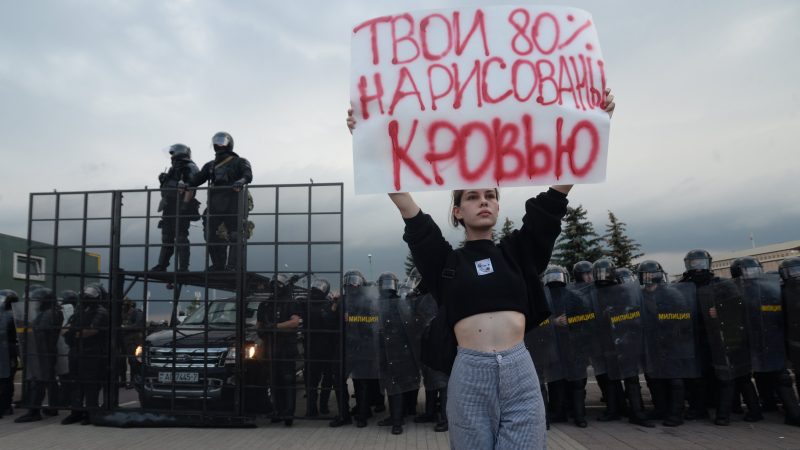 A woman holds a poster 'Your 80 percent are painted with blood' during a protest rally against the results of the presidential elections, in Minsk, Belarus, 30 August 2020. [Stringer/EPA/EFE]

Belarusian President Alexander Lukashenko, who has been in power since 1994, is facing unprecedented protests since the disputed 9 August election in which he claimed a landslide victory with 80% of the vote.

The opposition has rejected the results as manipulated, organised two major demonstrations this month and organized another large-scale protest on Sunday.

Government spokesman Anatoly Glaz said the decision to revoke the media accreditations was taken on the recommendation of the country’s counter-terrorism unit.

He did not specify how many journalists were affected by the measure, but foreign media including the BBC, Reuters and Radio Liberty reported the withdrawal of accreditation of several of their journalists.

A BBC spokesperson confirmed two BBC journalists working for its Russian service in Minsk had had their press accreditation withdrawn with immediate effect.

“We condemn in the strongest possible terms this stifling of independent journalism. We call upon the Belarusian authorities to revoke this decision and allow our journalists to continue doing their jobs,” the BBC said.

“No explanation was provided and we are not aware of any reason for the press credentials to be withdrawn,” said AFP’s Global News Director Phil Chetwynd.

“We call on the authorities to reinstate their accreditations so they can continue to provide independent and impartial reporting of the facts in Belarus.”

And the Associated Press reported that two of its Moscow-based journalists covering events in Belarus had been deported to Russia on Saturday, while their Belarusian journalists had had their press credentials revoked.

“AP calls on the Belarusian government to reinstate the credentials of independent journalists and allow them to continue reporting the facts of what is happening in Belarus to the world,” said Lauren Easton, the AP’s director of media relations.

Belarus: Continued arbitrary restrictions on independent & foreign #media not acceptable.Another attempt by the authorities to cut the free flow of info. Instead of intimidating & hindering media,the authorities should focus on addressing the desires of the 🇧🇾 people.

‘Not afraid any more’

Opposition leader Svetlana Tikhanovskaya has fled to neighbouring Lithuania, an EU nation, after claiming she beat the 65-year-old Lukashenko at the polls and calling for the protests.

She described news of the withdrawn media accreditations as extremely worrying.

“If true, it is another sign that this regime is morally bankrupt and the only way it will attempt to cling onto power is by fear and intimidation,” she said in a statement.

“This tactic will not work. Belarusian people are not afraid any more. We will win. The darkest hour is always before the dawn.”

The US embassy in Minsk also condemned the actions against journalists.

“We stand with the Belarusian people in their aspirations for a democratic, prosperous future and support their call for the government of Belarus to carry out democratic reforms and respect human rights,” it said.

The results of the presidential election have been rejected by the European Union, which is preparing sanctions against high-ranking Belarusian officials and has urged Lukashenko to set up a dialogue with the opposition.

Lukashenko, for his part, has refused to make any concessions and has alleged a Western plot to bring him down.

The demonstrations have sparked a violent police crackdown condemned by rights groups and Western leaders.

At least three people have died and hundreds have been wounded in the violence while nearly 7,000 have been arrested.

Several journalists working in Belarus have been briefly detained since the election.