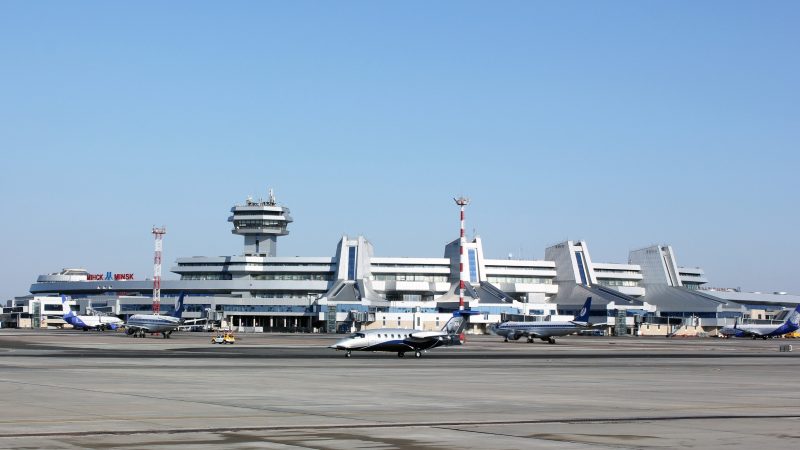 The European Union is considering imposing sanctions on Belarus’ main airport in a bid to make it more difficult for airlines to bring in migrants and exacerbate a crisis on the bloc’s borders, two diplomats said on Thursday (11 November).

The EU has accused Belarus of encouraging migrants to come to its territory then pushing thousands of them to cross into Poland and other neighbouring EU states in retaliation for sanctions imposed on Minsk.

As more migrants massed on the Belarus-Poland border on Thursday, the EU was finalising a new, fifth round of sanctions on top Belarus officials and state-owned airline Belavia that could be approved next week, one diplomat said.

The bloc is also considering a sixth package of asset freezes and travel bans, which could include orders to stop EU firms supplying Minsk National airport, two other diplomats told Reuters.

Belarusian President Alexander Lukashenko, already under international sanctions for cracking down on protests, has threatened to retaliate against any new measures, including by shutting down the transit of natural gas via Belarus.

An extraordinary EU summit of the bloc’s 27 leaders is under consideration, while the bloc is also debating whether to use its common funding mechanisms to build border fencing, according to one of the diplomats who was briefed on a closed-door EU meeting that took place on Wednesday.

One senior diplomat said the sanctions on Minsk airport could choke off EU financing, supplies and equipment. Germany’s Lufthansa Cargo is a ground and cargo handler at Minsk National, according to its website.

No more details on the plan were immediately available.

EU Commission Vice President Margaritis Schinas was in the United Arab Emirates on Thursday as part of a visit to countries in the region whose airlines are operating flights to Belarus, diplomats and officials said.

VP @MargSchinas is in Dubai today – the visit is the first of the Vice-President’s travels to partner countries key in helping put a stop to the unscrupulous instrumentalisation of people by the Lukashenko regime.
Next stop Beirut, others to follow.
👇https://t.co/MpWcZbOjAD

The EU is also debating how to stop Belavia from leasing aircraft from companies including Ireland’s AerCap and Denmark’s Nordic Aviation Capital. Most of Belavia’s 30 aircraft are leased from European operators, industry analysts have said.

Such measures may serve as leverage over Lukashenko in any talks between his government and the United Nations that diplomats said are also under consideration to repatriate Middle Eastern migrants stuck on the Belarus-Polish border.

The Belarusian airport of Hrodna, which is near the Polish and Lithuanian borders, could be an exit point to avoid thousands of people freezing to death at the border during the winter, diplomats said.