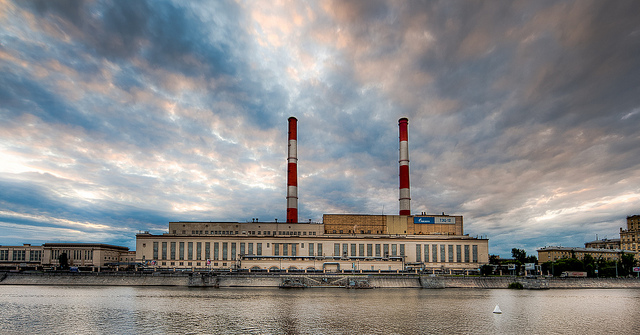 Gazprom facility in Moscow. The state monopoly's control of gas supplies to the EU has driven the push for energy security. [Greg Westfall/Flickr]

The European Union will remain dependent on Russian pipeline gas imports for the “foreseeable future”, the International Energy Agency (IEA) has warned.

As domestic fossil fuel production continues to decline fast, especially in Denmark and the Netherlands, gas imports are expected to increase between 2020 and 2030, according to the IEA’s 2014 review of EU energy policy.

Liquefied natural gas imports to the EU, vital to diversify supply, hit a record low in 2014, half of 2010 levels. Supplies are being re-exported to Asia, leaving the EU with about 70% of spare capacity, the IEA said. US LNG supplies for the medium term had already been sold to Asian markets, which had pushed up import prices.

Unconventional gas, such as shale, could bolster energy security but faced strong political resistance from some member states.

“The EU is set to be dependent on Russian gas for some time and that’s the reality,” the IEA’s executive director Maria van der Hoeven told the European Commission in Brussels today (1 December).

Roughly 15% of EU gas imports arrive through the Ukraine.  Six member states, including Bulgaria and Slovakia, are wholly dependent on Russia’s Gazprom as its only supplier.

The EU is the largest energy importer in the world, importing more than half (53%) of the energy it consumes. But it needed to boost its engagement with producer, transit and consumer countries and adapt quickly to changing global markets, the IEA said.

“To be successful, the European Union needs to achieve greater negotiating power and consistency in its external energy policy,” the IEA added.

The IEA is a global organisation that promotes clean energy and energy security among its member countries.

Liquefied Natural Gas (LNG) imports are “essential” for the EU to diversify its gas supply, the report stated. LNG is the most credible option for supply diversification, next to new Central Asian supplies through the Southern gas corridor, according to the IEA.

Increased competition and gas market integration in Eastern and Southern Europe could be achieved by scaling up pipeline supplies through the Southern gas corridor beyond 2019, the IEA said.

But EU LNG supplies saw a record low in 2014. This was because of delayed global ING investment, strong demand from Asia which has pushed up import prices, and the unavailability of supplies from North Africa.

New US LNG has largely already been bought by Asian markets, and there were limited incentives for the US to serve EU markets in the medium term, the IEA said.

Unconventional gas, such as shale, could help, but faces strong political opposition, the IEA said. Several member states have banned the exploration and development of shale for environmental reasons.

80 bcm of unconventional gas be 2035 could be secured, if there was enough political, regulatory and public support, the IEA said.

The IEA said that information about the environmental impact of shale, and new technologies, was increasing in North America. The EU should harness the US experience as it looked to diversify its supply.

“The EU […] cannot afford to reduce its energy options; nuclear, coal and unconventional gas and oil will need to be part of the mix,” the report said.

At the same time, the EU faced the retirement of half its nuclear generating capacity in the next ten years. Decisions need to be made about uprates, upgrades and lifetime extensions, the IEA said.

Steps in the right direction

There had been some positive developments since the last review in 2008, van der Hoeven said at the report launch.

New gas pipelines, and higher LNG import and gas storage capacity have bolstered the resilience of the EU gas market to short-term disruption. Reverse flows – where European companies sell Russian gas back to, for example, Ukraine – had also helped.

But reverse flows are not available at all interconnections and cross-border access to storage and LNG is “hampered”, the report noted.

Many of the interconnection points are congested due to long-term bookings under existing contracts, according to the IEA.

The EU gas market needs to be liberalised and the EU’s potential to produce natural gas should be re-evaluated. Gas use should be reduced where possible through low-carbon technologies, including renewable energy.

“Energy efficiency is a priority for this Commission,” said Miguel Arias Cañete, Commissioner for Climate and Energy, who was at today’s launch.

The Commission was working to improve infrastructure to better connect and interconnect the gas market, he said.