Belarusian President Alexander Lukashenko (R) arrives at a meeting for economy assessment for 2020 and a draft forecast documents for 2021 in Minsk, Belarus, 7 December 2020. [Pool/EPA/EFE]

The measures, to be formalised with the publication of the list on Thursday, will be the third round of sanctions the European bloc has imposed on the regime of Belarus President Alexander Lukashenko.

Lukashenko, his son, and more than 50 Belarus officials are already under EU sanctions. 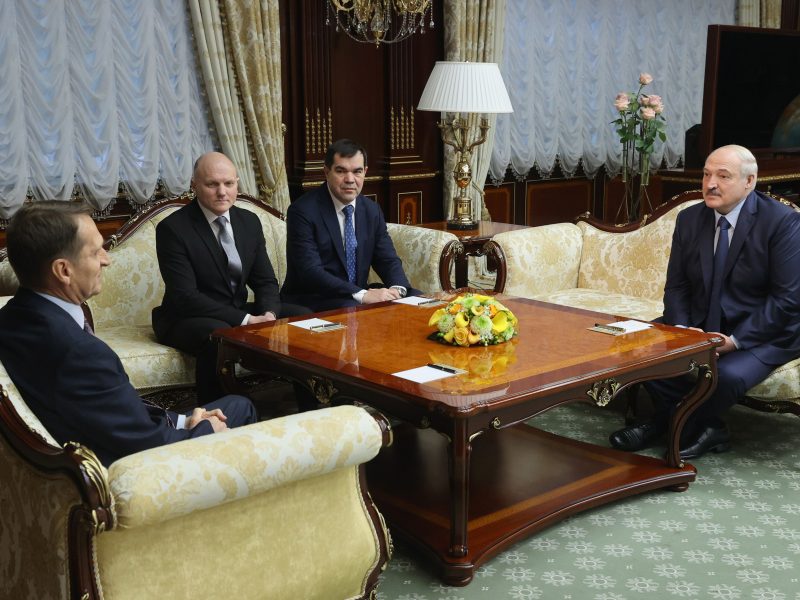 Sources in the European Council and an EU diplomat told AFP that a meeting of ambassadors from the EU’s 27 member states agreed on the latest list of individuals and entities to be sanctioned.

They did not identify them, but their names were to be published in the EU’s official administrative gazette. The measures consist of visa bans and the freezing of assets in the EU.

The ambassadors’ decision came the same day that exiled Belarusian opposition leader, Svetlana Tikhanovskaya, was in Brussels to receive the EU’s top human rights award, the Sakharov Prize, in the European Parliament.

I am honored to award the 2020 #SakharovPrize to the democratic opposition in Belarus and to welcome @Tsihanouskaya and her fellow laureates to the @Europarl_EN. Today we pay tribute to their courage and strength. https://t.co/zddJw2PwmF

The EU has escalated its sanctions as Lukashenko has maintained his repression of opposition activists by deploying security forces to arrest, harass and intimidate them as they continued to protest an August presidential election widely seen as fraudulent.

Belarus has announced it is to close its land border on Sunday, ostensibly to curb the spread of the coronavirus but it triggered alarm in the opposition which sees it as a further clampdown on dissent.

The decree prevents Belarus nationals and foreigners who hold temporary or permanent residency from leaving the country.

Several Belarusian opposition figures have fled across the border into the EU, to Poland, Lithuania and Latvia, in the wake of the crackdown on protests.