EU foreign ministers to raise pressure on Russia over Ukraine 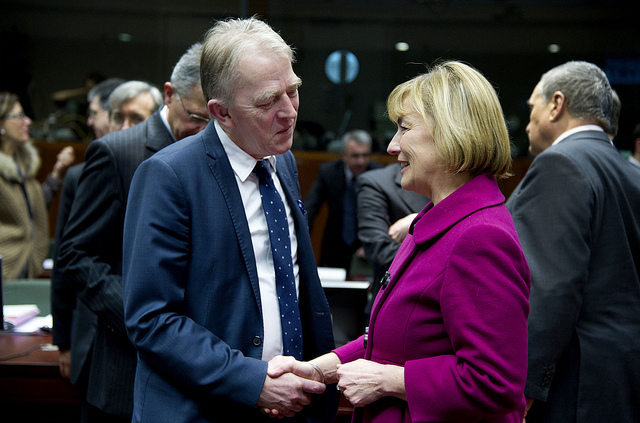 The European Union is set to step up pressure on Russia today (12 May) by taking a first cautious step towards extending sanctions to companies, as well as people, linked to Moscow’s annexation of Ukraine’s Crimea region.

Discussions among EU foreign ministers in Brussels will again be dominated by the Ukraine crisis after pro-Moscow rebels held a referendum on self-rule in parts of eastern Ukraine on Sunday and fighting flared up again.

The EU declared the referendum illegal and said it would not recognise its outcome, but separatist leaders in eastern Ukraine may use the vote to formalise a split with the capital Kiev that began with the armed takeover of state buildings in a dozen eastern towns last month.

Nearly 90% of voters in Donetsk, the larger of two eastern Ukrainian regions where a referendum was held, voted for self-rule, the head of the separatist election commission there said.

Western governments are wary of the similarities to a referendum held in Ukraine’s Crimea in March, a prelude to the region being annexed by Moscow.

Swedish Foreign Minister Carl Bildt said on Twitter on Sunday that: “Figures from fake referendums in eastern Ukraine (are) likely to be fake” and said there was no way of knowing even the voter turnout.

The EU was watching closely to see whether the referendum went ahead after Russian President Vladimir Putin’s call last week for it to be postponed, a call ignored by the separatists.

One EU diplomat said last week that whether the referendum was held would be a crucial indicator of whether Ukraine “slides back into further instability or if there is some kind of progress.”

EU ministers are set to endorse a broadening of the legal criteria for imposing sanctions on Russia, with the goal of making it easier to freeze the assets of companies involved in the Ukraine crisis.

For now, the scope of new sanctions will be limited to firms or other organisations linked to Russia’s annexation of the Ukrainian peninsula of Crimea and the EU will not target high-profile energy firms such as Gazprom.

Using the new expanded criteria, EU officials have prepared a list of 14 people and two Crimean companies active in the energy sector that ministers are likely to add to the EU sanctions list on Monday, EU diplomats say. The identities of the people and firms are being kept confidential for now.

The EU has previously imposed asset freezes and visa bans on 48 Russians and Ukrainians over Moscow’s annexation of Crimea but it would be the first time the bloc has targeted companies.

The EU will remain far behind the United States in the severity of the sanctions that it has imposed on Russia.

The 28 members of the EU, heavily dependent on Russia for energy, are divided over how far to go in seeking to punish Moscow for its actions in Ukraine.

Some EU diplomats say resistance to tougher sanctions within the bloc is growing and there is little appetite for the tough trade sanctions that the EU has threatened to impose on Russia if it further destabilises the situation in Ukraine.

Some EU governments fear tough trade sanctions on Russia could undermine their own economies, just recovering from the financial crisis, and provoke Russian retaliation.

EU officials are increasingly looking to the May 25 presidential election in Ukraine as the next key test and say any attempt by Moscow to undermine credible elections could trigger tougher sanctions by the EU.

“We would be ready to take further sanctions against Russia if the May 25 elections in Ukraine fail,” German Chancellor Angela Merkel said at a news conference with French President Francois Hollande on Saturday.