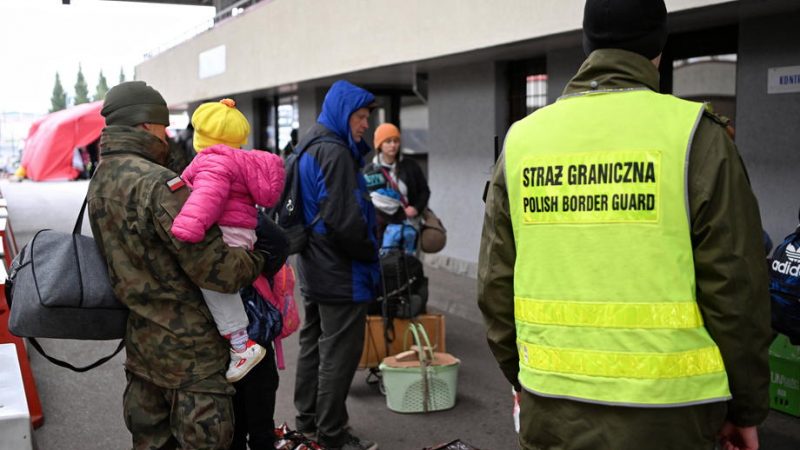 War refugees from Ukraine are assisted by Polish border guards and soldiers at the Polish-Ukrainian border crossing in Korczowa in south-eastern Poland, 05 April 2022. Russian troops entered Ukraine on 24 February resulting in fighting and destruction in the country, and triggering a series of severe economic sanctions on Russia by Western countries. [EPA-EFE/Darek Delmanowicz]

Since Russia invaded Ukraine on 24 February, more than 10 million people have left their homes, including more than four million who fled flee abroad, in Europe’s biggest refugee crisis since the end of World War Two, according to the UN’s refugee agency UNHCR.

More than 2.52 million people have fled through Poland, according to the Polish border guard service, with the Podkarpackie Province alone having accepted around 1.3 million refugees.

Here and elsewhere, commitments on education, housing, jobs and healthcare are starting to stretch the frontline country’s public finances and services, with administrators scrambling for solutions.

“This issue is going to last, not one day, not one week, one month, we are talking about the long term,” Władysław Ortyl, president of the Podkarpackie Region in Poland, told a meeting of local and regional stakeholders on Wednesday (7 April).

Ortyl also said the EU could “no longer hide behind financial procedures” when it comes to help in funding the effort to support frontline countries.

“We need fresh [EU] funds that can deliver, that can respond to the needs of local government and NGOs,” Małgorzata Jarosińska-Jedynak, Poland’s deputy minister for development funds and regional policy, told the same meeting.

Speaking during a visit to Poland’s southeastern town of Rzeszów, the EU Cohesion Commissioner Elisa Ferreira, however, toned down the prospects of fresh EU funds being made available to frontline countries in the future.

“We know that getting more funds requires a lot of negotiations but we must answer the basic question. What do you do with the available ones?” Ferreira told a meeting on regional impacts of the Ukraine war.

Local and regional stakeholders from the EU’s Committee of the Regions were pressing for the bloc to also simplify access to Ukraine funds.

The main issue is that quick and simple access to the EU’s five separate funds is lacking, the institution’s president, Apostolos Tzitzikostas, said, calling for all five to be centred into a simple access point, allowing local governments to rapidly access and distribute the money.

“We call for a Ukrainian refugee local facility to reduce red tape and fast track the deployment of funds by regions and cities,” he said, noting it would replace the five different EU funds currently on offer.

This comes after a European Commission proposal adopted on Monday (4 April) opened the door for more flexibility in the bloc’s structural investment policy.

Member states will now be able to use EU cash leftover from the previous budgetary period of 2014-2020 to feed, clothe, house, employ and educate people fleeing the war in Ukraine.

The logic of extending the funds meant for the EU’s cohesion policy, an investment scheme designed to decrease disparities between the bloc’s regions, is not new. It follows a similar move by the Commission in the wake of the Coronavirus outbreak.

Then, the European executive loosened the rules of the bloc’s cohesion policy, which represents about a third of the EU’s budget, in order to allow unspent money from the 2014-2020 funding period to be re-budgeted to address the immediate fallout from the pandemic.

However, countries now at the front line of receiving Ukrainian refugees are pointing out several problems with this approach.

The Commission’s Cohesion’s Action for Refugees in Europe (CARE) “does not bring any additional financial resources, only more flexibility in the use of existing ones,” a spokesperson of the Czech ministry for regional development told EURACTIV.cz.

“We hope that the European Commission will not stop with this one proposal and will adopt other measures that can benefit a wider range of the member states directly affected by this crisis,” the spokesperson added.

Prague is now calling on the European Commission to extend similar flexibility to the EU’s COVID recovery fund, the Recovery and Resilience Facility”.

Moreover, Czechia calls on the Commission to approve cohesion programmes for 2021-2027 as soon as possible, so the funding from the EU’s new seven-year budget can be used.

“Estimates are underway in the Ministry of Funds and Regional Policy on how much unused money there is that we could redirect to refugees. However, we are talking about amounts in millions or hundreds of millions of euros, not billions, and unfortunately, the needs run into billions”, a Polish diplomat told EURACTIV.pl.

Poland, which has received more than 2.5 million refugees so far, is also pointing out that the funds from the cohesion policy, and from home affairs funds, which can be used for these purposes as well, are not easy to implement and are more likely to help in the long term, for example in improving professional qualifications and language courses.

According to the diplomat, “Poland has therefore appealed for additional EU funds, preferably in a lump sum for the direct costs of hosting refugees”.

Describing the steps taken so far “a sign of goodwill” rather than a long-term solution, they said “these provisions are insufficient and do not respond to the needs of countries facing an influx of people fleeing war.”

Slovakia, another state bordering Ukraine where many are fleeing, has similarly welcomed the funds but said it is unlikely to be enough.

Most of the money in this pot is already contracted for specific projects, with only €818 million left free to use, which could also be directed to help refugees.

“Thanks to this, Slovakia could finance expenditures in areas such as health, education, employment or social affairs, which are related to the humanitarian crisis caused by the war in Ukraine,” said the deputy prime minister charge of regional development, Veronika Remišová.

However, Remišová also pointed out that money from the cohesion policy should primarily serve to reduce regional disparities, to invest in Slovak regions and should only be an additional resource in solving the refugeee crisis.

“Slovakia and other countries in the front line of the refugee crisis need a much larger amount of aid from the European Union, because the remaining EU funds cannot cover all their expenses and, in particular, are not intended to solve this crisis,” she said.

According to her, the EU should provide financial support, as it did during the previous migration crisis in 2015. EU financial assistance for Greece at that time reached €3.4 billion, with 1.2 million refugees, and for Turkey, with a total of 4 million refugees, €6.5 billion.

Remisova discussed the situation with other countries bearing the brunt of caring for Ukrainian refugees.

“We agreed that there is a need to put pressure on the European Commission to find sources of funding to address all the impacts of the migration crisis beyond the CARE package,” Remišová added.

Politicians in the European Parliament took a small step in that direction on Thursday (7 April) when they agreed to increase the amount of money available up-front from the €47.5 billion strong REACT-EU funds, designed to act as a bridge between the loosened COVID-era cohesion rules and the next budgetary period.

This will immediately release around €3.4 billion from the €10 billion earmarked for this year’s spending to pay for infrastructure, housing, equipment, employment, education, social inclusion, healthcare and childcare for refugees.

EU countries bordering Ukraine and those that have received refugees in numbers more than 1% of their national population – that is Austria, Bulgaria, Czechia, and Estonia, will now get 45% of their recovery funds, with invoices to be sent to Brussels later.