Georgian soldiers hold Georgian national flags as they take part in the memorial ceremony to pay tribute to Georgia's soldiers killed in the Russian-South Ossetian-Georgian armed conflict, marking the fourth anniversary of the armed conflict at the memorial cemetery in Tbilisi, Georgia 8 August 2012. [Zurab Kurtsikidze/EPA]

Abkhazia and South Ossetia declared independence from Georgia in August 2008, following a short war between Georgia and Russia, dubbed the first European war of the 21st century.

A 2009 EU investigation said the then President of Georgia, Mikheil Saakashvili, had started the war by ordering an indiscriminate artillery barrage on the rebel city of Tskhinvali.

Russia has expressed satisfaction with an independent report on its five-day war with former Soviet Republic Georgia in August 2008. The report was commissioned by the EU and published yesterday (30 September).

The Russian troops could have easily captured the capital Tbilisi, if the then French President Nicolas Sarkozy hadn’t succeeded to convince the Russian President Dmitry Medvedev to agree to a complete withdrawal of troops from Georgia proper – although Abkhazia and South Ossetia remained outside the scope of the agreement.

Russia also recognised the EU’s role as “guarantor of peace” in the country.

Post-mortem on Europe's first war of the 21st century

Last month’s war between Russia and Georgia has “shattered any remaining illusions over the frontiers of the normative map of Europe,” according to Michael Emerson of the Centre for European Policy Studies (CEPS).

Reportedly, Russia has between 9,000 and 10,000 soldiers on both breakaway territories, which in South Ossetia amounts to one soldier for every eight residents.

The EU has an unarmed civilian monitoring mission dubbed EUMM, deployed since September 2008, following the EU-mediated Six Point Agreement that ended the August war. Headquartered in Tbilisi, it consists of 200 monitors from EU member states who patrol areas in adjacent Abkhazia and South Ossetia, but cannot enter those territories. 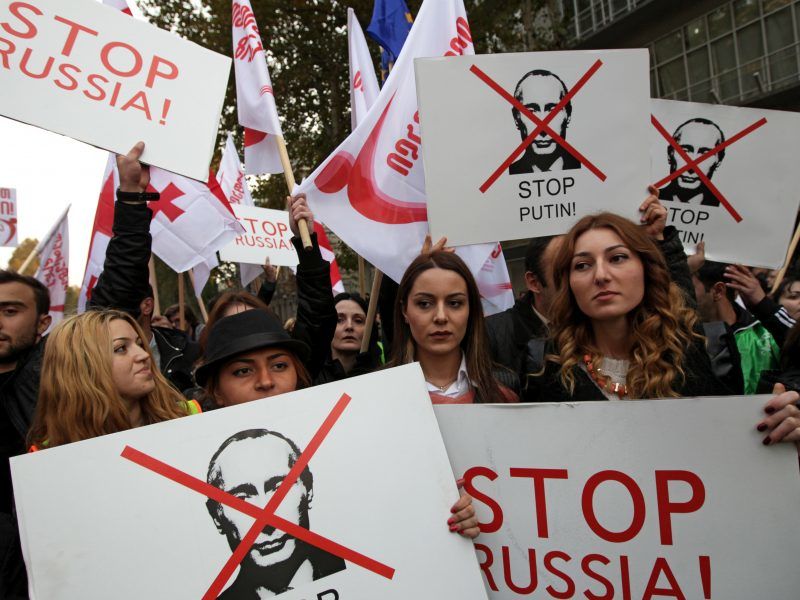 Speaking in the European Parliament, Mogherini said the EU has a very special role to play because of EUMM, the only international monitoring presence in the field. She also said the EU had immediately condemned the recognition of Abkhazia and South Ossetia by Syria.

“[The recognition] is a violation of international law, and it will only make the resolution of the conflict more difficult to achieve,” she stated.

Mogherini said the EU was denouncing “the steps taken by Moscow to consolidate what it calls ‘new realities’ on the ground”. She added: “Among other things, we do not accept Russia’s military build-up in the breakaway entities and its construction of physical barriers on the dividing lines”.

Mogherini also said that together with the OSCE and the United Nations, the EU was continuing to steer the Geneva international discussions to address the consequences of the conflict.

The so-called Geneva International Discussions were launched in October 2008 to address the fallout of the five-day war. They bring together Georgia, Russia, representatives of Abkhazia and of South Ossetia, and the United States.

Georgia has criticised Moscow for its “destructive approach” in recent talks, accusing Russia of driving the discussions “into a deadlock”. Russia has responded, criticising Georgia for turning the diplomatic meeting into “propaganda”. Georgia also believes these talks could achieve better results if they were held at a higher political level.

The EU’s Special Representative for the South Caucasus, Toivo Klaar, an Estonian diplomat who was until last year the head of the Central Asia Division at the European External Action Service (EEAS), co-chairs those talks, with a focus on ensuring security and stability on the ground as well as tackling humanitarian issues.

Mogherini recognised that progress in these discussions was limited but added that in spite of this, the discussions had helped make the security situation on the ground relatively manageable.

The EU special representative said the talks were an opportunity for us to remind participants – starting with the Russian authorities – that the situation is unacceptable.

“It is not only unacceptable for the violation of international law, but first and foremost for the impact it has on all the people in the two entities, elsewhere in Georgia, and in the entire region”, she stated.

Mogherini also said the EU was trying to include the breakaway regions in its programmes whenever possible, assisting civil society initiatives, with the approval of the Georgian authorities.

“Our policy is one of non-recognition but also of engagement with Abkhazia and South Ossetia; exactly in line with the approach of the Georgian government”, she added.

2018 is also the year of the tenth anniversary of the March 2008 NATO summit in Bucharest, when the alliance promised eventual membership to Georgia.

With each succeeding summit, NATO has reaffirmed this commitment. It regularly introduces measures to improve Georgia’s interoperability with the Alliance; in December 2016, Secretary General Jens Stoltenberg declared that Georgia “has all the practical tools to become a member of NATO.”

A NATO summit will take place in Brussels on 11-12 July and Georgia is hopeful that it will be extended an invitation to join the alliance, although its territories are still occupied.

In theory, the occupation prevents NATO from such a move, as Article 5 of the North Atlantic Treaty would require NATO to declare war on Russia for occupying ally territory. But Georgia’s friends in NATO said a creative solution is needed to discourage Russia from creating frozen conflicts aimed at keeping countries away from the Western structures.

The other former Soviet republics around Georgia have other strategic plans. Armenia is an ally to Russia while Azerbaijan, rich in fossil fuels, stays away from military alliances.