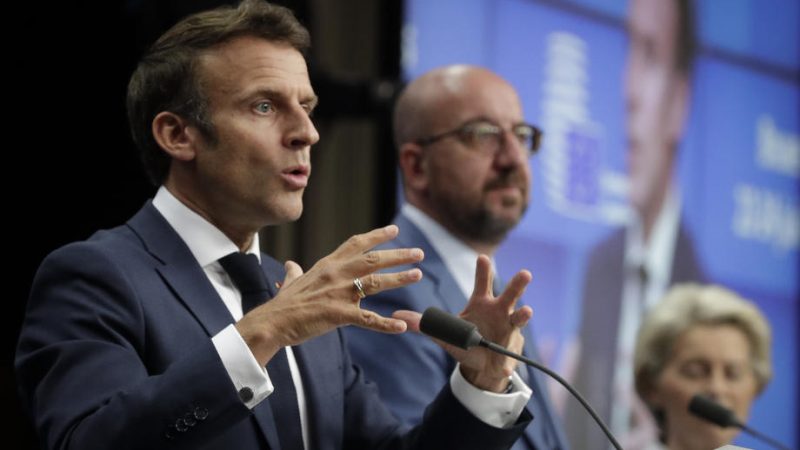 France has its own silver bullet to stabilise the EU’s neighbourhood, and it’s not necessarily enlargement in the first place.

French President Emmanuel Macron on Thursday (23 June) took the opportunity of an EU leaders’ brainstorming session about Europe to promote his proposal to create a so-called “European Political Community”, suggested to the European Parliament in May during a debate about Ukraine’s membership bid.

The idea was to strengthen the bloc’s relationship with non-EU countries in the Western Balkans, or candidate countries such as Ukraine and Moldova, but also those satisfied to be outside the EU’s core framework, such as Switzerland and Norway, and perhaps even former member UK.

In the weeks since then, the general response has been wanting to hear more details from the French side before judgement is passed.

Thursday’s summit discussion on the idea is described as a “brainstorming” session that would kick off a debate between member states stretching over the summer.

It will be looked at “step by step,” the French presidency said, with the aim of an inaugural meeting happening sometime in the latter half of this year.

“The aim is to offer a platform for political coordination for European countries across the continent,” EU leaders said in the summit communiqué after the initial discussion, adding this “could concern all European countries with whom we have close relations”.

“The objective would be to foster political dialogue and cooperation to address issues of common interest to strengthen the security, stability and prosperity of the European continent,” it added.

The format would consist of regular meetings at leaders’ level, which would “create space for political discussions and therefore contribute to mutual understanding and a common strategic culture”, an EU official said.

Reactions to the proposal ranged from interest to wariness.

Most aspirant countries to the bloc, and especially Ukraine, have been warning this should not be an alternative to enlargement or a way to keep them in limbo indefinitely rather than admitting them inside the bloc, before being reassured that was not the case. 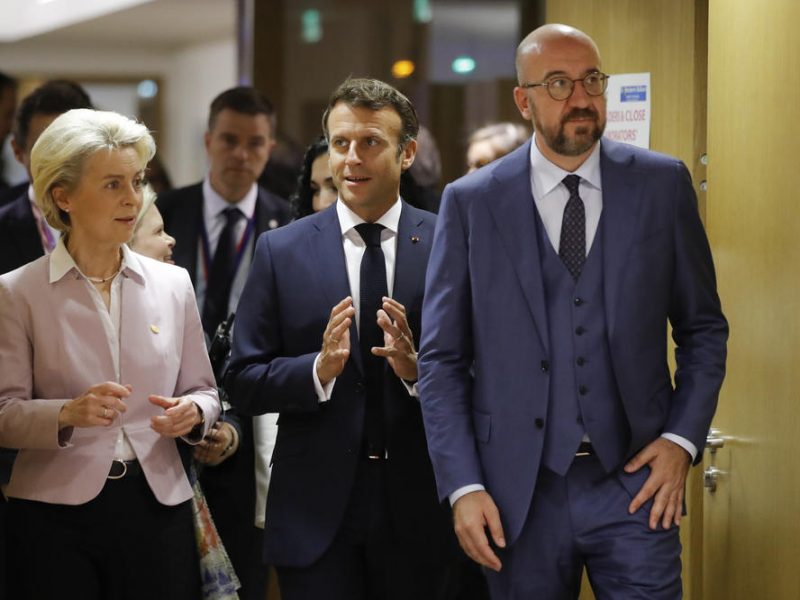 North Macedonia’s Prime Minister Dimitar Kovacevski, speaking in Brussels after the EU-Western Balkans earlier on Thursday, hailed the initiative but said it “should not and must not be a substitute for full EU membership”.

“Such a framework will not replace existing EU policies and instruments, notably enlargement, and will fully respect the EU’s decision-making autonomy,” EU leaders added said in their summit declaration.

“It is no substitute, but you cannot discuss one without the other and what the obstacles are with enlargement,” one EU diplomat told reporters before the leaders’ discussion on Thursday.

“Likewise, we should also be clear that all that share common values and interests should be there,” the EU diplomat added.

Germany and others stress it should not overlap with the work of the Organisation for Security and Cooperation in Europe (OSCE), the world’s largest regional security-oriented intergovernmental organisation of which most of its 57 members come from Wider Europe, currently sidelined because of Russia’s war in Ukraine.

Many member states acknowledge that some sort of forum where European countries can get together to discuss strategic issues confronting all of them could be worthwhile.

An Elysée official told reporters optimistically that the idea was “being welcomed more and more positively”.

While the number of candidate country is enlarging, there has been no proper enlargement since Croatia joined the EU almost 10 years ago.

On the sidelines of the triumphant rhetoric over Ukraine and Moldova’s granting of EU candidate status, EU leaders in Brussels also faced furious Western Balkan counterparts, highly frustrated about the lack of their own progress and long delay encountered in their membership bids.

There was particular dissatisfaction over Bulgaria’s long-standing veto of North Macedonia. 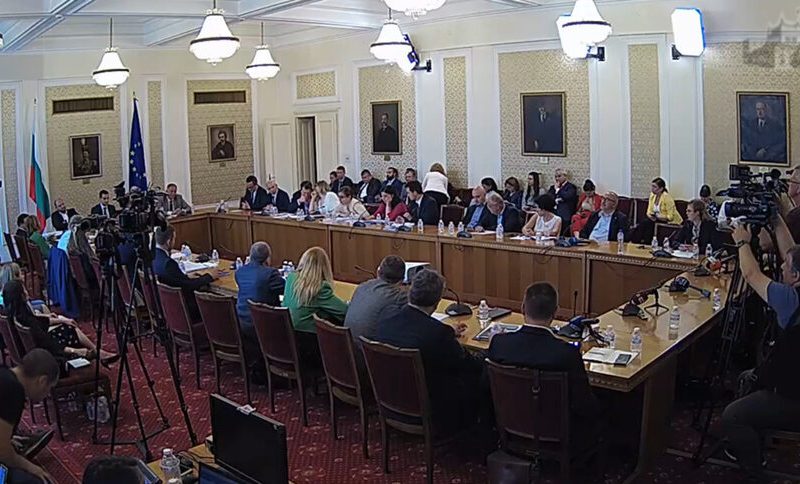 The foreign affairs committee of the Bulgarian parliament on Thursday (23 June) passed a draft decision approving the French Presidency compromise for Sofia to lift its veto on Skopje to start accession talks, paving the way for the text potentially being approved in plenary on Friday.

Macron’s words on Thursday night on Ukraine’s and Moldova’s ‘European perspective’ after the granting of EU candidate status to both countries also sounded in parts also like a warning to be careful with the concept of EU enlargement in general.

Macron hailed the move as a sign of “a strong and united Europe” in the face of Russia’s aggression against its neighbour.

He added the EU had to “give a helping hand” to Ukraine, saying the step was the right response now in the context of war.

However, he added that “we don’t all have to live in the same house, but we share the same street,” noting that Europe’s “strategic intimacy” should not be undermined.

“The geopolitical response in the context of the war is indeed to continue to offer this perspective. Is it that over time, the right geopolitical perspective? I tell you frankly, as I did three years ago – no,” Macron said, when asked by reporters about his stance on enlargement.

“Because it will take time and because we see a phenomenon of some sort of fatigue of enlargement among the countries that have joined,” he added, suggesting a broader construct like the “European Political Community” could be “the right response” in the meantime “to stabilise the neighbourhood”. 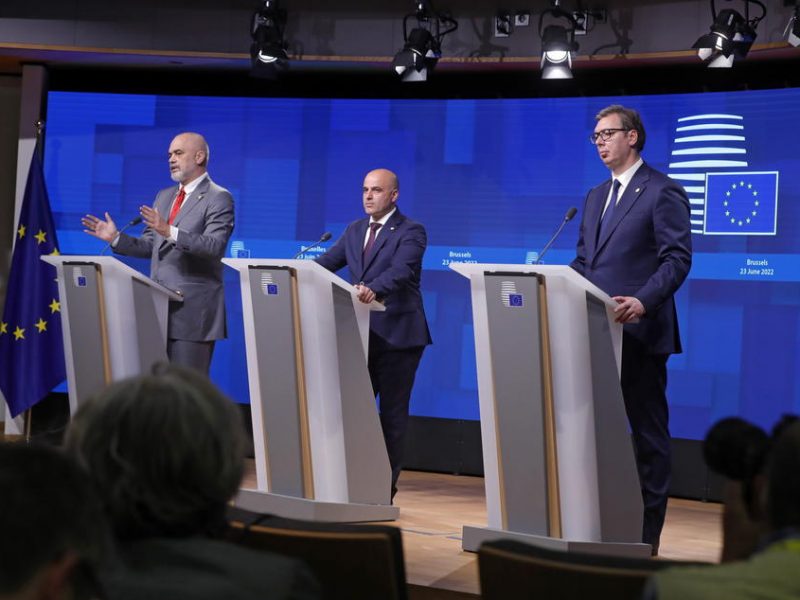 On the sidelines of the triumphant rhetoric over Ukraine and Moldova’s imminent granting of EU candidate status, EU leaders meeting in Brussels on Thursday (23 June) faced furious Western Balkan counterparts, highly frustrated about the lack of their own progress on the EU path.

Older diplomats and journalists remember that the French initiative has deep roots from the times when François Mitterrand as President of France and Jacques Delors as Commission President advocated for a European confederation.