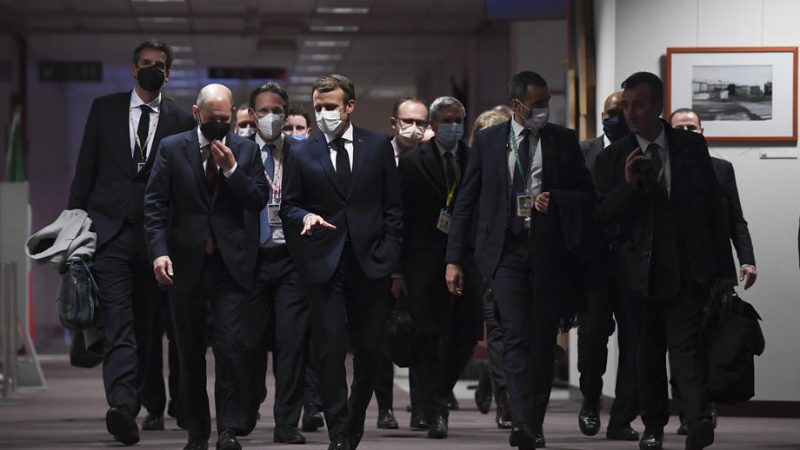 EU leaders on Thursday (16 December) agreed to coordinate with allies over potential sanctions against Russia in the event of further military aggression on Ukraine. The issue remains to define what level of escalation would trigger what sort of response.

“Our concerns related to Russia’s military build-up on the eastern Ukrainian borders are well known, our position is very clear,” European Commission Ursula von der Leyen said after the talks.

“Let there be no doubt,” she said. “If Russia were to move against Ukraine, the EU will be in a position to take sanctions that could extract a massive cost. We have done our work in that respect,”  she added.

According to the final summit conclusions, EU leaders have threatened Russia with “massive consequences,” “severe cost” and internationally coordinated sanctions in the event of further military aggression on Ukraine.

The EU is ‘almost on a weekly basis’ consulting with the US in video conferences on future coordination of sanctions and will be working very closely with NATO, EU sources additionally said.

Russia had violated Ukraine’s territorial integrity in 2014 with an invasion and the annexation of the Crimean Peninsula.

“Any further aggression against Ukraine will have massive consequences and severe cost in response, including restrictive measures coordinated with partners,” the document added.

The general notion is that the EU’s diplomatic language has been reinforced, with ‘restrictive measures’ opening the door ‘for a range of options’, an EU source said.

Ukraine’s President Volodymyr Zelenskiy a day before said that while most EU leaders understand and support Ukraine’s position in the conflict, he is frustrated that European powers have refused to take pre-emptive action against Russia, instead threatening to respond in the event of military action.

The summit declaration itself did not specify what measures could be intended, though EU officials and diplomats in the past days have named sanctions against Russia’s financial and economic sectors as part of the options.

A European Parliament resolution this week demanded to include a suspension from the SWIFT system, a messaging network used by 11,000 banks in 200 countries to make cross-border payments, in a future Russia sanctions framework should it become necessary.

Some have called this the ‘nuclear option’ since it would be an unprecedented move, only used once in 2012 to disconnect Iranian banks after they were blacklisted by the West over the Iran nuclear deal spat.

European Commission President Ursula von der Leyen’s ‘option paper’ on specific sanction measures has not been presented to EU leaders, one EU diplomat confirmed, adding that “they were OK with this since it was not the right time and place”.

One uncertainty with the communiqué language remains over whether the EU will be able to agree upon a definition of what would constitute “any further aggression” by Russia.

The phrase also was unlikely to be further predefined, EU diplomats told EURACTIV over the course of the night, since then there would be no threat potential left, so the rationale.

“You don’t want to put pre-emptive restrictive measures on the table before something has happened,” one EU diplomat told EURACTIV.

“Otherwise, what do you have left to act upon? What if none of the Russian troops moves, but some green little men start sparking unrest in the Donbas?”

However, this also leaves the door open to ‘sneak out’ from any commitments in case of a hybrid scenario, Ukraine and some Eastern member states fear.

EU diplomats confirmed to EURACTIV that the mistrust in Germany to potentially backtrack from the discussion about using measures in such a situation prevails.

“I still think that if such a scenario happens, even Germany will have to become serious,” one Western European diplomat assured.

Where do France and Germany stand?

In their conclusions on Thursday evening, EU leaders also reiterated their commitment to the so-called ‘Normandy Format’ peace talks led by France and Germany.

“The European Council encourages diplomatic efforts and supports the Normandy Format in achieving the full implementation of the Minsk Agreements,” the leaders stated.

However, Moscow in recent months did not participate in any high-level meeting of the format.

The initiative so far has born no solution to the security situation in Ukraine’s East, with ceasefire violations and skirmishes continuing on a daily basis, according to the OSCE monitoring mission on the ground.

French and German leaders sought to revive talks under the so-called “Normandy Format” that also includes Russia and is aimed at implementing the Minsk II peace accords to end the war in Ukraine’s East.
Earlier on Wednesday  (15 December), on the sidelines of an Eastern Partnership summit meeting in Brussels, German Chancellor Olaf Scholz and French President Emmanuel Macron had met individually with Ukraine’s President Volodymyr Zelenskiy, as well as all together in a group.

The sideline diplomacy, together with the enforced language in Thursday’s summit document, however, could not hide inconsistencies that some member states might have as to where to place dialogue with Russia.

Speaking alongside German Chancellor Olaf Scholz in a joint presser after the summit, French President Emmanuel Macron said that for progress in the Normandy format, it would be also on Ukraine to move.

“We believe that proposals need to be made on the part of President Zelenskiy to make headway in that regard,” he said.

At the same time, Scholz faced calls from some EU leaders to threaten Moscow with the termination of Nord Stream 2.

While Scholz emphasised that it is a “private sector project” where only “questions of detail have to be solved,” Macron said that the discussion is “nothing new” and that the future of the pipeline is not linked to “current problems.”