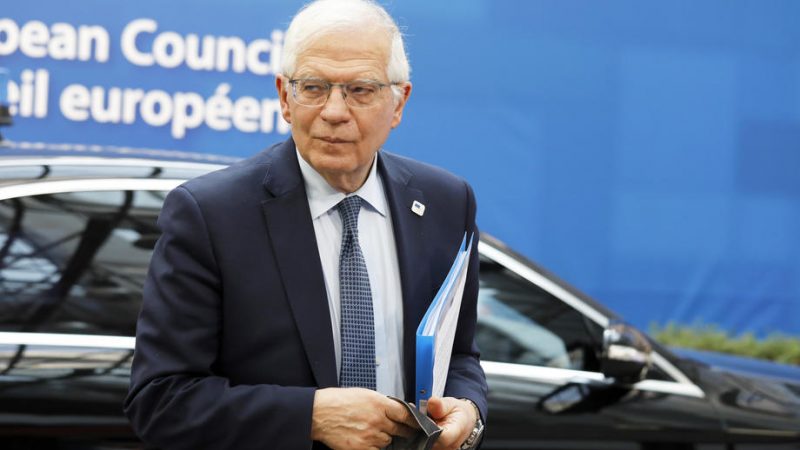 The EU is urgently discussing a new round of sanctions on Russia, the bloc said on Monday (4 April) as it condemned “atrocities” reported in Ukrainian towns Moscow’s troops had occupied.

The EU “will advance, as a matter of urgency, work on further sanctions against Russia,” the bloc’s chief diplomat Josep Borrell said in a statement on behalf of the bloc.

“We stand in full solidarity with Ukraine and the Ukrainian people in these sombre hours for the whole world,” he said.

The calls for a new round of sanctions to hit Russia’s economy emerged after reports of potential war crimes surfaced following the discovery of hundreds of bodies, some bound and shot at close range, around towns near Kyiv. The macabre discoveries were made after Kremlin forces withdrew in recent days.

Borrell said in his statement that the EU “condemns in the strongest possible terms” the atrocities reported in Ukrainian towns, including the town of Bucha.

“The massacres in the town of Bucha and other Ukrainian towns will be inscribed in the list of atrocities committed on European soil,” Borrell said.

He added that “the Russian authorities are responsible for these atrocities, committed while they had effective control of the area”.

EU foreign ministers could potentially stand ready to approve the fifth package of sanctions when they meet for a NATO foreign ministerial on Wednesday and Thursday this week or at their regular meeting next Monday (11 April) in Luxembourg.

Earlier on Sunday, European leaders threatened deeper sanctions in response to the horrors reported over the weekend.

European Council President, Charles Michel, said he was “shocked by haunting images of atrocities committed by [the] Russian army.”

“Further EU sanctions and support are on their way,” he tweeted.

The European Commission could put out a proposal for the fifth sanctions package on Russia as soon as Wednesday, which would be primarily meant to close loopholes from the previous four rounds of punitive measures against Moscow, several EU diplomats confirmed.

Further measures could include more oligarchs being named, a ban on Russian ships using EU ports, and potentially more export restrictions and embargoes on energy supplies such as coal, oil or gas.

“But it has become more than clear that Bucha has again created momentum and willingness to strengthen our sanctions resolve yet again,” one EU diplomat said.

Lithuania, Latvia and Estonia announced on Saturday (2 April) that they would no longer import Russian gas to meet domestic needs, becoming the first EU states to secure independence from Russian supplies.

Polish Prime Minister Mateusz Morawiecki called for a special EU summit this week, but the proposal has not gained traction.

Germany, however, remains the lynchpin in discussing how far a new sanctions package would go, especially when it comes to targetting Russian energy supplies.

Both Italy and Germany are among the EU members most dependent on Russian gas.

German Foreign Minister Annalena Baerbock vowed on Sunday to “intensify sanctions against Russia and provide even more support for the defence of Ukraine”. In contrast, the country’s Defence Minister Christiane Lambrecht said the EU must discuss banning the import of Russian gas in light of the reported atrocities.

“We will decide on further measures in the circle of allies in the coming days,” Germany’s Chancellor Olaf Scholz said on Sunday, adding that “Putin and his supporters will feel the consequences.”

Scholz, however, fell short of specifying whether this would mean Berlin is ready to move away from its blockage of energy sanctions.

A German government spokesperson on Monday told reporters Germany and its international partners will agree further sanctions on Russia ‘in the coming days’.

“We will decide further measures in the coming days, consulting our allies beforehand,” the spokesperson told reporters. “(Russian) President (Vladimir) Putin and his supporters will feel the consequences of these further sanctions.”

An economy ministry spokesperson said a gas embargo would have economic consequences for Germany, and so it should act prudently. The ministry was looking at the “complex” situation of Gazprom and Rosneft units in Germany, she added.

As of Monday, several member states have reached out to their representatives in Germany to enquire whether Berlin would be ready to enforce sanctions on coal as the minimum consensus, an EU diplomat confirmed.

French President Emmanuel Macron, on the other hand, said he would be “in favour of a round of sanctions, particularly on coal and oil which we know are particularly harmful.”