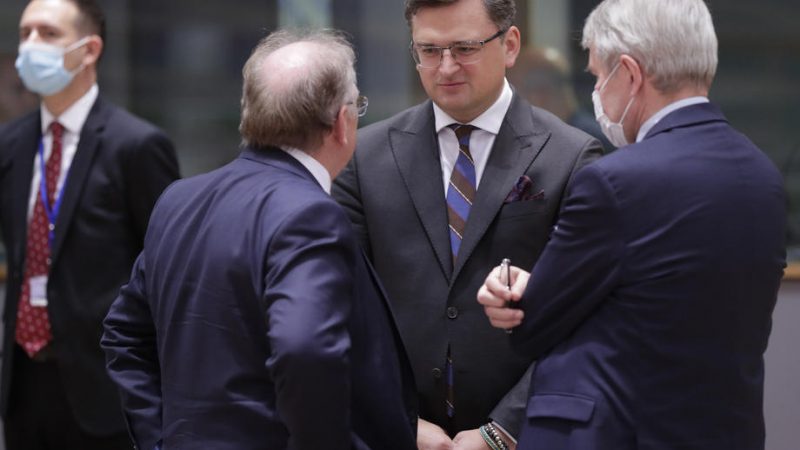 Arriving at the meeting between the foreign ministers from the EU’s Eastern Partnership countries and top Brussels representatives, Ukraine’s Foreign Minister Dmytro Kuleba warned of increased Russian military presence in the annexed Crimea and some areas of Donetsk and Luhansk in war-torn eastern Ukraine.

The other members of the Eastern Partnership are Armenia, Azerbaijan, Georgia, and Moldova. Belarus has walked out from participating in the policy over EU sanctions this summer.

Last week, Ukraine’s Defence Ministry said an estimated 90,000 Russian troops were located “near the border and in the temporarily occupied territories” as well as in the Black Sea, according to Reuters.

Kyiv’s top diplomat said that “this military buildup should not be seen in isolation from other crises and tensions happening in Europe”.

Besides the Belarus crisis, Kuleba pointed to the soaring energy prices and disinformation campaigns as “all part of a broader strategy of Russia to shatter Europe”.

Earlier on Monday, Kuleba met with NATO Secretary-General Jens Stoltenberg, who also said there had been a “large and unusual” concentration of Russian troops on Ukraine’s borders in recent weeks.

“We see an unusual concentration of forces … of Russian military capabilities,” Stoltenberg told reporters, speaking alongside Kuleba in Brussels.

“The fact that we see this military buildup also reduces any warning time between a decision in Russia before they are able to actually conduct a military aggressive action against Ukraine,” Stoltenberg said.

Stoltenberg declined to speculate about Moscow’s intentions but added: “We see an unusual concentration of troops and we know that Russia has been willing to use these types of military capabilities before to conduct aggressive actions against Ukraine.”

Speaking about the troops in Ukraine’s border regions, Stoltenberg said those would be “partly forces close to the border between Russia and Ukraine, but it is also partly troops and capabilities which are inside Ukraine, meaning they are in Crimea, which is illegally annexed, and also we see the militants, the separatists in Donbas, which is also part of Ukraine, supported and helped by Russia.”

Stressing that the important thing now was to prevent situations from spiralling out of control, he urged Russia to be transparent about military activities to reduce tensions and prevent an escalation.

“It is very likely that Ukraine could be attacked while we are dealing with a situation on the Polish, Lithuanian and Belarusian border,” he said.

Speaking to reporters before the EU foreign affairs ministers meeting in Brussels on Monday, Landsbergis also warned that Russia could also put a “permanent Russian military presence in the territory of Belarus.”

Landsbergis said the Kremlin “can go either way”, basing his analysis on the geography of Russian military presence.

“By time being, we are not talking about military”, he said.