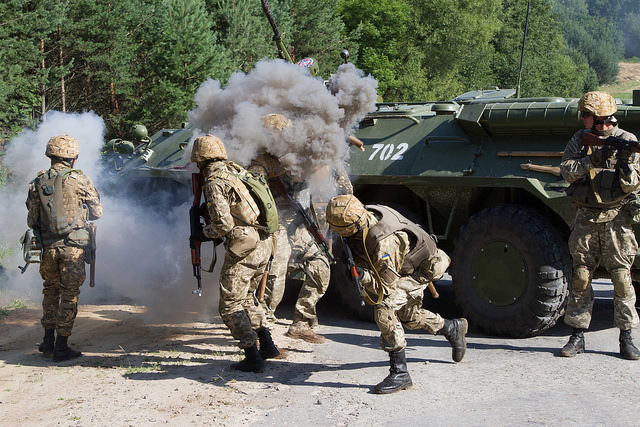 The European Union pressed Ukraine authorities yesterday (18 January) to overcome political feuding and implement promised reforms as it looks to shore up the country’s democratic and economic credentials.

Having so far failed to end the Russian-backed war in eastern Ukraine, Kyiv’s western supporters are now seeking to shift the focus onto modernisation, concerned that the West’s huge political investment in Ukraine could go to waste.

“We understand the pressures the Ukrainian government is under internally,” said Britain’s Foreign Secretary Philip Hammond at a meeting of EU foreign ministers. “But we continually remind them of their obligations under Minsk,” Hammond told reporters, referring to the peace deal signed in February last year in the Belarusian capital.

Reforms tied to the Minsk accord, which was extended beyond its end-2015 deadline, would give Kyiv more credibility, Hammond said (see background).

Russia denies it has provided weapons to the rebels or that it has troops engaged in the conflict that has killed more than 8,000 people since it broke out April 2014, following Russia’s annexation of Ukraine’s Crimea peninsula.

Rebels and the Ukrainians complain of violations of the ceasefire negotiated as part of the Minsk deal. Both say heavy artillery, meant to have been withdrawn, is still being used.

Seeking to cement Ukraine’s historic shift away from Russia, senior US and EU officials are trying to help Ukraine’s leadership modernise the former Soviet state, where the shadow economy accounts more than half of output by some estimates.

In a note seen by Reuters on Monday, nine EU countries including Germany and Britain said Europe needed to show even more support for Ukraine, as well as calling for reforms.

While political rifts and the danger of the ruling Ukrainian coalition breaking up is less of an imminent threat since the government passed a 2016 draft budget in late December, other difficult reforms outside of the Minsk accord, ranging from the tax code to the judiciary, are pending.

“There are deficits in the justice system, especially in the fight against corruption,” German Foreign Minister Frank-Walter Steinmeier told a news conference. “That has to be corrected as soon as possible … Ukraine has to become more attractive for foreign investors.”

Ukraine has already received almost $10 billion in 2015 from the International Monetary Fund and other international lenders to shore up its finances, crippled by the conflict and years of mismanagement and corruption.

One response to “EU presses Ukraine to deliver on Minsk agreement”